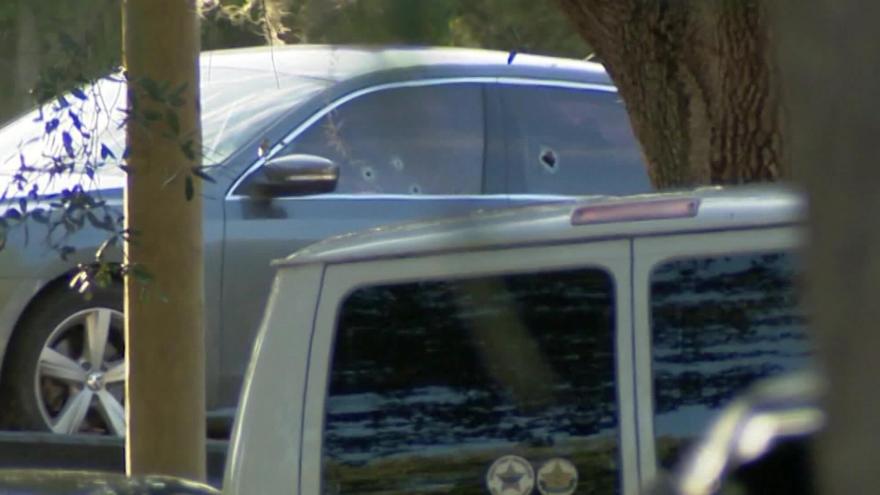 Bullet holes are seen in the windows of the car involved in the fatal shooting in Cocoa, Florida.

(CNN) -- Four days after a sheriff's deputy fatally shot two Black teenagers in the coastal Florida city of Cocoa, prompting a state investigation and outrage in a community demanding answers, authorities released a 56-second dashcam video of the deadly encounter.

The video clip, posted on the Brevard County Sheriff's Facebook page Tuesday evening, shows deputies attempting to stop a car last Friday after what Sheriff Wayne Ivey said was an investigation into a possible stolen vehicle.

The footage shows two marked sheriff's cruisers following the car carrying the teenagers through a residential neighborhood as it pulls into a driveway before the driver backs out and faces two deputies with their guns drawn.

A deputy is heard on the camera's audio commanding the driver at least eight times to stop. There is no audio for the first 36 seconds of the video.

In a statement released with the video, Ivey said the driver "turns and accelerates the vehicle" toward the deputy, who was "then forced to fire his service weapon in an attempt to stop the deadly threat of the car from crashing into him."

Ivey said, "You can actually see the tires of the vehicle turn sharply as the car accelerates" toward the deputy, who was "in immediate danger of being struck by the vehicle." The sheriff said two firearms were recovered in the car. There were at least three occupants.

The teenagers who were killed were identified as Sincere Pierce, 18, and Angelo Crooms, 16, who the sheriff said was the driver.

Until Tuesday, authorities had provided few details about the deaths of the two young men -- which occurred amid a national reckoning over racial injustice in America, following the police killings of other Black men and women such as George Floyd in Minneapolis and Breonna Taylor in Louisville, Kentucky, among others.

National civil rights attorney Benjamin Crump, who is representing the families of Floyd and Taylor, announced Monday he has been retained by the Cocoa teenagers' families and said he has asked for a US Justice Department investigation. CNN has reached out to DOJ for comment on Crump's request.

Crump said Wednesday that it was "painfully troubling to us that this teen driver and the teen backseat passenger were terrified and drove around deputies who approached the vehicle with guns drawn." The deputy continued firing "as the car cleared him and posed no threat," the attorney said in a statement.

"Claiming that this deputy discharged 10 shots to get himself out of harm's way is a clear attempt to justify the killing of these teens," Crump said.

"This disturbing incident, which cost the lives of two Black teens, again documents the dangers of driving or even riding while Black -- since the deputy also shot into the backseat, killing a passenger."

Crump demanded that the sheriff's office release all footage related to the case, including dashcam video from the other cruiser as well as neighborhood surveillance footage.

"These parents are heartbroken, as any parents would be," the attorney said in a statement before the video's release. "They deserve full transparency and speedy answers about who is responsible for the deaths and the circumstances surrounding their shootings."

The Florida Department of Law Enforcement (FDLE) said in a statement it's investigating the shooting and reviewing videos and forensic evidence. The agency was also awaiting autopsy findings.

"We continue to conduct interviews and hope to be finished with the initial interviews soon," FDLE spokeswoman Jessica Cary said in a statement. "Once we have completed our investigative reports, we provide that information to the state attorney's office and they determine whether or not charges will be filed. FDLE's investigation is limited to the officer's use of force."

The sheriff's office said in an nitial statement on Monday that the shooting took place about 10:30 a.m. Friday while deputies were investigating "an earlier incident in which a vehicle fled from an attempted traffic stop."

The wounded teenagers were transported from the scene to local hospitals, where they were pronounced dead, the statement said.

Ivey on Tuesday identified the responding deputies as Jafet Santiago-Miranda, who has been on the job since February 2017, and Carson Hendren, who has been with the sheriff's office since June 2018. As is standard practice, the deputies were on paid administrative leave pending the outcome of the investigation.

Santiago-Miranda was the deputy who fired his service weapon at the car, Ivey said.

The sheriff said a third person in the car "provided a thorough statement to FDLE that confirms the occupants of the vehicle heard the verbal commands of the Deputy and that Crooms still turned the vehicle and accelerated."

The FDLE said it did not have any additional comment on Wednesday in response to the video being released.

CNN reached out to the Brevard County Fraternal Order of Police for comment.

In a plea for calm, Ivey said FDLE could present its findings to the State Attorney's Office for review within 90 days.

"I ask that you keep the family of the two young men in your thoughts and prayers and also our Deputies, as an incident of this magnitude impacts everyone, including our entire community," Ivey said in his statement.

'There is a public outcry'

In a statement Wednesday, the State Attorney's Office expressed its "sincere condolences to the family and friends of these two young men as they struggle to deal with this painful tragedy. We understand and share their desire to know what took place, and that every aspect of this incident will be carefully reviewed."

The state attorney will "determine whether a criminal violation of Florida law has occurred, whether any person may be held criminally responsible, and whether such criminal responsibility can be proven beyond a reasonable doubt in a court of law," according to the statement.

Alex Goins, the deputy mayor of Cocoa, said before the video's release that people in the community were demanding answers about the shooting.

"There is public outcry," he said. "It's unfortunate. These are kids. And I know that they're going to try to paint a picture of a bad past but these kids are (teenagers). What kind of past can they really have?"

Cynthia Green, a relative of one of the teens who was killed, told CNN affiliate WESH that his friends had picked him up at home and, as their car turned the corner, sheriff's deputies pulled up and demanded they get out of the car.

"'Get out the f--- car,'" Green told the station that the deputies' demanded. "I said, 'No, don't shoot them. Please don't shoot them. My baby is in that car. He just got in here.' He hadn't been in there but two minutes. Not even a good hot minute."

At the end of the dashcam video, a woman's cries can be heard.