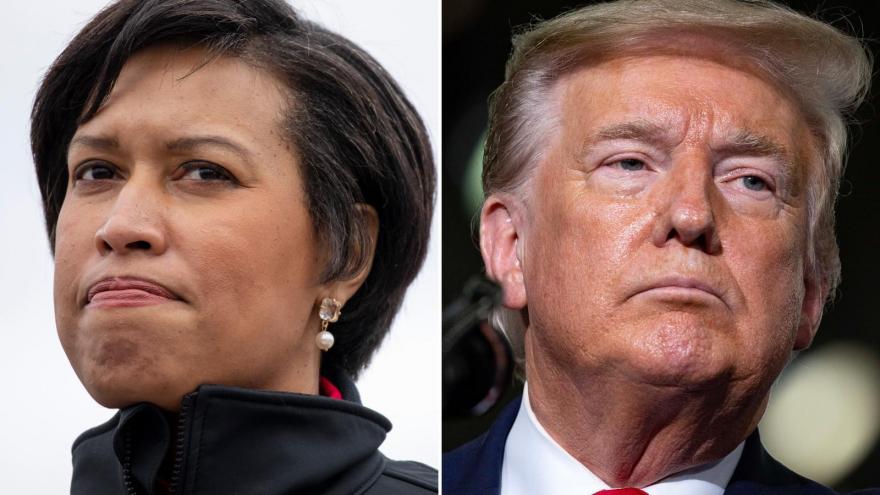 (CNN) -- Washington, DC, Mayor Muriel Bowser requested Friday that President Donald Trump remove all additional federal law enforcement and military presence from the city, arguing that the units are "inflaming" and "adding to the grievances" of people protesting over the death of George Floyd.

"The protestors have been peaceful, and last night, the Metropolitan Police Department did not make a single arrest. Therefore, I am requesting that you withdraw all extraordinary law enforcement and military presence from Washington, DC," Bowser wrote in a letter to the President, adding that she has ended the state of emergency in DC related to the protests.

Trump has touted a law-and-order message and threatened to send in military troops to quell protests in other states, but most governors have been opposed. DC's status as a district, not a state, allows the President, and in turn the federal government, more leeway. Combined, at least 5,800 troops, agents, and officers have taken to the streets of the District.

Among them are personnel from the national guard, US Secret Service, US Park Police, Federal Bureau of Investigation, Bureau of Alcohol, Tobacco, Firearms and Explosives, Drug Enforcement Administration, US Marshals Service, Bureau of Prisons, Customs and Border Protection, Immigration and Customs Enforcement, the Federal Protective Service and the Transportation Security Administration.

In her letter, the Democratic mayor expressed concern that "unidentified federal personnel patrolling the streets of Washington, DC post both safety and national security risks."

She argued that federal law enforcement personnel are "inflaming" protesters and "adding to the grievances of those who, by and large, are peacefully protesting" for reforms.

Bowser accused the "additional, unidentified units" of operating "outside of established chains of command" and adding to the confusion by lacking "identifying insignia."

"This multiplicity of forces can breed dangerous confusion, such as when helicopters are used in a war-like tactic to frighten and disperse peaceful protesters," Bowser said, referring to a UH-72 Lakota helicopter that was seen flying low and hovering over crowds on Monday.

CNN has reached out to the Department of Justice.

Attorney General William Barr said Thursday that DOJ had deployed "all the major law enforcement components of the department on this mission," including officers from the Federal Bureau of Investigation, the Bureau of Alcohol, Tobacco, Firearms and Explosives, the Drug Enforcement Administration, the Bureau of Prisons, and the US Marshal service.

During a Thursday press conference, Bowser made clear that she wants out-of-state military troops out of the nation's capital. The only US military personnel operating in the city are National Guard, and no active duty forces have entered the city yet to respond to civil unrest. Unlike state governors, Bowser, as the mayor of a US city, doesn't have authority over the DC National Guard.

On Monday, the DC National Guard was activated to assist the city's Metropolitan Police Department with the protests.

As of Thursday, more than 4,500 National Guard Members had been deployed to DC -- with troops from 10 states -- at the request of Defense Secretary Mark Esper.

The Utah National Guard has confirmed that its troops are being relocated from local hotels amid reports that Bowser was seeking to evict members of the non-DC National Guards that have arrived in the nation's capital to bolster law enforcement during the ongoing civil unrest.

Two hundred national guardsmen from Utah have deployed to DC in recent days.

"The District of Columbia's National Guard is working diligently to resolve the matter," Thomas said.

Republican Sen. Mike Lee of Utah tweeted earlier Friday that he had "heard that Mayor Bowser is kicking the Utah National Guard out of all DC hotels tomorrow. More than 1200 troops from 10 states are being evicted. This is unacceptable."

"These brave men and women have risked their lives protecting DC for three days. Rioting, looting, arson, and vandalism have all disappeared bc these soldiers served. And now they are being kicked to the curb by an ungrateful mayor. This must be stopped," Lee added.

Bowser responded to Lee in a tweet of her own, saying "Senator — until they are recalled home — which I have formally requested from the President, your troops are in DC hotels. However, DC residents cannot pay their hotel bills. The Army can clear that up with the hotel today, and we are willing to help."

Asked what operational impact such evictions would have, a National Guard official told CNN, "none. We can sleep on the street if needed and still do our job."