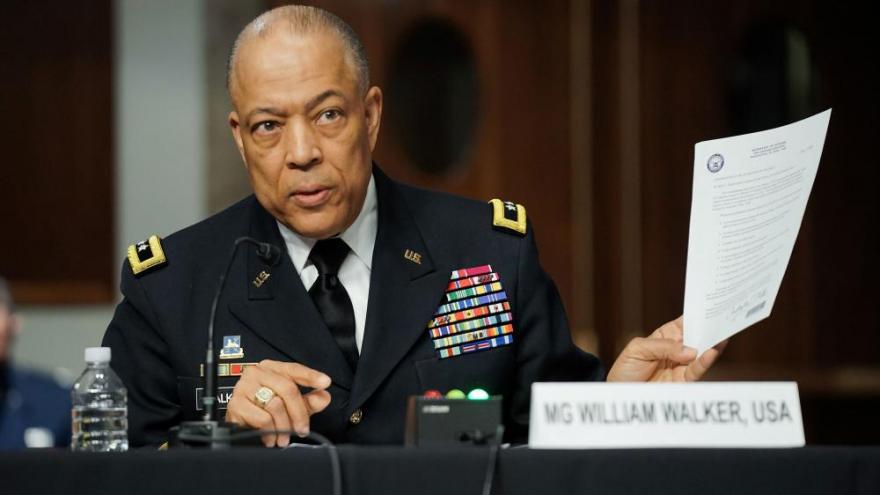 Commanding general of the DC, National Guard, Maj. Gen. William Walker testifies that he did not need authorization before deploying troops in response to protests at the nation's capital in 2020 but that changed for days before the January 6 insurrection.

(CNN) -- The commanding general of the Washington, DC, National Guard testified Wednesday that he did not need authorization from Pentagon leaders before deploying troops in response to protests at the nation's capital last summer but that changed in the days before the January 6 insurrection.

The shift in guidance, according to DC National Guard Commanding Maj. Gen. William Walker, was communicated in a January 5 memo that stated he was required to seek approval from the Secretary of the Army and Defense before preparing troops to respond to a civil disturbance.

"It required me to seek authorization from the Secretary of the Army and the Secretary of Defense to essentially protect my guardsmen," he told senators during a hearing on security failures related to the Capitol building attack.

"So, no civil disturbance equipment could be authorized unless it was came from the Secretary of Defense ... the secretary of defense, told me I needed his permission to escalate to have that kind of protection," Walker added, calling the January 5 memo "unusual."

Asked about the Army's response to former US Capitol Police Chief Steven Sund's request for additional forces, Walker said he was "stunned."

"I was frustrated. I was just as stunned as everybody else on the call," he said.

Walker also testified that it took Army leaders more than three hours to authorize the use of troops to help quell the January 6 insurrection, suggesting the response time fell well short of "sprint speed," as characterized by the top US military official.

Walker told lawmakers that around 1:49 p.m. on January 6 he received a "frantic call from" Sund, whose "voice was cracking with emotion, indicating that there was a dire emergency at the Capitol and he requested the immediate assistance of as many available National Guardsmen that I could muster."

'They had the gear'

Asked how he would have responded to the call if the additional DoD restrictions had not been put in place, Walker said he would have "immediately pulled all the guardsmen that were supporting the Metropolitan Police Department."

"They had the gear and the vehicles." Walker said. "I would have had them assemble in the armory, and then get on buses and go straight to the armory and report to the most ranking Capitol Police officer they saw and take direction, and further."

Walker testified that he could have sent 155 guardsmen to the Capitol shortly after 2 p.m., but could not without approval, adding that he eagerly loaded the guardsmen onto buses to put their gear on and waited.

The timeline of events provided by Walker was similar to the one outlined by Chairman of the Joint Chiefs, Gen. Mark Milley said in an interview with The Washington Post.

But unlike Milley, who said the Pentagon acted quickly to mobilize National Guard troops once it received a request for additional help on January 6, Walker indicated that he felt the authorization process should have taken less time and said roughly 150 troops were ready to be deployed to the Capitol hours before they ultimately were given the green light.

"The approval for Chief Sund's request would eventually come from the Acting Secretary of Defense and be relayed to me by Army Senior Leaders at 5:08 p.m. -- 3 hours and 19 minutes later," Walker said Wednesday in his prepared statement.

"We already had Guardsmen on buses ready to move to the Capitol. Consequently, at 5:20pm (in under 20 minutes) the District of Columbia National Guard arrived at the Capitol," Walker added.

But Walker's timeline conflicted with testimony from Acting Assistant Secretary of Defense for Homeland Security Robert Salesses, who said Wednesday that the full DC National Guard was activated within an hour, highlighting the disagreements -- even between the Defense Department and the National Guard -- over how quickly the Pentagon responded to the riots.

Former Army Secretary Ryan McCarthy directed the DC National Guard to begin full mobilization. Approval from Acting Secretary of Defense Christopher Miller came at 4:32 p.m., Salesses added, and McCarthy then ordered the Guard to leave the Armory and head for the Capitol.

During hearings last week, the former chief of the Capitol Police, as well as the former House and Senate sergeant at arms, all of whom resigned following the riot, accused law enforcement agencies of proving bad intelligence and blamed the Defense Department for not responding fast enough to their requests for help.

But military leaders have maintained there was no delay on their end and that it took time to clarify and organize a response to what they say was a vague yet urgent request for help from city officials and Capitol Police.

"This is the D.C. National Guard that went from a cold start, and they had troops there in two and a half, three hours," Milley told reporters traveling with him on Monday during a visit to Colorado according to the Post. "They reacted faster than our most elite forces from a cold start."

In conversations over the past few weeks, defense officials have reiterated that the National Guard is not a first responder unit capable of sending armed troops into a hostile situation with minimal planning. There is also a sense of frustration and annoyance among some former officials that Capitol Police and others in Washington, DC, expected guardsmen to show up instantaneously.

Pentagon officials repeatedly offered more national guardsmen before January 6 and were turned down, including on the day before the riot. Meanwhile, some Defense Department officials have wondered why the Secret Service and the Park Police didn't sound the alarm earlier in the day of the riot when they witnessed large crowds gathering and making their way toward the Capitol.

Last week, the former Senate sergeant at arms, the former House sergeant at arms, and Sund all said they needed help from the National Guard. But the three, though united in blaming the Pentagon for delaying help, disagreed on when they knew they needed that help and seemed unaware of the process or the chain of command for requesting and activating the National Guard.

Sund said he first flagged the need for more help on January 4, two days before the riot. But former House Sergeant at Arms Paul Irving said he didn't interpret the call from Sund as a request, and that Sund, Irving and former Senate Sergeant at Arms Michael Stenger agreed the intelligence did not support calling up more troops.

The final decision was to mobilize 340 soldiers from the DC National Guard, along with a 40-person quick response force and a chemical-biological hazardous materials team. The guardsmen had the specific task, agreed upon between the Pentagon, Washington officials, and others, to assist with traffic control.