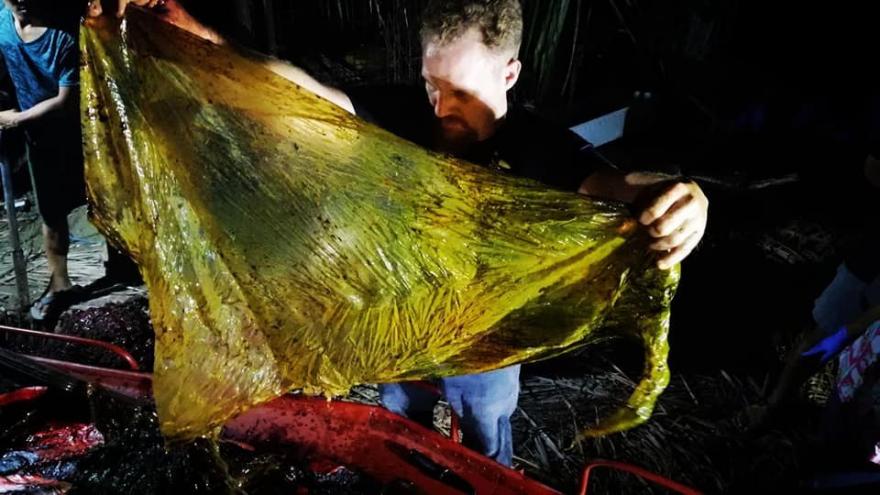 Marine biologist and environmentalist Darrell Blatchley told CNN that the juvenile male Cuvier\'s beaked whale was found \"showing signs of being emaciated and dehydration\" and had been \"vomiting blood before it died.\" Credit: Darrell Blatchley/ D\'Bone Collector Museum Inc.

(CNN) -- A young whale whose carcass washed up in the Philippines died of "dehydration and starvation" after consuming 40 kilograms (88 pounds) of plastic bags, scientists have found.

Marine biologist and environmentalist Darrell Blatchley told CNN that the juvenile male Cuvier's beaked whale was found "showing signs of being emaciated and dehydration" and had been "vomiting blood before it died."

Blatchley, who is president and founder of D' Bone Collector Museum, a natural history museum in the Philippine city of Davao, said his team received notification on Friday that the carcass of the whale had been found in Mabini, Compostela Valley.

The team subsequently took the carcass to its facility and performed a necropsy, which found that it had died from ingesting plastic.

"I was not prepared for the amount of plastic," Blatchley said. "Roughly 40 kilos of rice sacks, grocery bags, banana plantation bags and general plastic bags. Sixteen rice sacks in total."

He noted that there were so many plastic bags in the animal's stomach that some had begun to calcify.

He added that cetaceans -- a family of aquatic mammals that includes whales and dolphins -- don't drink water from the ocean but obtain their water from the food they eat. As the whale was no longer able to consume large amounts of food due to the ingested plastic, it died of "dehydration and starvation," Blatchley said.

The D' Bone Collector Museum said in a statement that this was the most plastic its team had ever seen in the stomach of a whale, and described the discovery as "disgusting."

The museum called on governments to take action against those who "continue to treat waterways and oceans as dumpsters."

Peter Kemple Hardy, a campaigner at World Animal Protection -- an animal welfare charity -- described the incident as a "tragic reminder" of the need to "work together towards global solutions" in order to prevent plastic pollution being left in our oceans.

"Hundreds of thousands of whales, dolphins, seals and turtles are killed by ocean plastic pollution every year, including single-use plastics and abandoned plastic gear from the fishing industry," he told CNN.

Mark Simmonds, senior marine scientist at Humane Society International, told CNN that the latest incident once again highlights the "cruel global crisis that marine debris is presenting to wildlife." He warned that the crisis often remains "out of sight and mind" except when animals such as this are recovered and examined.

"Efforts must be stepped up worldwide to reduce plastics pollution in our oceans or this kind of tragedy may become far more common in the future," he concluded.