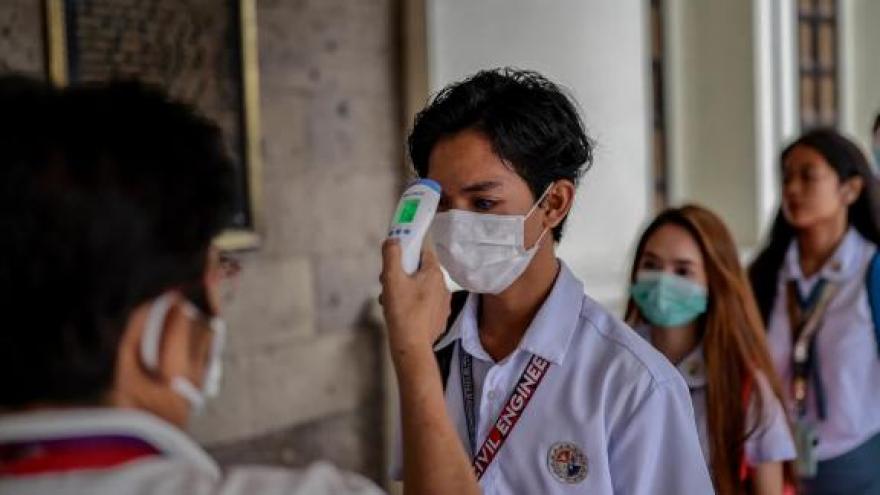 (CNN) -- Mainland China had its deadliest day in the coronavirus outbreak Friday, with authorities reporting 86 fatalities from the pneumonia-like illness that is paralyzing much of the country.

A total of 722 people had died from the virus and 34,546 were infected in mainland China by the end of Friday, China's National Health Commission said. The majority of new cases were recorded in Hubei province and its capital, Wuhan, the epicenter of the outbreak. Authorities finished construction on a new hospital in Wuhan last week, and another is due to open in the coming days to treat the growing number of patients.

Meanwhile, it emerged that a 60-year-old United States citizen had died from the virus at Jinyintian Hospital, in Wuhan, on February 6, according to the US Embassy in Beijing, marking the first confirmed death of a foreigner from the virus. Japan also reported its first death of suspected coronavirus in Wuhan on Saturday, according to an announcement from the Ministry of Foreign Affairs. The Japanese man in his 60s died of pneumonia. The hospital that treated him was inconclusive on the cause of the pneumonia.

Globally, the virus has now infected more than 320 people in another 27 countries and territories, and killed a Chinese man in the Philippines and a 39-year-old male in Hong Kong. New cases were confirmed in Malaysia, Taiwan and Japan on Saturday.

To stop the virus from spreading further, Beijing has taken the unprecedented step of trying to quarantine entire cities in Hubei. About 60 million people are under various travel restrictions, as roads are blocked, train stations closed and flights canceled.

The Chinese government has issued new regulations to severely punish people who disrupt the epidemic control work. Those who violate the rules will be subject to speedy arrests and sentences, and even the death penalty.

Researchers are working around the clock to understand the coronavirus, how infectious it is and how exactly it is transmitted. Fears over the epidemic have prompted people around the world to stock up on face masks, which has led to a worldwide shortage of supplies essential to medics.

Governments worldwide appear to be exercising an abundance of caution in stemming the spread of the virus, issuing various levels of travel warnings for travel to China and increasing screenings of arrivals from the country. Several major airlines have canceled or scaled back flights to and from mainland China.

Thousands of people are trapped on three cruise liners in Asia due to fears surrounding coronavirus among their passengers.

A ship in Japan, the Diamond Princess, and another in Hong Kong, the World Dream, have both been quarantined after it emerged they had hosted infected passengers.

A third ship, the Westerdam, has been turned away from various ports due to fears that there may be coronavirus cases on board. There is no suggestion that any passengers, current or former, have been infected.

Sixty-four passengers from the Diamond Princess have tested positive for the virus and been taken ashore for isolation and treatment, Japanese authorities said. About 2,600 guests and more than 1,000  crew are on board, including hundreds of Americans. They will likely stay in quarantine until February 19.

The patient thought to have brought the virus on board is an 80-year-old man from Hong Kong. He boarded the cruise in Yokohama on January 20, and when it made its scheduled stop in Hong Kong on January 25, he got off and never returned. He sought medical attention on January 30 and was diagnosed with the virus shortly after. Hong Kong authorities said he was in stable condition Wednesday.

Before arriving in Hong Kong, the World Dream had docked at several ports across China and Vietnam. On January 24, after visiting those locations, more than 4,400 passengers disembarked mostly to return to mainland China. Not long after, eight of those former passengers were confirmed to be infected with the coronavirus, potentially leaving the ship contaminated.

The ship docked in the semiautonomous Chinese city Wednesday with 3,600 people on board and has since been sitting at the Kai Tak Cruise Terminal in Victoria Harbour. The only people allowed off have been three crew members, who were evacuated from the ship for treatment in hospital.

A doctor is mourned

Many in China are still mourning the death of Li Wenliang, who was one of the first people to sound the alarm over the coronavirus.

Li, a 34-year-old ophthalmologist from Wuhan, was widely hailed as a hero after it emerged he was targeted by police for spreading "rumors" about the virus, when he was, in fact, trying to raise the alarm.

After contracting the virus, Li's condition worsened in the early hours of Friday morning and he died. The outpouring of grief and anger on Chinese social media platforms was immediate -- and almost unprecedented. The anguish was made worse by initial confusion as state media first published then retracted reports of his death, leading to allegations they were trying to cover it up or control the story.

"I knew you would post this in the middle of the night," read one popular post on Weibo, one of China's largest social media platforms. "You think we've all gone to sleep? No. We haven't."

The topics "Wuhan government owes Dr. Li Wenliang an apology," and "We want freedom of speech," soon began to trend on China's Twitter-like platform, Weibo. Each gained tens of thousands of views before disappearing from the heavily censored platform.

As the grief and rage poured out, those in charge of China's vast censorship apparatus, the Great Firewall, seemed at a loss over what to do. Topics relating to censorship itself, usually absolutely verboten, trended for several hours before being deleted, rare evidence of indecision and confusion.

On Friday, China's National Supervisory Commission, the country's top anti-corruption agency, announced in a statement that it would send a team to Wuhan to investigate Li's death, "in response to issues raised by the masses."

The short statement did not elaborate on the nature of the "issues" raised.