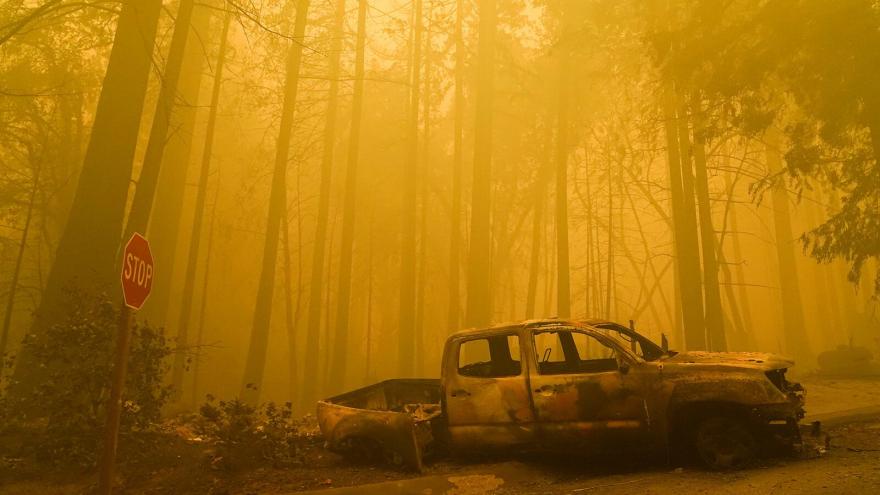 A burned out vehicle is left in front of a fire- ravaged residence as smoke fills the sky on Saturday, August 22, in Boulder Creek, California.

(CNN) -- The deadly California wildfires have burned over 1 million acres -- and there's no end in sight as thousands of firefighters struggle to contain the blazes and more emerge.

Hundreds of fires were started by lightning, Cal Fire spokesman Steve Kaufmann said. There were approximately 12,000 lightning strikes that started 585 fires in the state over the past week. A total of 1.1 million have burned in the state with more than 13,000 firefighters working the fires, he said.

Firefighters have been struggling to contain the massive blazes that have killed at least four people. Two fires -- the 347,630 -acre LNU Lightning Complex Fire in the northern Bay Area and Central Valley, and the 343,965 acre-acre SCU Lightning Complex Fire largely east of San Jose -- are among the state's three largest wildfires in recorded history.

California Gov. Gavin Newsom announced Saturday the state has received a Presidential Major Disaster Declaration due to the fires burning in the Northern part of the state. This means President Donald Trump released federal aid to supplement recovery efforts in areas affected by the wildfires.

Those areas include Lake, Napa, San Mateo, Santa Cruz, Solano, Sonoma, and Yolo counties, according to a White House statement. The SCU fire is now the 2nd biggest fire in state history while the LNU is the third.

Some firefighters are working 24-hour shifts

Though more than 13,000 firefighters are battling the flames -- some on 24-hour shifts -- there are too many fires and not enough resources to prevent more homes from being torched, Cal Fire officials have said.

One of the reasons for a resource shortage: Fewer prison inmates than usual are helping, because of early releases during the Covid-19 pandemic.

Firefighters are worried about forecasts that say dry thunderstorms -- featuring lightning but little rain -- could spark more fires and spread existing ones Sunday through Tuesday.

"Right now, both of these fires are sitting at number two and number three as the largest incident in the state. To have both of those going off at the same time is saying something ... it gives us the magnitude of what has happened here in the last week here in the state."

Kavanaugh said that 96% of Cal Fire's engines were engaged in fighting fires, with additional resources coming in from outside agencies, including fire engines from Washington state and Oregon.

But he said resources would be redirected for new fires: "If we do get a new start, we have to pull resources. That is very difficult to do but we do have to do it. We have to make sure we do not get new starts up and running on us."

"Tonight, or today, a weather red flag warning was issued which encompasses pretty much the entire northern half of the state of California and central coastal areas for lightning and erratic winds," she said. "So, what I'm asking from all of you is -- with the weather predicted, the red flag warning issued -- I can't stress enough the importance of being prepared to leave."

Fires cause more death and destruction than all 2019

California wildfires have caused more deaths and destruction so far this year than in all of 2019. Last year, wildfires charred a total of 260,000 acres and killed three people, according to Cal Fire.

And as tens of thousands of people heed evacuation orders, they're weighing the risk of coronavirus infections as they decide whether to head to official shelters.

On top of that, about 8 million people in parts of California, southern Oregon, Montana and southern Utah were under red flag warnings. This means "warm temperatures, very low humidities, and stronger winds are expected to combine to produce an increased risk of fire danger," according to the National Weather Service.