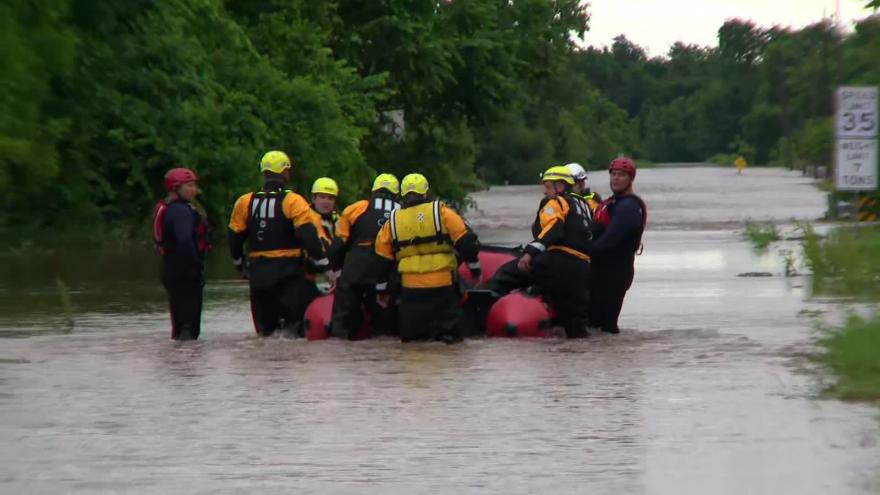 A deadly spring storm unleashed drenching rain, flash flooding and hail in the central United States -- along with more than 130 reports of tornadoes in five days. Source: CNN
By Faith Karimi, CNN

(CNN) -- A deadly spring storm unleashed drenching rain, flash flooding and hail in the central United States -- along with more than 130 reports of tornadoes in five days.

At least one person drowned in Oklahoma after driving around a barricade on a road in Perkins, the city's Emergency Management office announced.

A majority of tornadoes were in Kansas and Missouri, CNN meteorologist Taylor Ward said. Of the total number, Friday had the most tornadoes reported at 39 and Tuesday was a close second at 32.

The extreme weather is not just limited to tornadoes.

Parts of Oklahoma, Kansas and Missouri had more than three inches of rain in the past 24 hours, and are still under flood warnings, the National Weather Service said Tuesday night.

And severe thunderstorms, large hail and some tornadoes are expected from Missouri and western Illinois, to parts of Arkansas, Louisiana and Texas. In some parts of Illinois, the main threats will be heavy downpours, lightning and wind gusts of up to 35 mph, the National Weather Service said.

But not in Chicago, where forecasters had more upbeat news.

In Oklahoma, the extreme weather was still a concern Wednesday, with the National Weather Service saying it'll continue to monitor the area due to a risk of severe thunderstorms across central Oklahoma into western north Texas.

After the drenching rain, rescuers such as the Broken Arrow Fire Department posted harrowing videos of people being pulled out of gushing flood waters and warned people to avoid flooded roads.

Firefighters responded to a car swept off the roadway Tuesday and found a man clinging to a fence post, unable to get out of the water, CNN affiliate KOKI reported.

The rescue team deployed a life safety rope and got in the water to climb to the victim. They gave him a flotation device and pulled him to safety.

Storms have repeatedly hit the same areas recently, making the Plains and the Midwest more vulnerable to flooding.

Serious river flooding -- including along the already swollen Mississippi River -- is expected in the central US as more rain falls over the region in the next few days.