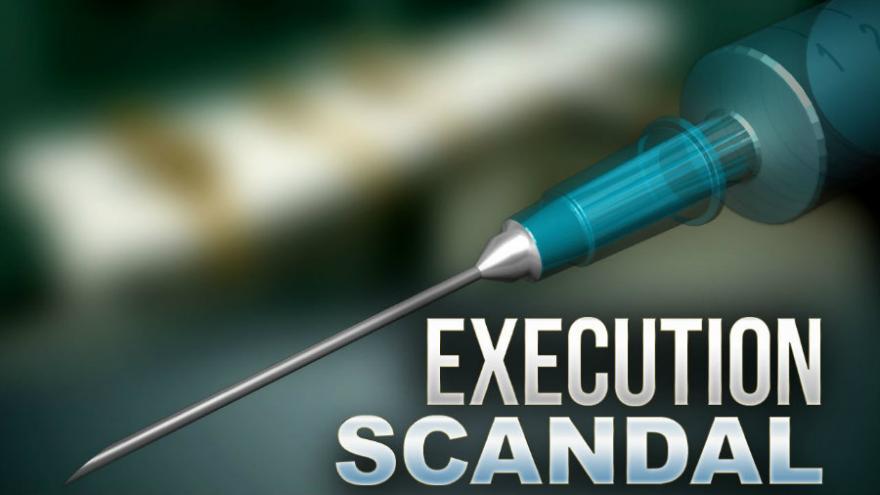 (CNN) -- An Alabama death row inmate whose execution went wrong is asking that his death sentence be vacated. The attempted execution was "botched and bloody," as the inmate's lawyer put it, and left the inmate under "physical and mental duress."

Doyle Lee Hamm was convicted in 1987 of committing murder during a robbery and sentenced to death. On February 22, the 61-year-old was being prepped for intravenous lethal execution at the Holman Correctional Facility when staff and medical personnel tried and failed for 2½ hours to find veins in his groin, feet and legs.

A federal judge ordered a medical exam by an outside physician; it was completed Sunday by Dr. Mark Heath, an anesthesiologist who practices at NewYork-Presbyterian/Columbia University Medical Center.

In two civil actions filed Wednesday with the Alabama US District Court and the state circuit court, Hamm maintains that the execution was called off after "hours of physical and psychological torture, forcing needles into his lower extremities" and the right femoral vein near his groin, "causing severe bleeding and pain."

Hamm's defense team is asking for relief from his "now unconstitutional sentence of death." They claim that the painful procedure, during which their client wished he could die, was cruel and unusual punishment and a "constitutionally prohibited cruel, unnecessarily painful, slow, and lingering process to death." They also claim that attempting a second execution would be double jeopardy, protected by the Fifth Amendment, which states that no person shall "be subject for the same offense to be twice put in jeopardy of life or limb."

Hamm's court filings state that the execution team made numerous attempts to gain access to veins in his legs and ankles. In at least two attempts, the documents state, "an execution team member inserted a needle into Doyle Hamm's leg and kept the needle in his leg for several minutes, moving it around in a painful and futile attempt to enter Doyle Hamm's veins."

When entry via leg veins failed, the documents say, personnel tried and failed to get a needle or catheter into his right femoral artery.

"Multiple times, the execution team tried to insert a needle or catheter into Doyle Hamm's right groin, causing severe bleeding and pain," the filings state. "The staff put a pad on his groin to absorb the blood and had to change the pad during the procedure when the pad became completely soaked with blood."

Pictures attached to the filings show puncture wounds and intense bruising in his feet, legs and groin.

Heath also documented a "large" hematoma, or swollen blood clot, that "could possibly be caused by an unusually large leak from the femoral vein." He stated that the pain Hamm is having in his lower abdomen "may be related to bladder or other visceral injury."

The entire process to place an IV, the filings state, took at least 2½ hours. In a blog post March 4, Hamm's attorney, Bernard Harcourt, wrote that "This was clearly a botched execution that can only be accurately described as torture."

"To say this was a botched execution is an understatement," Dunham said. "When you see the pictures of the groin, you don't see bruising like that in a properly set line. This man was strapped to a gurney for 2½ hours, and during that period, they literally poked holes in him."

After the execution was aborted, Alabama correction officials denied that there was any problem with the procedure and said they halted it when they ran out of time before the midnight execution deadline.

"I wouldn't necessarily characterize what we had tonight as a problem," Alabama Department of Corrections Commissioner Jeff Dunn said shortly after the execution was stopped. "The only indication I have is that in their medical judgment it was more of a time issue, given the late hour."

Dunham disagrees. He cites the fact that Alabama keeps its execution protocols secret as an issue in the resolution of the case.

"They don't allow witness to observe critical points of the process," he said. "This is an illustration of why secrecy is such bad public policy. "

Hamm's defense team states in the court filings that the inmate is struggling with "active lymphatic cancer" that has created abnormal lymph nodes, including in his groin. The abnormal lymph nodes had "previously been identified by this Court's independent medical expert" as problematic.

Because of this finding, Hamm's attorney had argued for months that killing his client by lethal injection would amount to "cruel and unusual punishment" because Hamm's veins had become severely compromised by both the cancer and "years of intravenous drug use," the filings state.

Instead, Harcourt says, he and his client had asked for death by "oral lethal injection," which he says the court denied. In earlier court filings, Alabama Attorney General Steve Marshall's office argued that Hamm had waited too long to challenge Alabama's method of execution and had failed to present proof that his medical condition had deteriorated.

Alabama carries out executions by lethal injections unless an inmate requests the electric chair.