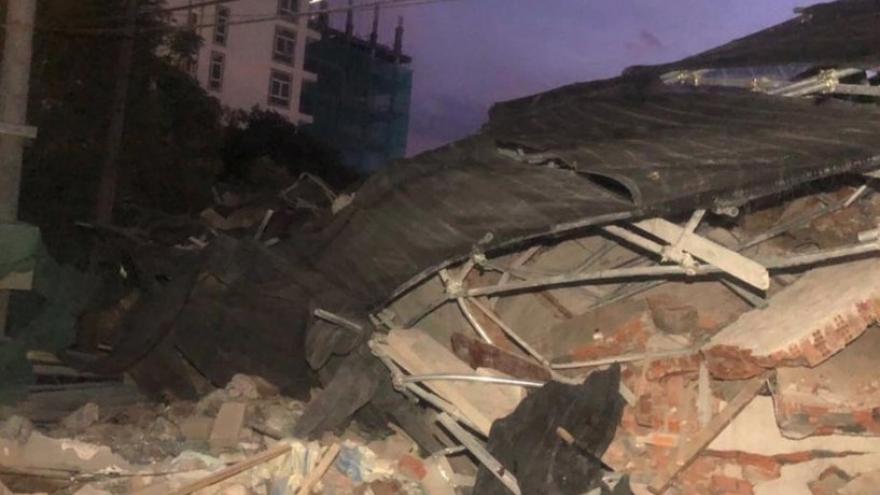 SIHANOUKVILLE, Cambodia (AP) — Rescuers on Monday found two survivors in the rubble of a building two days after it collapsed while under construction in a Cambodian beach town, killing at least 28 workers and injuring 26 others as they slept in the unfinished condominium that was doubling as their housing.

A hospital official said the two were very weak and could only speak in a soft voice.

"They are in serious condition after being trapped since early Saturday without any food or water," he said on condition of anonymity because he was not authorized to speak to the media.

The seven-story building collapsed on top of dozens of construction workers who were sleeping on the second floor. The condominium was being built in the thriving seaside resort town of Sihanoukville, which has several such Chinese-funded projects.

The Chinese Embassy expressed its condolences and said it was mobilizing Chinese assistance for the rescue.

Preah Sihanouk provincial authorities said rescuers digging through the twisted metal and concrete rubble found two survivors and four bodies on Monday, raising the death toll to 28. More than 80% of the debris had been removed from the site as of Monday morning.

Hun Sen said on his Facebook page that he requested the resignation of the provincial governor, Yun Min, and that he had agreed.

Hun Sen also announced that he was establishing a special committee to oversee the quality of Chinese building projects in the town.

At least 26 workers were injured in the collapse. One of them, Nhor Chandeun, said he and his wife were sleeping when they heard a loud noise and felt the building vibrate and then begin falling down. They were trapped for 12 hours before rescuers found them.

The Ministry of Labor and Vocational Training said 30 workers were at the site when the building collapsed, but Nhor Chandeun said there were 55 to 60 people inside the building.

Provincial authorities said in a statement that four Chinese nationals involved in the construction have been detained while the collapse is investigated.

The Chinese Embassy "supports a thorough investigation of the accident and necessary measures by competent Cambodian authority in accordance with the law," the embassy said in a statement Monday.

It said the embassy was greatly saddened by the collapse and had reached out to Chinese enterprises in Cambodia to mobilize personnel as well as heavy equipment like excavators to clear the rubble.