Death toll in Iraq protests climbs to 63 since Friday 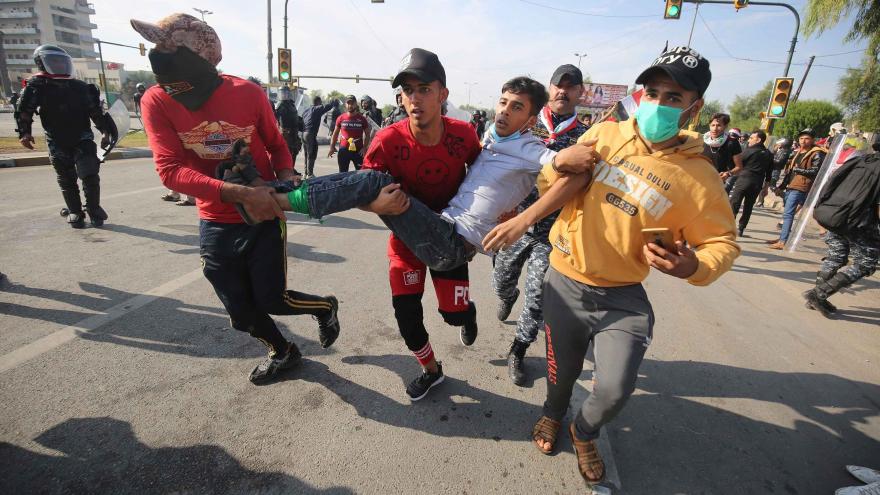 (CNN) -- At least 63 people have died as protests intensify in Iraq, with security forces using tear gas and live bullets to repel demonstrators Saturday, a member of the Independent High Commission for Human Rights of Iraq told CNN.

Ali Akram al-Bayati said three people were shot dead in Al Nasiriya, and another three people died from injuries in Baghdad after they were hit in the head by tear gas canisters fired by security forces.

More than 2,592 people have been injured since protests flared again Friday, over unemployment, government corruption, and a lack of basic services.

Saturday's violence comes a day after 12 people were killed at the Badr political party office in the southern Iraqi city of Diwaniya after it was set ablaze. Iraqi security forces said they were investigating the fire.

Kareem al-Nouri, a member of the Badr political party in Baghdad, confirmed to CNN that the attack had taken place and that no Badr staffers were among the dead.

Iraq's Joint Operations Command said in a statement released Friday that security forces will deal with criminal saboteurs firmly according to "anti-terrorism law."

"While the country is witnessing demonstrations to demand rights guaranteed by the Iraqi constitution, some have exploited these demonstrations by killing citizens and injuring others, burned and looted public and private property without any conscience," the statement added.

Earlier on Friday, hundreds of protesters gathered in Tahrir Square, in central Baghdad, for anti-government protests. Some attempted to enter the Green Zone by removing concrete walls placed by security forces on the bridge leading into the fortified area where the Iraqi Parliament and several Western embassies are situated, including the US embassy.

The Green Zone, an area carved out of central Baghdad by U.S.-led forces after their invasion of Iraq in 2003, is seen by many Iraqis as a virtual city within a city where privileged residents enjoy more security and better public services than elsewhere in Baghdad.

In a televised speech Friday, Iraq's Prime Minister Adel Abdul Mahdi said a ministerial reshuffle would take place next week, focusing on "competencies and independence of ministers and increasing presence of women and youth."

''We will reduce the salaries of the three presidencies (President, Prime Minister and speaker of Parliament), lawmakers, special degrees, and directors to half salary," he continued.

''The resignation of the government today without providing a constitutional alternative would lead the country to chaos.''

Mahdi authorized all governors to impose a partial or full curfew on their provinces on Friday, according to state-run Al Iraqiya TV.

Earlier this month Iraqi government forces killed more than 100 protesters and wounded more than 5,000 people during a six-day period of protests.

Iraqi President Barham Salih in an October 7 televised speech condemned using lethal force against protesters in Baghdad and ordered the opening of a "a judicial investigation" into the deaths.

"Targeting peaceful demonstrators and security forces by live bullets, and targeting the media and journalists is unacceptable in Iraq that we have embraced and pledged to make it a democracy in which the rights and freedoms are respected," Salih said.