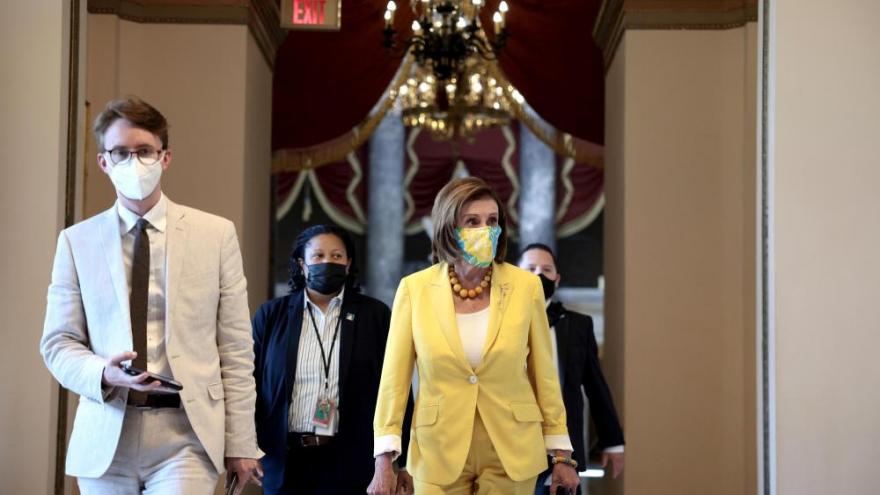 House Democrats could vote on the debt ceiling as soon as Tuesday. House Speaker Nancy Pelosi is seen here at the U.S. Capitol on August 24, in Washington, DC.

(CNN) -- Congress is barreling toward a mid-October deadline to raise the national debt limit, but Democrats and Republicans are locked in a stalemate over the issue with no clear resolution and the clock ticking down.

Democrats want Republicans to join with them in a bipartisan vote to suspend the debt limit, but Republicans insist they won't do that and have called for Democrats to act on their own to address the issue. With control of both chambers of Congress and the White House, Democrats face intensifying pressure to go it alone, but have so far not committed to that course of action and are still attempting to force Republicans to vote on the issue, even if those votes are destined to fail.

House Speaker Nancy Pelosi told Democrats that a vote on raising the debt ceiling could come as soon as Tuesday, a source in the Democratic caucus meeting told CNN. Pelosi signaled during the same meeting that Democrats are going to decouple the stopgap funding bill known as a continuing resolution to fund the government from the provision to raise the debt ceiling, according to a source in the meeting.

This move could avoid a government shutdown because Republicans have said they will not vote for the stopgap bill if it includes the debt ceiling provision. Government funding is scheduled to run out at midnight ET on Thursday night. It is not likely to resolve the debt limit issue, however.

Pelosi told reporters after the meeting that "it's among our plans" for Democrats to move a clean debt ceiling bill Tuesday.

"We have a number of things -- lift the debt ceiling, keep government open, we have to do those imminently," she said.

Meanwhile, Senate Majority Leader Chuck Schumer made a unanimous consent request on Tuesday to set up vote to suspend the debt limit with a simple majority threshold, but it was blocked by Republicans who said they don't want to make it easier for Democrats to pass the politically sensitive measure.

"We have given the Republicans what they want," Schumer said, referring to how Republicans have called on Democrats to act on their own on the issue. "We're just asking Republicans, get out of the way."

Senate Minority Leader Mitch McConnell objected to the request, however.

"There is no chance the Republican conference will go out of our way to help Democrats conserve their time and energy so they can resume ramming through partisan socialism as fast as possible," he said.

Treasury Secretary Janet Yellen has warned lawmakers that the federal government will likely run out of cash and extraordinary measures by October 18 unless Congress raises the debt ceiling, a new estimate that underscores how the United States could default on its debt in a matter of weeks if Washington fails to act. A default would likely be catastrophic, tanking markets and the economy, and delaying payments to millions of Americans.

Congressional Democrats initially attempted to pass legislation addressing both fiscal issues -- the debt limit and government funding -- at the same time. The bill passed out of the House last week, but Senate Republicans on Monday blocked the measure.

House Majority Leader Steny Hoyer acknowledged on Tuesday that the use of reconciliation -- a process that could allow Democrats to lift the debt ceiling without GOP votes -- is an option on the table, but also said that Democrats can try passing a clean bill to address the debt limit.

"It is not an alternative not to back the full faith and credit of the United States so we may have to use reconciliation. I think that would be a sad statement of Republican irresponsibility," Hoyer, a Democrat from Maryland, said. "Reconciliation is one option and that's on the table. There are other options on the table also and that's passing back to them a clean bill that they can move relatively quickly on the hope that perhaps hopefully some Republicans, at least 10 Republicans, decide the full faith and credit of the United States of America is more important than getting a political advantage."

By acknowledging that reconciliation could be used as an option for addressing the debt limit, Hoyer went further than many top Democrats have in recent days. The remarks were also at odds with some comments from other lawmakers in his party.

In a clarification of his earlier remarks, Hoyer later tweeted that reconciliation is "not the best option, nor the option we're pursuing" to address the debt limit.

House Democratic Caucus Chairman Hakeem Jeffries said Democrats are still weighing the options for how they will raise the debt ceiling if it does in fact get separated from the continuing resolution to fund the government.

"I think we had a discussion, as the speaker may have indicated, that was pretty extensive about a few different options that are in front of us in terms of the debt limit. We are not going to default on the full faith and credit of the United States of America. That's an iron-clad guarantee" Jeffries, a Democrat from New York, said.