December is the deadliest month in the US since the coronavirus pandemic began -- and projections for January are 'nightmarish,' expert says 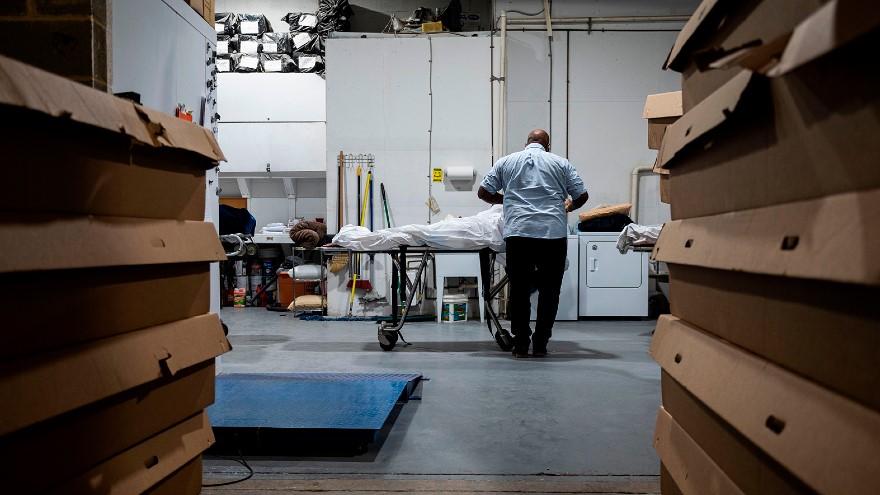 (CNN) -- December has been the nation's deadliest month since the Covid-19 pandemic's start -- with more than 63,000 Americans lost to the virus in the past 26 days.

In comparison, the entire month of November saw about 36,964 deaths.

The authorization of two Covid-19 vaccines earlier in December offered some hope of a light at the end of the tunnel. But experts continue to warn that while the end is in sight, the pandemic is not over and another surge stemming from the Christmas holiday could be on its way.

"We very well might see a post-seasonal -- in the sense of Christmas, New Years -- surge," Dr. Anthony Fauci said on CNN's "State of the Union" Sunday morning, pointing to holiday travel and private gatherings taking place despite the advice of health experts.

The nation's top infectious disease expert described the potential rise in cases as a "surge upon a surge," telling CNN's Dana Bash, "If you look at the slope, the incline of cases that we've experienced as we've gone into the late fall and soon to be early winter, it is really quite troubling."

More than 1.1 million people were screened at airports on Saturday, according to the TSA, marking the third busiest day for US air travel since March. More than 616,000 were screened on Christmas Day alone, and hundreds of thousands more traveled in the days leading up to the holiday.

Covid-19 hospitalization numbers across the US are already at record levels. On Sunday, the country recorded its fourth-highest number of hospitalizations with more than 118,720 Covid-19 patients nationwide, according to the Covid Tracking Project.

This is the twenty-sixth consecutive day that the US has remained above 100,000 current hospitalizations.

All of the five highest days for hospitalizations have been in the last week.

Another surge of cases and hospitalizations will, inevitably, mean more deaths -- on top of an already devastating death toll.

"As we get into the next few weeks," he added, "it might actually get worse."

Fauci's comments Sunday came as the US surpassed 19 million coronavirus cases, yet another milestone for the pandemic, coming just over 11 months after the first case was recorded in the US in late January.

Nearly 332,000 Americans have died of Covid-19. Another 193,000 could lose their lives over the next two months, according to predictions from the University of Washington's Institute for Health Metrics and Evaluation.

"The projections are just nightmarish," said Dr. Peter Hotez, an infectious disease specialist at the Baylor College of Medicine. "People can still save the lives of their loved ones by practicing that social distancing and masks. And remember, vaccines are around the corner."

Nearly 2 million Covid-19 vaccine doses have been administered in the US, according to the Centers for Disease Control and Prevention, and more than 9.5 million doses have been distributed.

Those numbers now include both the Pfizer/BioNTech and Moderna Covid-19 vaccines. And while there are lags in data reporting, federal officials had previously said they would vaccinate 20 million people by the end of the year.

"I'm pretty confident that as we gain more and more momentum, as we transition from December to January and then February to March, I believe we will catch up with the projection," he said.

"At every step, there's complexity and there's possibility for delay, whether it's individual state planning, allocation, training, supply of vaccine, storage... there (are) just so many factors at this stage," Choo said.

"We need to be prepared for the fact that it is going to be a slow rollout in many places and that it will not change our behaviors or necessarily the trajectory of the pandemic in this country in the short term," Choo said.

Choo's words echo a number of other experts who have warned the American public not to let their guard down as vaccinations begin and to continue following public health measures including wearing masks, social distancing, avoiding crowds and gatherings, and regularly washing their hands.

It likely won't be until summer that vaccines are widely available and begin to make a meaningful impact on the pandemic's course, officials have said. Fauci estimates about 70% to 85% of the population needs to get vaccinated against Covid-19 for the country to achieve herd immunity.

The CDC also announced last week new testing requirements for travelers arriving from the UK, which will go into effect Monday.

Passengers must have had a negative PCR or antigen test within 72 hours of boarding a flight from the UK to the US, along with documentation of their laboratory results. Airlines will be required to confirm the test prior to the flight.

This comes after the emergence of a new Covid-19 variant first detected in the UK, which health officials say "has been predicted to potentially be more rapidly transmissible." Since the discovery of the variant, more than 40 countries have restricted travel from the UK and in some cases, travel from other countries that have documented cases with the variant.

The third case of the variant first identified in the UK has been detected in Ottawa, Canada, a press release from the Ontario government said Sunday.

The case is a person who recently traveled from the UK, according to the release. That individual is now in self-isolation.

The two previous cases that were reported on Saturday have since been found to have had contact with a recent traveler from the UK, the release said.

One expert says the new testing requirements for travelers into the US have not been implemented quickly enough to be effective against a reported variant.

"It makes sense that for any place that's experiencing a regional spike in cases that we put new measures in place," emergency medicine physician Dr. Richina Bicette told CNN. "But if they're trying to make sure that the virus isn't imported to the United States, these measures are going to have no effect on that whatsoever."