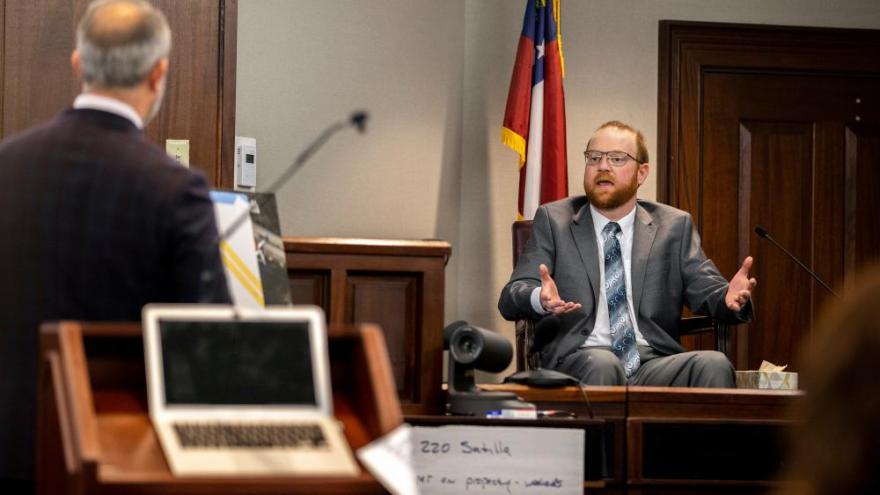 Travis McMichael speaks from the witness stand during his trial Wednesday in Brunswick, Georgia.

(CNN) -- Defendant Travis McMichael is expected to testify again under cross-examination Thursday regarding the 2020 shooting and killing of Ahmaud Arbery.

McMichael, one of three defendants charged in the killing, was questioned by defense and prosecution attorneys Wednesday and testified that he acted in self-defense as he and Arbery wrestled over McMichael's shotgun.

Travis McMichael, his father Gregory McMichael and their neighbor William "Roddie" Bryan Jr., all of whom are White, face charges including malice and felony murder in the death of Arbery, a 25-year-old Black man who was chased by the trio on February 23, 2020, in a neighborhood near Brunswick, Georgia.

The younger McMichael shot and killed Arbery and it was captured on cell phone video by Bryan. All three defendants have pleaded not guilty.

Charges were not filed against the three men for months until the cell phone footage of the shooting was made public, spurring national outrage and protests. The first two prosecutors handling the case recused themselves due to conflicts of interest, citing Gregory McMichael's position as a former investigator.

Arbery's family has said he was out for a jog when he was shot and killed. Defense attorneys contend the McMichaels, suspecting him of burglary, were trying to conduct a lawful citizen's arrest, and that Bryan, after seeing the McMichaels chase Arbery, attempted to cut Arbery off, followed and recorded video of the pursuit and shooting.

In addition to malice murder and felony murder, the defendants also face charges of aggravated assault, false imprisonment and criminal attempt to commit a felony. All have pleaded not guilty. If convicted, each man could face life in prison without the possibility of parole.

On Wednesday, Travis McMichael testified that on the evening of February 11, 2020 -- nearly two weeks before Arbery's shooting -- he saw someone "creeping through the shadows" in the neighborhood.

He testified the person, whom he later described to police as a Black male, pulled up his shirt and went for his "pocket, waistband area." Travis McMichael said he assumed the person was armed, so he fled in his vehicle as the person ran to a nearby home under construction.

McMichael testified he told his father what happened, and the two went back to the unfinished home and called authorities. Police never saw or talked to the person Travis McMichael said he saw that night, he testified.

Travis McMichael then testified that he was sitting in his home on the day of the shooting when his father ran inside in a "frantic state" and told his son to get his gun, saying the man from days earlier had "just ran by the house" and "something's happened."

"I was under the assumption that it was the same individual that I saw (at the unfinished home) on the 11th," and he had heard previously that things had been stolen from the site, Travis McMichael testified.

'Life or death situation,' according to Travis McMichael

As Travis and Gregory McMichael drove and encountered Arbery on February 23, they "identified that yes, this is him," Travis McMichael testified.

"(We decided) let's try to hold him for the police to talk to him," Travis McMichael testified. He said he his father told him he had called police, and so assumed police were on their way.

He testified he tried to ask Arbery while still in his truck what was going on, "trying to deescalate" the situation. He said Arbery did not respond and kept running. He testified he tried talking to Arbery a second time, during which Arbery stopped, did not say anything, but took off again after Travis McMichael said police were coming.

Eventually, Travis McMichael said he noticed another truck in the neighborhood. Prosecutors contend Bryan, the third defendant, got in his own truck and joined the pursuit, though he did not know what was going on, and struck Arbery with his vehicle. Arbery at one point seemed to be "grabbing" the other truck, Travis McMichael testified.

As Arbery got closer, Travis McMichael drew his weapon on Arbery, McMichael said. Arbery darted to the right and later, "straightens up and starts running back straight to the truck where my father's at the back of it." The younger McMichael testified he made his way to the front of the vehicle, and Arbery "turns and is on me, is on me in a flash."

"He grabs the shotgun, and I believe I was struck on that first instance that we made contact," Travis McMichael testified Wednesday.

"I shot him," Travis McMichael said, head lowered and voice cracking. "He had my gun, he struck me. It was obvious that he was attacking me; that if he would have got the shotgun from me, then it was, this is a life-or-death situation. And I'm gonna have to stop him from doing this, so I shot."

Speaking from the courthouse steps, Wanda Cooper-Jones, Arbery's mother, said she appreciated McMichael taking the stand because "it gave my family and I some insight on what he was actually thinking."

"Mr. Travis McMichael killed my son all on assumptions," she said. "He had no real facts or where Ahmaud was coming from, what Ahmaud had done. He just took actions into his own hands."

She added, "He didn't have any facts on hand when he chose to pull the trigger. Not one time, but three times."

Cooper-Jones was joined by Ahmaud's father, Marcus Arbery Sr. She said the family was grateful for the support they are getting.

In an interview with CNN's Wolf Blitzer, Ben Crump, attorney for Arbery Sr., dismissed McMichael's defense and said the trial has been very tough on Arbery's parents.

"It's heart-wrenching. That's why they need prayers, and they need the pastors' prayers for them, just so they can try to keep their sanity," Crump said.

"If this was your child, how would you keep composure after you see these people lynch him and then you see them offer this self-defense and people are actually taking this as if it's credible?" Crump said.

A rally at the courthouse attended by the Rev. Al Sharpton and other pastors to show support for Arbery's family is expected Thursday morning, and a march is planned in the afternoon.

The McMichaels, according to their attorneys, suspected Arbery of burglary in part because after they and several neighbors were concerned about people entering the under-construction home -- and after Travis McMichaels' encounter with a man in the neighborhood on February 11, 2020.

According to testimony, the deadly pursuit started with this: A neighbor, Matthew Albenze, called police on the afternoon of February 23 to say a man later identified as Arbery was at the construction site alone. Arbery ran off as the man called police, Albenze testified.

Gregory McMichael, investigators testified, said he initiated the pursuit after seeing Arbery speedily run by McMichael's home, and that he believed Arbery matched the description of someone who'd been recorded at the construction site before.

The prosecution has said surveillance videos do show Arbery at the construction site multiple times, including the day he was killed, but always without breaking in and without incident.

However, prosecution witnesses have testified that the McMichaels did not know for certain at the time of the chase that Arbery was at the site that day, or whether the man in the videos had ever taken anything from the construction site.

The owner of the unfinished home, Larry English Jr., testified in a September deposition -- played for jurors last week -- that he "probably" had told the McMichaels about incidents on his property. English said he never authorized the McMichaels to confront anybody on the construction site.

Arbery had no weapon when he was killed, authorities said.