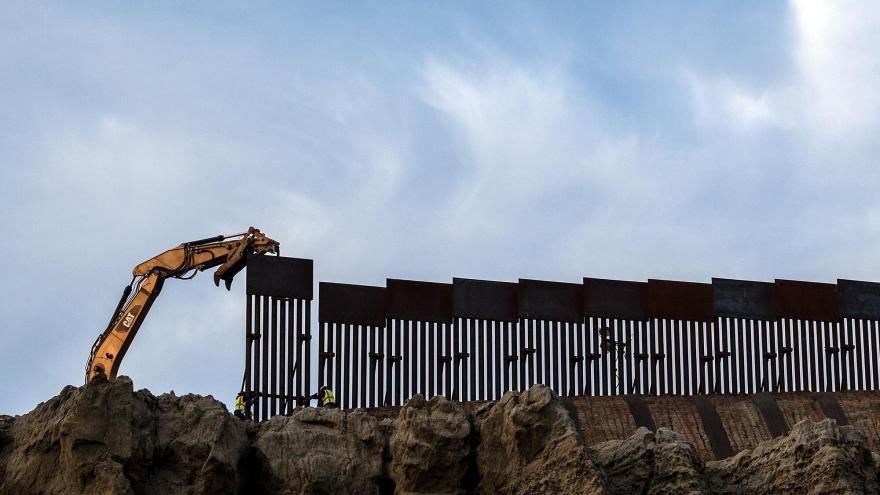 The Defense Department slams the brakes on the border wall as it reviews President Biden's order. A crew works replacing the old border fence of the US-Mexico border, as seen from Tijuana, Mexico, on January 8, 2019.

(CNN) -- The Defense Department will pause construction of the wall along the US-Mexico border as it reviews President Joe Biden's executive order calling for construction to grind to a halt.

The Army Corps of Engineers, which provides direction and oversight of border projects, "will take the appropriate actions in accordance with the (executive order)," said Raini Brunson, a spokesperson for the agency.

Activity may still continue at sites over the next few days to make sure they stay safe, an administration official told CNN.

Biden took an immediate shot at one of his predecessor's key legacies Wednesday evening when he signed a proclamation calling for border wall construction to come to an end.

"It shall be the policy of my Administration that no more American taxpayer dollars be diverted to construct a border wall," Biden's proclamation reads.

Over the last four years, billions of dollars had been put aside for additional barriers on the US-Mexico border, prompting a slew of lawsuits and pushback from environmentalists and Democratic lawmakers. Days from the end of his term, former President Donald Trump paid the wall a visit, citing it as an accomplishment of his administration.

The majority of the roughly 455 miles constructed during Trump's presidency replaced old, dilapidated barriers with a new enhanced wall system, a marked difference from the fencing previously constructed in some regions. Forty-nine miles have gone up where no barriers previously existed, according to the latest figures from US Customs and Border Protection.

"(Wednesday's) proclamation will likely result in what's called a suspension of work on the border wall," said Travis Sharp, a research fellow at the Center for Strategic and Budgetary Assessments. "During the suspension of work, the contractor must keep track of any additional expenses caused by the delay, so that the government can potentially reimburse those expenses later."