'Definitely getting better': The United States is making vaccine progress on several fronts, and experts are encouraged 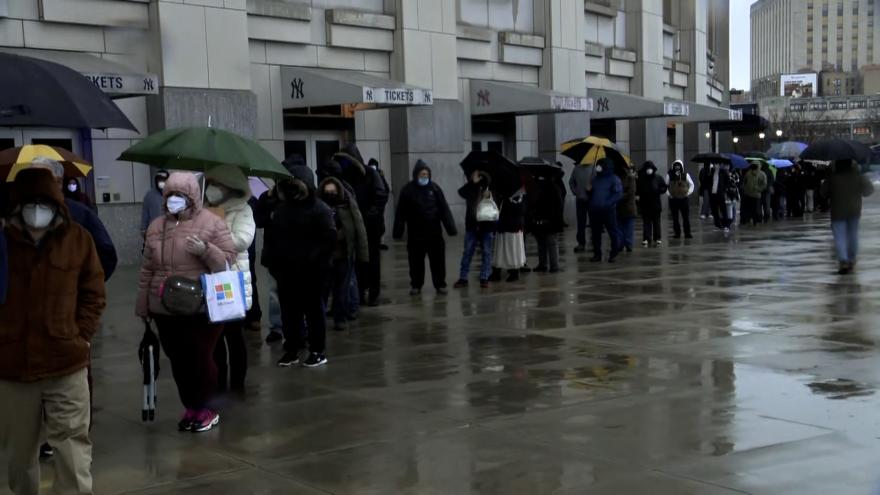 People line up for vaccines at New York\'s Yankee Stadium on Friday, the day its mass-inoculation site for Bronx residents debuted. - CNN

(CNN) -- The United States has seen progress on several fronts against Covid-19 this week -- including the opening of new mass inoculation sites and a third vaccine maker seeking authorization.

While health experts are concerned that more-transmissible coronavirus variants could worsen spread of the disease -- and in some cases put up a measure of resistance to vaccines -- some are also encouraged by where vaccination efforts are headed.

• The country has averaged 1.3 million new shots of Covid-19 vaccines a day over the last week despite a snowstorm that temporarily closed some sites in the Northeast. That's up from 1.1 million at one point last week, according to federal data, and moving toward President Joe Biden's hope of 1.5 million per day.

• Several mass-vaccination sites were set to open Friday. New York's Yankee Stadium began serving eligible residents of the Bronx Friday morning. Others set to open include San Francisco's Moscone Center and two sites in Maryland, including Six Flags America in Bowie. And National Football League Commissioner Roger Goodell has written to Biden, committing to use every team stadium as a mass vaccination site.

• As soon as next week, pharmacies such as those at CVS, Walgreens, Walmart, Kroger and Publix will offer vaccines in select stores and states to people who are eligible. One million doses will be sent to about 6,500 pharmacies in the first phase of a federal program.

• Johnson & Johnson officially asked the US Food and Drug Administration for an emergency use authorization of its one-dose Covid-19 vaccine Thursday. If approved, it would be the third vaccine in the US market, joining two-dose products from Pfizer/BioNTech and Moderna.

An FDA advisory committee will meet about the request February 26. The panel will make a recommendation that the FDA will consider when it makes a decision about whether to authorize.

Johnson & Johnson has reported what appears to be lower efficacy than the other two vaccines in preventing moderate disease. But the company has emphasized its candidate was tested when certain virus strains were more prevalent -- and that it still was 85% effective against severe disease.

And experts have pointed to potential advantages: Unlike the Pfizer and Moderna vaccines, Johnson & Johnson's would take only one shot; it does not have to be stored in freezers; and it can be stored for three months at refrigerator temperatures.

The addition of a new vaccine will boost supply and allow more people to be inoculated faster, Offit and other experts have said.

And "the weather is going to get warmer, and when that happens, it makes it less easy for this virus to be transmitted," Offit said.

"I really do think that we will get on top of this by summer or late summer, because I think everything now is moving in the right direction," Offit said.

Dr. Ashish Jha, dean of Brown University's school of public health, also said Friday the vaccination situation in the US "is getting better."

Dr. Michael Osterholm, director of the Center for Infectious Disease Research and Policy at the University of Minnesota, has warned more contagious coronavirus variants still could spur significant surges of infections in the coming weeks, and that vaccines alone may not prevent this.

New York to offer vaccines to people with underlying conditions

New York may be the first state to offer vaccine access to people with comorbidity, or the simultaneous presence of two or more medical conditions, no matter their age.

"New Yorkers with comorbidities and underlying conditions exist throughout the state's population -- they're our teachers, lawyers and carpenters, in addition to the doctors who keep us safe every day, and they are a highly affected population," said Gov. Andrew Cuomo. "We're committed to vaccinating vulnerable populations that have suffered the most as we distribute a strictly limited supply of vaccines, and people with comorbidities are 94 percent of the state's COVID deaths."

The governor's office listed cancer, chronic kidney disease, pulmonary disease and heart conditions as some of the comorbidities and underlying conditions that the state will use to determine eligibility for the Covid-19 vaccine.

About 75% of hospital workers have been vaccinated, and those who haven't will have until then to get their shots before access is opened to others.

Health departments will work with the state and the CDC to further determine which medical conditions qualify.

Where to find vaccine information in your state

How quickly the variants spread versus the speed of vaccinations will be a key factor in the number of coronavirus deaths over the coming months, according to a forecast from the Institute for Health Metrics and Evaluation at the University of Washington.

Currently, IHME projects the country's number of Covid-19 deaths per day will drop steadily through June 1, in part because of vaccine rollouts and polls showing increasing percentages of Americans saying they're willing to get vaccines.

The US has averaged more than 3,230 Covid-19 deaths a day over the past week, not far from the record average of 3,357 set on January 13, according to Johns Hopkins University.

But in a worst-case scenario, including rampant variant spread, daily death rates could rise again by March -- and even exceed 2,600 a day by mid-April before dipping, the IHME says.

"If the variants are more widespread and people go back to their previous life faster" after being vaccinated, "then you get closer to our worst scenario that we put out," IHME Director Dr. Chris Murray told CNN's Anderson Cooper Friday night.

The Centers for Disease Control and Prevention has said the B.1.1.7 variant could be the dominant US strain in March. This variant first identified in the UK, is already on track to becoming dominant in hotspots like Florida and Southern California "within a few weeks," according to a testing company called Helix that has helped identify the largest share of US cases.

At least 618 cases of variants that are believed to be more transmissible have been identified across 33 states, according the CDC. The vast majority of those -- 611 -- are the variant first identified in the United Kingdom (B.1.1.7), with a few others being those first identified South Africa (B.1.351) and Brazil (P.1).

At least one case, that of a man who was chronically infected over months, indicates that variants aren't just coming from overseas but can be home grown in US patients.

Genetic tests showed that the patient, who had an underlying condition that weakened his immunity, had been infected with the same virus all along but that it had been evolving as it replicated.

"It was incredible," said Dr. Jonathan Li, who leads a lab at Brigham and Women's Hospital in Boston studying viruses and their mutations and had been called in to help study the patient's case.

For now, Covid-19 cases and hospitalizations in the US have been dipping after a holiday-era surge.

CDC director: Guidance on reopening schools to be released in the coming week

The CDC will release guidance on school reopenings in the coming week, CDC Director Dr. Rochelle Walensky said during a White House briefing on Friday.

During the briefing, CNN asked whether one of Walensky's previous comments about schools -- that with proper distancing, masking and testing in place, schools could safely resume in-person classes even before all teachers get vaccinated -- was the CDC's official guidance.

"Among the things that we need to do to make sure that schools are safe is to make sure that the community spread of the disease is down," Walensky said. "We are actively working on the guidance, the official guidance, which will be released in the week ahead."

So far, 24 states and Washington, DC, are explicitly allowing some teachers or school staff to receive the vaccine.

The Biden administration announced on Friday that under the Defense Production Act, about 60 million at-home Covid-19 tests will be made available for the public by the end of this summer.

Those tests will be in addition to the at-home tests from the company Ellume that the administration previously announced, Tim Manning, Covid-19 supply coordinator, said during a White House news briefing.

"The country's well behind where we need to be in testing," Manning said.

"Over the coming weeks, the US government has plans to invest in another six suppliers to rapidly surge testing capability," Manning said.

On Monday, Andy Slavitt, the senior Biden White House adviser for Covid response, said during a White House briefing that the US Department of Defense and US Department of Health and Human Services are working with Australian company Ellume to provide more of its fully at-home Covid-19 tests to the United States and ship 100,000 test kits per month to the United States from February through July.

Now, "having 60 million more at-home tests available over the course of the summer is exactly what the country needs," Slavitt said during Friday's briefing.