Delta bans puppies and kittens from all its flights 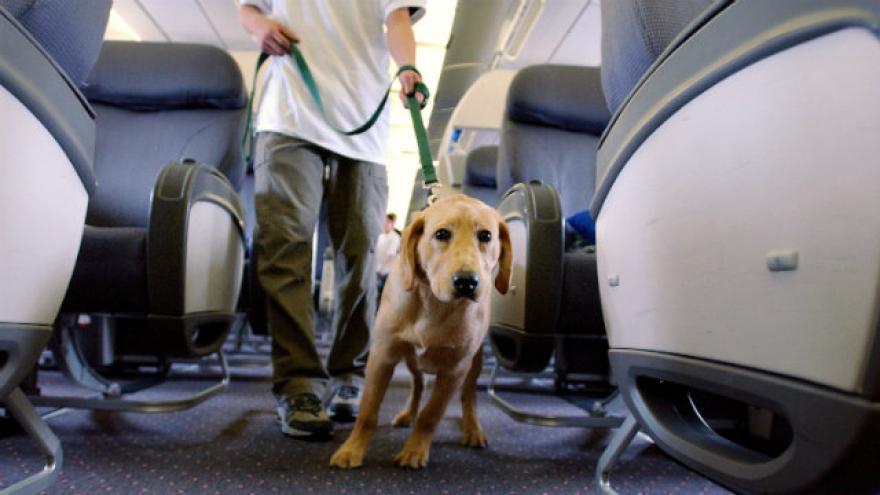 Booking a flight on Delta Air Lines? You may have to leave your fur babies behind. Photo courtesy Stephen Chernin / Getty Images

(CNN) -- Booking a flight on Delta Air Lines? You may have to leave your fur babies behind.

In keeping with a recent industry trend, the airline is placing more restrictions on service and emotional support animals on its flights.

The changes appear to be partly intended to address animals relieving themselves on airplanes. According to the airline, incidents involving service and support animals -- included urination, defecation, and biting -- increased 84% from 2016 to 2017.

In its announcement Delta referred to an incident last summer in which a passenger was hospitalized with facial wounds after he was attacked by a 50-pound dog -- an incident that was reported in the Atlanta Journal Constitution.

The airline says its new policy aligns with the US Department of Transportation's Air Carrier Access Act, which states that "airlines may require documentation stating that your animal will not need to relieve itself, or can do so in a sanitary way," on flights longer than eight hours.

As for the newly incorporated age restriction, the airline says it jibes with the vaccination policy of the CDC, which suggests animals should start receiving vaccinations no sooner than three months of age and that they should wait 30 days after vaccination before traveling.

Delta, which flies about 250,000 service animals a year, says the new regulations are aimed at protecting the rights of their customers.

"We will continue to review and enhance our policies and procedures as health and safety are core values at Delta," John Laughter, a senior vice president of corporate safety, security and compliance, said in the airline's press release. "These updates support Delta's commitment to safety and also protect the rights of customers with documented needs -- such as veterans with disabilities -- to travel with trained service and support animals."

If you purchased a Delta ticket before December 18 and have requested to travel with an emotional support animal, the airline says you are on the clear.

Service and support animals fly free on Delta -- unlike regular pets, which cost passengers $125 each way.

Delta says the number of service animals on its flights has increased nearly 150% since 2015. Perhaps as a result, in recent years the airline has been becoming stricter in its policies about animals on flights.

In March the airline started asking all passengers attempting to board with a service animal to show "proof," 48 hours before flying, that the animal is in good health and has been vaccinated. It also required passengers to sign a release form saying their animal would behave and to produce a letter signed by doctor or licensed mental health professional certifying they need a comfort pet.