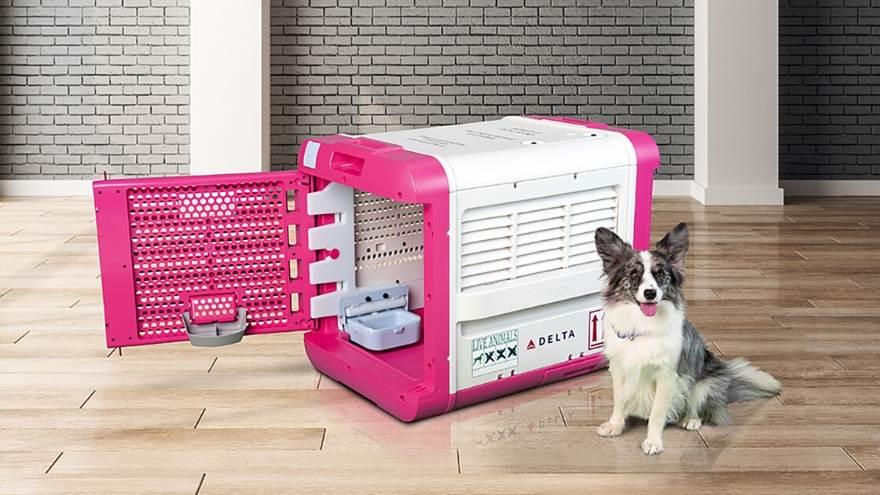 The CarePod, created through a partnership with a pet travel safety startup of the same name, also provides industrial-strength walls that are insulated to protect pets against weather changes and specially angled blinds to block out visual stress from unfamiliar environments.

Concerned pet parents can use their cell phone to view their pet's travel updates by connecting to Delta's cargo website. The built-in water bowl holds up to a liter of water that can refill itself to ensure pets always have access to fresh water. It's spill-proof, too.

With human grade materials that are non-toxic, UV and antibacterial treated for durability and protection, the carriers are safe, too. It's also compliant with the International AIr Transport Association's animal regulations, so pet owners don't have to worry about checking this before they buy.

For dogs and cats only, the CarePod is roughly under two feet high and large enough for a dog up to 50 lbs. Animals need to be able to sit and move around in the carrier, or else they can't fly.

The CarePod can be booked between three and 13 days before travel, and will initially be available at eight US airports in Atlanta, Boston, Los Angeles, Minneapolis, New York (JFK and LaGuardia), San Francisco and West Palm Beach, Florida.

Customers just need to arrive at least three hours before their flight with their pet on a leash or in a carrier, and any important documents such as a health certificate or Certificate of Acclimation.

Delta Cargo started working with CarePod on pet travel solutions in 2018, after deciding in 2016 to stop accepting pets as checked baggage after facing criticism for pet deaths in checked carriers.

The CarePod's launch also comes amid a recent federal proposal that would significantly limit the types of animals entitled to fly in aircraft cabins as emotional support animals.

It's a crackdown the airline industry has sought due to concerns some passengers are bringing their untrained pets aboard by passing them off as emotional support animals. The result is an increase in incidents such as bitings, defecating and urinating, according to the industry and Transportation Department.

The proposal would allow airports to deny passengers' emotional support animals and reclassify them as pets. Airlines would then have more room to decide their pet policies, including setting size limits and charging fees.

Passengers traveling with a service animal would be required to fill out a government form certifying the animal has been trained specifically to assist them with a disability. Falsifying the form would be a crime, which Transportation Department officials hope will keep people from doing so.

Airlines would still be required to accommodate service animals, but restrict the category to dogs only, leaving out some of the more exotic animals currently allowed, such as miniature horses and peacocks.

The department is accepting public comments for 60 days before it determines the final rule, which could take up to months or years.