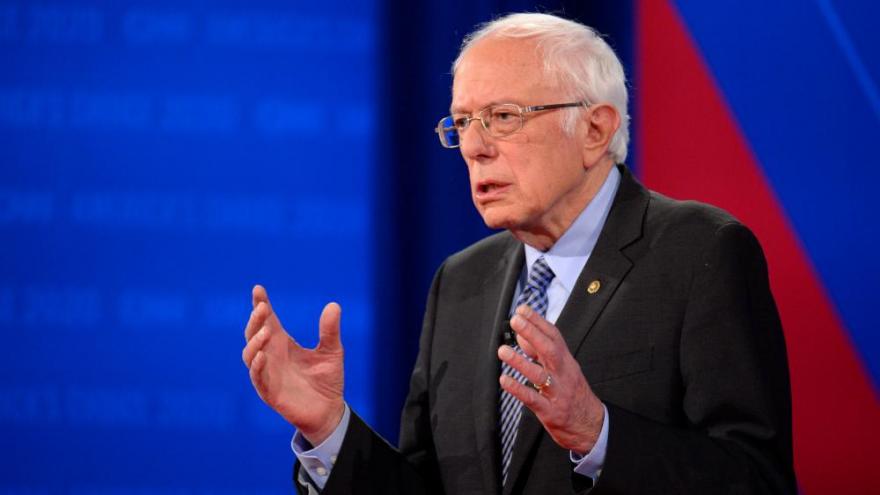 The 2020 contenders meet on stage on Tuesday with one final chance to halt the momentum of Vermont Sen. Bernie Sanders, days before the South Carolina primary and exactly one week before voters go to the polls in Super Tuesday states.

(CNN) -- Facing the real possibility that Bernie Sanders' march to the nomination could reach a tipping point in next week's contests, the other six Democratic contenders launched a fusillade of attacks on the Vermont senator Tuesday night, aimed at painting him as a candidate who would lose to President Donald Trump in November.

In the opening moments of the debate, former New York City Mayor Michael Bloomberg mocked Sanders' embrace of socialism, claiming that Russian President Vladimir Putin was trying to get him nominated so he would lose to Trump. Former Vice President Joe Biden took on Sanders' record on guns and questioned whether he would be soft on authoritarian leaders. Massachusetts Sen. Elizabeth Warren, who has avoided attacking her close ally, claimed she would be more effectual in enacting a progressive agenda. Minnesota Sen. Amy Klobuchar argued Sanders would alienate middle of the road voters with his expensive ideas.

And former South Bend, Indiana, Mayor Pete Buttigieg succinctly argued again and again that Sanders would sink the Democratic ticket in November, dragging House members and senators in swing states down with him.

During the prior nine debates, Sanders' Democratic rivals had tried a lighter touch -- quibbling with the cost of his ideas or arguing that they couldn't possibly make it through Congress. But with the South Carolina and Super Tuesday contests just days away, they adopted a far sharper tone during the CBS debate in Charleston as they sought to knock Sanders from his front-runner perch.

The debate was heated and chaotic with multiple candidates often shouting over one another in what became an incomprehensible garble of words. But with Sanders rising, even in South Carolina -- which Biden once claimed was his "firewall" -- their imperative was clear.

Sanders managed a quick shot at Bloomberg, targeting his wealth, during the opening minutes of the debate when asked to explain how he would campaign against Trump when the economy is doing so well.

"You're right the economy is doing really great for people like Mr. Bloomberg and other billionaires," Sanders said to laughter.

But after that moment, he was continually on defense.

Bloomberg immediately warned of Sanders' ideology as a democratic socialist, seeking to portray him as the weakest opponent against Trump.

"Vladimir Putin thinks that Donald Trump should be president of the United States," Bloomberg said. "And that's why Russia is helping you get elected, so you will lose to him."

Sanders shot back by speaking directly to Putin: "Let me tell Mr. Putin, who interfered in the 2016 election -- try to bring Americans against Americans," the Vermont senator said. "Hey, Mr. Putin, if I'm president of the United States, trust me, you're not going to interfere in any more American elections."

Buttigieg repeatedly turned the conversation to the effect that Sanders' liberal ideology could have on House members in once-red districts that were flipped to blue in 2018. He said that if Sanders becomes the Democratic nominee it would mean "four more years of Donald Trump, Kevin McCarthy as speaker of the House and the inability to get the Senate in Democratic hands."

Klobuchar pivoted to the cost of Sanders' proposals, arguing that they would alienate more moderate voters.

"We have a huge choice," Klobuchar said. "Do you want to have someone in charge of this ticket who wants to put $60 trillion in spending, three times the American economy? I don't think we do. I think we can get all the bold progressive things done without having someone so alienating that we're going to turn off the voters that we need to bring with us."

Sanders responded that his favorability ratings were "among the highest up here" onstage, and went on to defend his electability by arguing that he has built a "campaign of energy and excitement."

Though there is little evidence in exit polls to suggest that Sanders has broadened the Democratic coalition thus far, the Vermont senator promised to keep working toward the "largest turnout in the history of the United States."

"We need to bring working people back into the Democratic Party. We need to get young people voting in a way that they never have before. That is what our campaign is about."

Warren's rare shot at Sanders was an attempt to position herself as being be more effective in getting their ideas through Congress.

"Bernie and I agree on a lot of things, but I think I would make a better president than Bernie," she said. "Getting a progressive agenda enacted is going to be really hard, and it's going to take someone who digs into the details to make it happen. Bernie and I both wanted to help rein in Wall Street. In 2008, we both got our chance. But I dug in. I fought the big banks. I built the coalitions, and I won."

Sanders doubles down on Castro comments

But some of the sharpest exchanges were on foreign policy, which became a focal point over the past week after Sanders praised social programs implemented by Fidel Castro. During an interview with "60 Minutes," Sanders noted that Americans are "very opposed to the authoritarian nature of Cuba" but said it was unfair to "simply say everything is bad."

"When Fidel Castro came into office, you know what he did? He had a massive literacy program. Is that a bad thing? Even though Fidel Castro did it?" Sanders said in the recent "60 Minutes" interview.

On Tuesday night, one of the debate moderators noted that Sanders, a self-described democratic socialist, has a track record of expressing sympathy for socialist governments in Cuba and Nicaragua. "Can Americans trust that a democratic socialist president will not give authoritarians a free pass?" she asked.

"I have opposed authoritarianism all over the world," Sanders replied. He insisted that his recent comments about Cuba were in line with those that former President Barack Obama has made, praising the country's progress on education.

"It might be a good idea to be honest about American foreign policy, and that includes the fact that America has overthrown governments all over the world in Chile, in Guatemala, in Iran," Sanders continued. "And when dictatorships, whether it is the Chinese or the Cubans do something good, you acknowledge that. But you don't have to trade love letters with them."

Biden jumped into the conversation, objecting to the characterization of the former President's remarks.

"He did not in any way suggest that there was anything positive about the Cuban government," Biden said of Obama.

Earlier in the debate when asked why Russia would want to help Sanders' campaign, Buttigieg said Russian leaders want to sow chaos in the American election.

"They want chaos and chaos is what's coming our way," Buttigieg said. He described the past three years under Trump as "chaotic, divisive, toxic and exhausting."

Biden looks to go on offense before South Carolina

After his first strong showing in Iowa and his wins in New Hampshire and Nevada, several polls have showed Sanders encroaching on Biden's once-dominant lead among black voters.

In an effort to halt Sanders' rise, the former vice president targeted Sanders' record on guns, faulting him for voting against the Brady Bill in 1993. He noted that he had advocated for a longer waiting period in the bill before a person could make a handgun purchase, and that Sanders had opposed that. Biden then invoked the 2015 massacre at Mother Emanuel AME Church in Charleston.

"I'm not saying he's responsible for the nine deaths, but that man would not have been able to get that weapon had the waiting period been what I suggested," he said.

"Bernie in fact hasn't passed much of anything," Biden said at one point about Sanders' legislative record.

He also took Sanders to task for his past votes giving "absolute immunity" to gun manufacturers.

"Imagine if I stood here and said we'd give immunity to drug companies. We would give immunity to tobacco companies," Biden said. "That has caused carnage on our streets, 150 million people have been killed since 2007 when Bernie voted to exempt the gun manufacturers from liability. More than all the wars, including Vietnam, from that point on."

"I want to tell you, if I'm elected, NRA, I'm coming for you," Biden said, pointing his finger at the camera. "Gun manufacturers, I'm going to take you on and I'm going to beat you. I'm the only one who has done it."

In the back-and forth-about deaths due to gun violence, Biden's use of the 150 million figure was inaccurate. When CNN asked about it, his campaign said he misspoke. About 413,000 people in the US have died from gun violence since 2007. Biden is correct that that figure is more than the number of military casualties since the Vietnam conflict.

When Sanders was asked why he voted to give gun manufacturers a pass, he tried to turn the question on Biden -- to boos -- by noting that the former Delaware senator voted in support of the invasion of Iraq.

"My point was ... I have cast thousands of votes, including bad votes," Sanders said. "That was a bad vote."

He noted that he now has a D-minus rating from the National Rifle Association.

"I have a 6 million-person organization around this country: Moms Demand Action and Everytown," Bloomberg said. "We have got background checks in 20 states. So you can do it. It's Congress that can't seem to do it. And I don't know why we think they're going to do it. The vice president voted for a death bill, and supported the NRA. And certainly Senator Sanders has supported the NRA."

Sanders repeatedly argued that his positions on guns decades ago were not as relevant as his position now.

"Here is the good news, because of all these disgusting mass shootings, the American people now understand that we must be aggressive on gun safety; (we will) not be dictated to by the NRA, and I am proud I have a 'D minus' record from the right. If elected president it will be worse than that," he said.

Biden also defended his standing in the black community after the moderator noted that he has been losing ground among black voters in South Carolina.

"I've earned the vote, I've worked like the devil to earn the vote of the African American community, not just here but across the country," Biden said. "I've been coming here for years and years, creating jobs here, making sure that the port, for example -- that employs one in 11 people -- we put $500 million in our administration just into this county. We've created jobs for people."

This story has been updated with additional developments from Tuesday's debate.