Democratic lawmakers wrestle with how to proceed on immigration 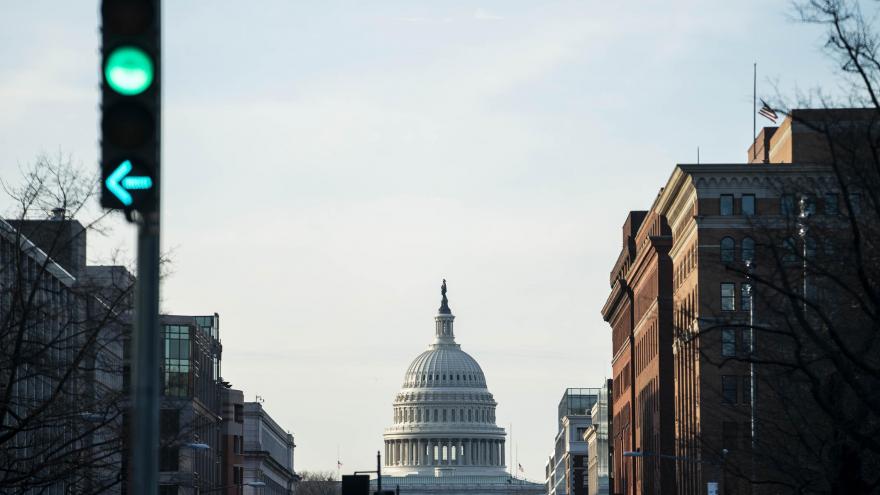 Democratic lawmakers are working on a series of immigration bills that would legalize undocumented immigrants, with some pushing for sweeping immigration revisions out of the gate and others urging caution. Pictured is the US Capitol in Washington on Friday, February 26. - Sarah Silbiger/Bloomberg/Getty Images

(CNN) -- Democratic lawmakers are wrestling with how to move forward with a series of immigration bills that would legalize undocumented immigrants, with some pushing for sweeping immigration revisions out of the gate and others urging caution.

Lawmakers are hoping to resurface immigration bills on the House floor before April 1, a period in which they can introduce legislation in the new session that's already passed in the chamber without going through committee again. Those bills would grant legal status to thousands of undocumented farmworkers and address immigrants who came to the US illegally as children, as well as two other programs, Temporary Protected Status and Deferred Enforced Departure, that offer temporary relief.

Then too there's President Joe Biden's immigration legislation, known as the US Citizenship Act, which tackles the whole US immigration system and seeks to legalize millions of undocumented immigrants already in the US.

Biden said during a CNN town hall this month that he wants a pathway to citizenship for undocumented immigrants residing in the US but signaled willingness to pass other immigration measures in the interim.

Democrats involved in the efforts are in talks with leadership about how to proceed with the immigration agenda in the House but decisions haven't been made yet, according to multiple members and aides. Leaders in the Congressional Hispanic Caucus are still holding education seminars with various groups within the Democratic caucus, according to one member.

"There are two camps. One is that we should have three separate votes and one that says we should bundle them all together," said one Democratic member who asked to speak on the condition of background to freely discuss the internal caucus conversations. "It's also unclear if they want to try to do this in a purely partisan way or do they want to try to build bipartisan support for it?"

The question of order and timing is in part a calculation about what can actually become law. While Democrats largely support legalizing millions of immigrants who are already in the country illegally, as Biden's proposal would do, there is a risk in passing a sweeping bill in the House only to watch it go nowhere in the Senate.

Moderate Democrats, some of whom won election in districts that Donald Trump carried in 2016 and 2020, fear that voting on a comprehensive immigration bill without a clear path in the Senate could open them up to unnecessary attacks. It's one thing, they argue, to vote on legislation that will become law, but it's another thing to vote just for the sake of messaging and then suffer political attacks later.

Lawmakers involved in previous attempts at immigration overhauls also concede that moving Biden's immigration measure forward is no easy feat, and instead focus on a piecemeal approach.

"If we look at reality, I think we know that it's easier to get bipartisan support on the DREAM Act and agriculture plan," said Democratic Rep. Henry Cuellar of Texas, citing two measures that previously passed the House and would provide relief to farmworkers and undocumented immigrants who came to the US as children.

One option could be to vote on the farmworker and Dreamer bills separately and keep working to see if changes could be made to the comprehensive bill to garner some Republican support down the line.

"In the abstract, my preference has been for a big comprehensive bill that has a lot in it and not piecemeal. It's easier to do some hard things when you do it that way," said Rep. Dan Kildee, a Democrat from Michigan.

"This is the struggle, whether we continue to just pass stuff that just initially is a statement of our values, knowing we then have to back down in order to actually legislate, and there is some tension within the caucus," Kildee added.

Others argue that Democrats should take advantage of the opportunity sooner rather than later.

This "is our moment to finally fix an immigration system that has been broken for decades. We can keep families together, stimulate our economy, and properly manage our border at the same time. The U.S. Citizenship Act will do just that. We must use this momentum to pass robust reform," said Democratic Rep. Linda Sanchez of California, who's leading the Biden bill on the House side, in a statement.

Rep. Pramila Jayapal, a Democrat from Washington state, echoed that. "We want to make sure we're not forgoing the possibility of a truly comprehensive bill for these other bills. If we do these smaller pieces, does that mean we're not going to get to the whole thing?" Jayapal told CNN. "Let's just push hard on all the different places."

House Majority Leader Steny Hoyer, a Maryland Democrat, confirmed on a call with reporters this week that putting a bill on the House floor by March 8 is "being discussed," but he didn't offer a timeline.

"This is a hiccup where we have to figure out what's going on the floor, but ultimately it's going to be up to the Senate," said a source familiar with the discussions.

The Senate would need 10 Republican lawmakers to cross the aisle and vote for a comprehensive immigration bill, something that doesn't seem plausible in the wake of Trump's recalibration of the party's positions on immigration.

During the Trump administration, many Republicans on Capitol Hill moved farther to the right to restrict even legal forms of immigration. The former President's border wall -- a lightning rod for Democrats -- became synonymous with gaining control of the southern border for the Republican base, and even senators who worked on the 2013 comprehensive immigration overhaul, like Republican Sens. Marco Rubio of Florida and Lindsey Graham of South Carolina, have made it clear they would prefer a piecemeal approach this time.

Democrats have the advantage of controlling all three branches of government. Senate Majority Leader Chuck Schumer, a New York Democrat, could bring immigration legislation to the floor even if it didn't have the votes to pass, but the timeline for something like that is still far off, given other measures, like Biden's infrastructure package, that the Senate is working through.

Immigrant advocates have stressed the need for a legislative revamp after years of constant policy changes and executive actions that have put millions of lives in limbo. They find themselves in the unusual spot of supporting Biden's bill, and the vision it lays out, while recognizing there may be more success in passing smaller measures for the time being.

"Our movement is so hungry for a breakthrough this year that we are focused on what's going to get us from today to the finish line with a breakthrough victory," said Frank Sharry, the executive director of America's Voice, an immigrant advocacy organization.

"It's fine if you want to vote on it, but what we're trying to do is get momentum that leads to a victory," Sharry said, referring to Biden's immigration bill. "It's not really either/or. It's now and later."

Jorge Loweree, policy director at the American Immigration Council, noted how previous attempts at an overhaul hang over the latest effort to pass sweeping legislation.

"What's playing out behind the scenes is an assessment in real time of what's possible in this particular Congress, in this moment. And it's in response to the way we've pursued immigration reform previously, which is to cobble everything into one bill, rally everyone behind it and only to see it fall apart," Loweree said.

In a letter to the White House on Friday obtained by CNN, a group of immigrant advocates urged the President to push Democratic lawmakers to "pursue every possible avenue to deliver for immigrant communities without delay," starting with measures addressing immigrant youth, Temporary Protected Status holders, essential workers and farmworkers.

"With passage in the House of these bills, we expect the White House to go all in on a strategy urging the Senate to pass permanent solutions for immigrant youth, TPS holders and farmworkers. These are clear, attainable and immediate steps Democrats can take to set President Biden's bill, and the larger objective of citizenship for all 11 million undocumented immigrants, in motion," reads the letter.

A member of the Congressional Hispanic Caucus who requested anonymity to speak freely told CNN that debate within the party on these kinds of issues is expected. "There isn't any major bill that comes to the Congress where there isn't some internal debate about what exactly it should look like. It's the same thing with this bill," the member said.

Still, the message from groups advocating for immigrants in the US is clear: "Just move in March," Sharry said.