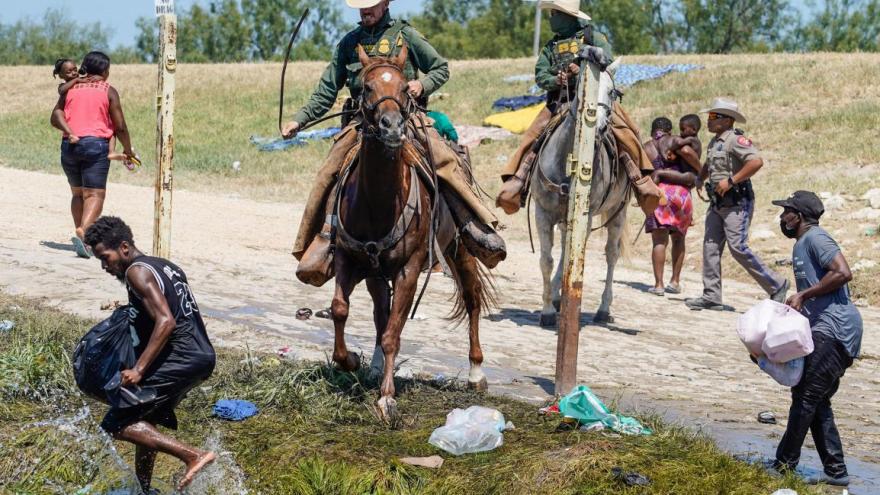 United States Border Patrol agents on horseback try to stop Haitian migrants from entering an encampment on the banks of the Rio Grande near the Acuna Del Rio International Bridge in Del Rio, Texas on September 19.

(CNN) -- Democrats are blasting the Biden administration for its treatment of Haitian migrants at the Southern border and want answers from officials after videos from other outlets appear to show border patrol officials using aggressive tactics when confronting them.

The requests comes days after videos taken by Al Jazeera and Reuters appear to show law enforcement officers on horseback including authorities swinging long reins near migrants who crossed the US-Mexico border near Del Rio, Texas.

Reuters video shows the officers at the water's edge, twirling the long reins as migrants crossed the border at the US shoreline of the Rio Grande. At one point in the video, the officer's horse nearly charges into one of the migrants, who falls back and into the water.

As a response to these videos, Democratic lawmakers have railed against the administration officials who have yet to explain what happened in these instances at the southern border.

Nine members of the Congressional Black Caucus met with domestic policy adviser Susan Rice, director of public engagement and former Congressman Cedric Richmond, and Tina Flournoy, Vice President Kamala Harris' chief of staff on Thursday and reiterated that they plan to respond to the actions by Customs and Border Protection with congressional action.

The nine lawmakers, which included CBC Chairwoman Joyce Beatty of Ohio, and Reps. Shelia Jackson Lee of Texas, Barbara Lee of California. Gregory Meeks of New York, Troy Carter of Louisiana, Hakeem Jeffries of New York, Yvette Clarke of New York, Ritchie Torres of New York and Steven Horsford of Nevada, said in a statement hours after the meeting they wanted humanitarian assistance for the migrants and an investigation of the "violence against Haitian migrants, public release of the results of the investigation and call for removal of Customs and Border Protection agents identified in photos on horseback brutalizing migrants."

"This treatment will not be tolerated," Beatty said in a statement Wednesday evening. "The Congressional Black Caucus is committed to supporting Black people across the diaspora and we pledge our support to the people of Haiti."

She added, "Following today's dialogue, we are hopeful for increased U.S. support, including development aid and logistical resources to assist with earthquake and pandemic recovery in Haiti."

At a news conference Wednesday, Democratic Rep. Maxine Waters of California, who didn't attend the White House meeting, demanded answers from the administration.

"I'm pissed. I'm unhappy. And I'm not just unhappy with the cowboys who were running down Haitians and using their reins to whip them. I'm unhappy with the administration. We are following the Trump policy," she said. "What we witnessed is worse than what we witnessed in slavery: Cowboys with their reins whipping Black people, Haitians, into the water."

"(T)housands of Haitians and other migrants have arrived in Del Rio, Texas, over the past week and are now seeking shelter in squalid conditions under a bridge," they wrote in the letter. "Despite the Administration's rapid deployment of personnel and resources in response to this crisis, much of the strategy to address the care of these vulnerable individuals is deeply concerning."

The Biden administration is still relying on a Trump-era border policy linked to the coronavirus pandemic that allows border authorities to swiftly remove migrants apprehended at the US-Mexico border. Over recent days, the administration has ramped up those removals and increased the pace of repatriation flights to Haiti, a fact Thompson and Meeks cited in their letter.

"Specifically, we urge the Administration to halt repatriations to Haiti until the country recovers from these devastating crises," they wrote. "We are troubled by the plan to repatriate thousands of people to Haiti, despite the instability, violence, and devastation that continue to plague the country."

Biden has not publicly addressed situation

The Biden administration is receiving bipartisan criticism of the crisis at the US-Mexico border amid stunning images that appear to show US law enforcement officers on horseback using aggressive tactics with migrants, who are largely Haitian. The White House's response, thus far, has largely been focused behind the scenes as critics compare the Biden policy of deporting migrants to aggressive measures taken in the Trump administration.

President Joe Biden has not publicly addressed the situation since Tuesday, when he briefly responded to a shouted question on the matter as he departed the United Nations General Assembly.

"We will get it under control," Biden said, declining to elaborate further.

Harris, who has been tasked with finding solutions to address root causes of migration, expressed horror at the images during a childcare event in DC on Tuesday.

"What I saw depicted about those individuals on horseback, treating human beings the way they were is horrible. And I fully support what is happening right now, which is a thorough investigation into exactly what is going on there," Harris said.

"But human beings should never be treated that way and I am deeply troubled by it and I'll also be talking with (Department of Homeland Security) Secretary (Alejandro) Mayorkas later today about it," she added.

Harris sidestepped answering whether she will expand beyond her role leading diplomatic efforts to slow the migration in Central America to include the migration issues of Haiti when asked, but said more needs to be done to support the basic needs of the Haitian people.

"The whole point is that we have to understand Haiti," Harris said. "I mean, talk about a country that has just experienced so much tragedy that has been about natural disasters, the head of state assassinated, and we really have to do a lot more to recognize that as a member of the Western Hemisphere, we've got to support some very basic needs that the people of Haiti have to get back up," and not leave their home country, the same stance she has taken to migration from Central America.

The readout of that call with Mayorkas released a day later suggested tension between Harris and the Department of Homeland Security, saying she raised "grave concerns" about the treatment of Haitian migrants during their call, though it read Mayorkas shared the same concern.

Carter, one of the lawmakers who met with administration officials Wednesday, told CNN the meeting between the White House and Congressional Black Caucus members was a "substantive conversation," where the group expressed their outrage at the images of Border Patrol's treatment of Haitians in Del Rio and deportations.

Carter said the officials were responsive, shared their outrage and committed to not sweeping it "under the rug," and or letting it become yesterday's news.

"We all left that meeting with a feeling we were heard and that there's going to be ramifications for the actions we saw," he said.

Carter added that there was no discussion about the Vice President's role.

"White House officials highlighted the President's commitment to implementing a safe, humane, and orderly immigration process. Officials also emphasized the Administration's commitment to providing aid to the Haitian people as the largest humanitarian donor in Haiti," a White House readout of the meeting said.

Biden has no public events on his schedule Thursday, and Harris meets separately with the leaders of Ghana and India, where reporters could have a chance to ask her questions on the evolving situation.