Democrats see hope for a clean energy bill, but Manchin is adding a new hurdle: More funding for fossil fuels 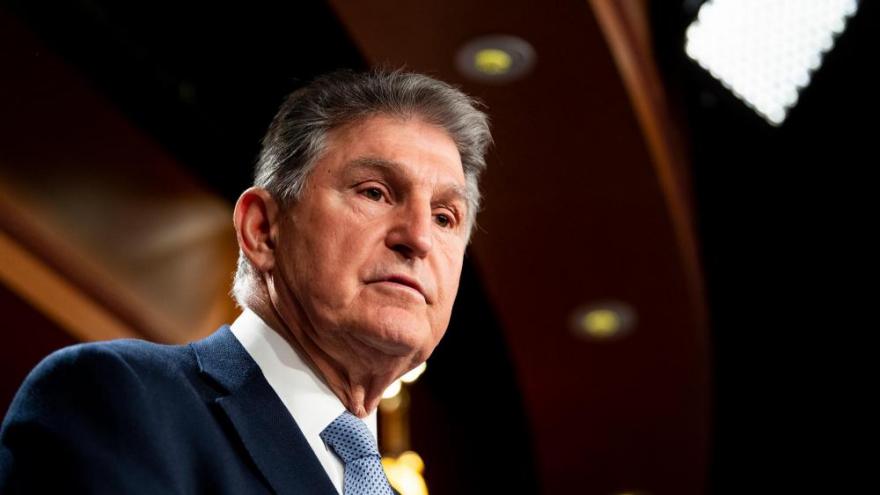 (CNN) -- Congressional Democrats are cautiously optimistic to see Sen. Joe Manchin back at the table on the clean energy bill he previously declared "dead." The senator has been engaging with the White House on measures that could be included in a new package, and recently met with US Climate Envoy John Kerry over dinner in Paris.

But there's a new potential roadblock: Manchin now wants to include funding for more fossil fuel infrastructure in the US, in part because of the energy crisis in Europe.

"You have to," Manchin told CNN earlier this week. "You want to be Europe? You can't leave yourself vulnerable. The US has to be energy independent. You have to have infrastructure to do that, and you can't just shut them down or kill them with a thousand cuts."

Exactly how much money Manchin wants to dedicate to fossil fuels compared to investments in clean energy is so far unclear, as his conversations with the White House continue.

At this point, there are no direct or formalized conversations between Manchin and House progressives, a source told CNN. Instead, talks are far more informal.

But some progressives already seem resigned to the fact that they'll eventually have to cut a deal with Manchin, and that trading fossil fuel funding for clean energy investment is a price they may have to pay.

"If we have to have things that are going to have an increase of short-term [fossil fuel] production for massive investments in climate that will long-term increase our renewable energy -- that is in my view worth doing," said Rep. Ro Khanna of California, a deputy whip in the Congressional Progressive Caucus. "I think we can get to a deal that will have bold climate provisions and that will be a compromise that will advance the climate goals."

"I think we're going to be open to other provisions that Sen. Manchin might want to advocate for, so I'm looking forward to a conversation about any additional provisions that he might be interested in," Markey told CNN. "Obviously we are still working hard in order to get the $555 billion for the climate provisions that were in the Build Back Better bill."

For many progressives, cracking the door open to renegotiating on climate legislation with Joe Manchin has been met with hope that something can get done before the midterms. But many want more specifics on what the West Virginia senator is asking for.

"It is too hard to even know what he is talking about, so I don't want to respond unless there is something specific," Rep. Pramila Jayapal, the chairwoman of the progressive caucus told CNN. "I would have to see it."

Sen. Bernie Sanders, who pointedly criticized Manchin during the Build Back Better negotiations in December, told CNN he didn't want to discuss the senator when asked about the reengagement.

But with the midterm elections approaching fast on the horizon, Democrats are desperate to lower gas prices for consumers. And with a growing realization that Republicans could reclaim House in November -- quashing any hope of passing climate provisions soon -- some progressives are signaling they want to hear Manchin out.

The main negotiations Democrats are watching are ones between Manchin and the White House. Manchin has started to reengage with Biden's team on what he wants to see a reconciliation package to look like, laying out what energy, prescription drug costs, tax changes and deficit reduction measures he could potentially support.

But the stakes have also changed, with Russia's brutal war on Ukraine and resulting global energy shocks forcing some, including Manchin, to rethink the original $555 billion in climate and clean energy provisions that made up the better part of Biden's economic package. Along with Congressional Republicans, Manchin has been hammering the Biden administration for what he characterizes as not allowing companies to produce enough oil and gas on public lands.

It's clear Manchin wants some additional fossil fuel infrastructure out of the latest bill, but the parameters of a deal are still not decided. A source familiar with the discussions said Manchin has also continued to negotiate with Senate Environment and Public Works Chair Tom Carper over a methane program that would levy a fee on oil and gas companies that emit methane above a certain threshold, and include $775 million in grants and incentives to help companies fix leaky pipelines and equipment to stay below the threshold.

Some House Democrats argue cutting a deal could, at the very least, move the US closer to meeting Biden's climate commitments, even if it doesn't get the country as far as they initially hoped to go.

"I think we have to be open minded at this point. We desperately need climate provisions because the clock is running out so if the grand bargain is desperately needed investments right now to make sure we are ready to get to net 0 by 2050... let's do what we have to do," Rep. Raja Krishnamoorthi, an Illinois Democrat, told CNN.

Others who saw how the last round of Build Back Better negotiations with Manchin ultimately turned out are feeling a bit indignant about this new ask.

"I don't want to prejudge anything, I want to see what can pass through the Senate, but I am appalled by the idea that we would deepen our reliance on fossil fuel at a time that is opportune for clean energy," said Rep. Mondaire Jones, a progressive member from New York.