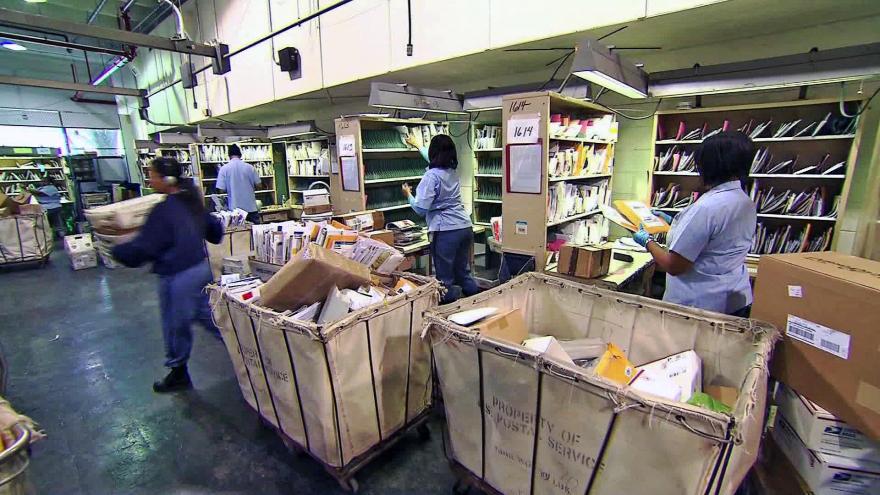 Democrats are discussing whether to bring the House of Representatives back as early as next week to discuss some of the issues facing the United States Postal Service.

(CNN) -- Democrats are seriously considering whether to bring the House of Representatives back as early as next week to discuss some of the issues facing the United States Postal Service, one source familiar with the matter told CNN.

The House Democratic leadership held a call late Saturday to discuss the possibility, three House Democratic aides and a source familiar with the matter said. There was significant support for bringing the House back on that call but no final decision was made.

"Yes there are discussions to bring the House back to address the Postal Service crisis. Timing (is) not clear yet. Next week and week after (are) being discussed," one of the aides said.

Possible action by the House could include forbidding the Postal Service to change sorting devices, prevent the closure of facilities, stopping any effort to end overtime pay or changing the timing of mail delivery, one of the sources said. Democrats also may push language requiring all ballot deliveries to have first class status.

The issue is that members are getting heavily criticized in their districts during this recess period for not coming back and trying to do something about the postal issue. The open question that leadership is trying to figure out is whether or not it will be looked at as purely political to pass a measure that they know won't make it through the Republican-controlled Senate.

Politico first reported the possibility of the House returning from recess.

This comes amid the run-up to the 2020 presidential election in November as many voters across the US are expected to vote by mail because of the Covid-19 pandemic. Although the USPS has repeatedly tried to reassure voters they can handle the influx of mail-in ballots, in newly released letters, the USPS sent warnings to nearly every state that slowdowns in delivery could cause ballots to show up late and not be counted.

CNN and other news organizations reported that in the last week, the USPS has removed letter collection boxes in at least four states: New York, Oregon, Montana and Indiana.

Representatives at the United States Postal Service's national headquarters in Washington were still unable to confirm whether they would stop removing letter collection boxes as of Saturday afternoon.

Rod Spurgeon, a USPS spokesperson for the service's Western region, told CNN on Friday night that postal employees in 16 states and parts of two others would stop the removal of letter collection boxes until after the election.

But it's unclear whether or not the policy confirmed by Spurgeon is still in effect or if they will be returning the removed letter collection boxes to their previous locations.

CNN has reached out to Spurgeon for an update, and repeated inquiries to other regional and state USPS spokespersons went unanswered.

CNN also reported that the USPS began notifying postal workers in at least three states -- West Virginia, Florida and Missouri -- that they will start to reduce their retail operating hours, according to union officials.

On Friday afternoon, USPS spokesperson Kim Frum suggested the removal, and installation, of the almost 142,000 letter collection boxes nationwide was routine, and "has been based on mail volume received in those boxes."

Frum said that the postal service has been putting more emphasis on stabilizing the number in use and moving "low-use boxes to high traffic areas." She has not responded to CNN's questions about the reduced hours in West Virginia, Florida and Missouri.

The removal of the letter collection boxes drew intense criticism from Democrats, including presumptive Democratic presidential nominee Joe Biden, who called the removal "bizarre" during an online fundraiser Friday evening.

In a letter to newly installed Postmaster General Louis DeJoy, Sen. Jon Tester, a Montana Democrat, asked for the head of the USPS to confirm the removal of collection boxes, the rationale for the move and what has been communicated to the public on the matter.

Lawmakers from both parties and postal union leaders have sounded alarms over disruptive changes instituted by DeJoy this summer, including eliminating overtime and slowing some mail delivery. Democrats claim he is intentionally undermining postal service operations to sabotage mail-in voting in the November election -- a charge he denies.

Last week, Sen. Elizabeth Warren, a Massachusetts Democrat, and eight other Democratic lawmakers asked the inspector general to launch an inquiry into DeJoy on a number of fronts, including the nationwide policy changes he's made since taking over in June, as well as whether DeJoy has "met all ethics requirements."

The internal watchdog at the USPS is reviewing controversial policy changes recently imposed under DeJoy, and is also examining DeJoy's compliance with federal ethics rules, according to a spokeswoman for the USPS inspector general and an aide to Warren, who requested the review.

CNN first reported earlier this week that DeJoy still owns at least a $30 million equity stake in his former company -- a USPS contractor -- and that he recently bought stock options for Amazon, a USPS competitor. These holdings likely create a major conflict of interest, ethics experts told CNN, though DeJoy and USPS maintain that he has complied with all federal requirements.

Trump said Thursday that he opposes much-needed USPS funding because he doesn't want to see it used for mail-in voting this November. The pandemic has led to record-breaking levels of voting-by-mail, but Trump has tried to restrict the method because he claims it is rife with fraud and abuse, claims that CNN has fact-checked multiple times and are largely without merit.

House Speaker Nancy Pelosi said Democrats were pushing to include $25 billion for USPS in the next stimulus bill because that was what was requested by the bipartisan board of governors who run USPS and were appointed by Trump.