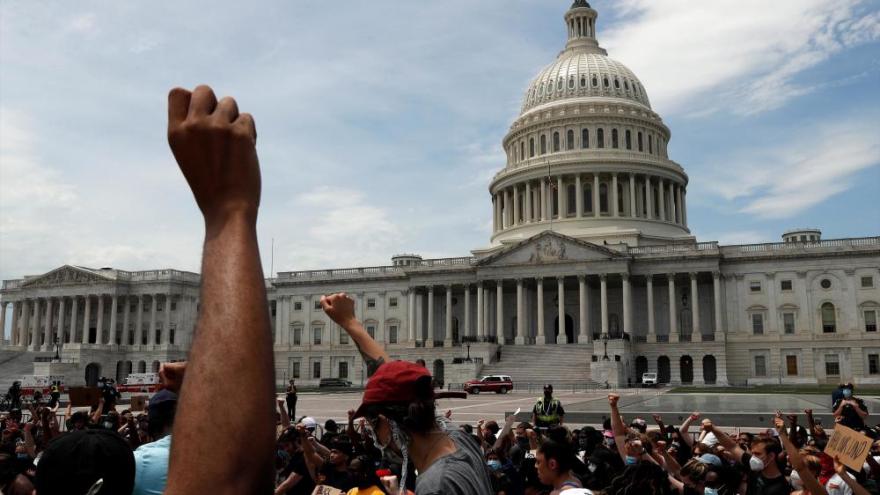 Demonstrators protest the death of George Floyd as they gather Wednesday, June 3, 2020, on the East side of the U.S. Capitol in Washington.

(CNN) -- Democrats will put forward sweeping policing legislation Monday aimed at cracking down on police brutality and recording patterns of misuse of force across the country -- the first sign that Washington is taking action as a national movement emerges.

The legislation -- which was led by the Congressional Black Caucus, Democrats on the House Judiciary Committee and Democratic Sens. Kamala Harris of California and Cory Booker of New Jersey -- comes as the country is reeling from the deaths of several black Americans at the hands of the police, including George Floyd, who was killed in Minneapolis last month after a white police officer knelt on his neck for more than eight minutes.

The legislation is the most expansive effort in recent years to crack down at a federal level on policing practices across the US, but it is expected to face strong resistance from Republicans, police unions and local officials who don't want Washington intervening in their policy making.

"This is a powerful movement and it has made legislation like this, that was probably impossible to do a month ago, possible," Booker told CNN in an interview Sunday.

According to a summary document obtained by CNN, the legislation includes a ban on chokeholds, as well as the creation of a National Police Misconduct Registry "to prevent problem officers from changing jurisdictions to avoid accountability."

The bill also incentivizes states and localities to mandate racial bias training and teach officers about their "duty to intervene." The bill sets certain restrictions on the transfer of military-grade equipment to state and local law enforcement and requires federal uniformed police offers to wear body cameras.

It also includes anti-lynching legislation that has been languishing in the Senate. The anti-lynching bill sparked an emotional debate on the Senate floor last week when Republican Sen. Rand Paul of Kentucky attempted to amend the legislation, which he argued was too broad. Sens. Harris and Booker rose in opposition just as Floyd's memorial service was underway thousands of miles away.

"It was just unfortunate that he would do that on that day. It was unnecessary and quite frankly just very painful to many people," Booker said.

The legislative initiative is just the beginning of the congressional action. On Wednesday, the House Judiciary Committee will hold a hearing on policing and oversight. Floyd's brother, Philonise Floyd, is expected to testify, according to a committee aide.

The legislative effort comes as protests against police brutality and in support of racial justice have sprouted up across the country in both big cities and in rural communities. Over the weekend, thousands of marchers in Washington, DC, gathered on the National Mall. Gatherings, vigils and protests made the news from rural Montana to the streets of Portland, Maine.

"So many Americans have been taking to the streets throughout the country. Black, white, Latino, Asian, young, old, gay, straight, citizens, dreamers -- people across the spectrum of the gorgeous mosaic of the American people say enough is enough, and Congress needs to hear those cries and act upon them, and that's what House Democrats intend to do," Democratic Rep. Hakeem Jeffries of New York told Dana Bash on CNN's "Inside Politics" on Sunday.

Democrats are unveiling their policing legislation at a moment when some activists on the left are calling for broader efforts to defund the police. Some liberal lawmakers have voiced support for the movement, while others have offered more nuanced approaches to funding.

Republicans have yet to signal an embrace of the Democratic policing legislation being unveiled Monday. While Republican Sen. Lindsey Graham of South Carolina, the chairman of the Senate Judiciary Committee, announced last week that he would hold a hearing on police brutality on June 16, many Republicans in the Senate have argued Congress should not be setting nationalized policing policies and that instead, states and localities should take their own actions.

"This is sort of classic Washington. You have one isolated and tragic event and people extrapolate that and suggest this problem is an epidemic. And I think as terrible as what happened to Mr. Floyd was and as much as he and his family deserve justice, you cannot paint with such a broad brush and condemn law enforcement and say this is a systemic failure," said Sen. John Cornyn, a Republican from Texas. "This idea that all of a sudden Congress needs to put the public health crisis on hold, which, by the way, it won't stay on hold ... to deal with this is just, I think, hysteria."

Republican Sen. Roy Blunt of Missouri said he didn't think it was possible to come up with a nationalized, legislative response for policing.

Jeffries rejected the Republicans' view that Congress should sit on the sidelines.

"In terms of the police officers that I deal with here in New York City, the overwhelming majority are good individuals who are hardworking and who are in the community to protect and serve, but we cannot deny that we have far too many brutal officers. ... We have to address that phenomenon. That is why so many Americans have been taking to the streets throughout the country."