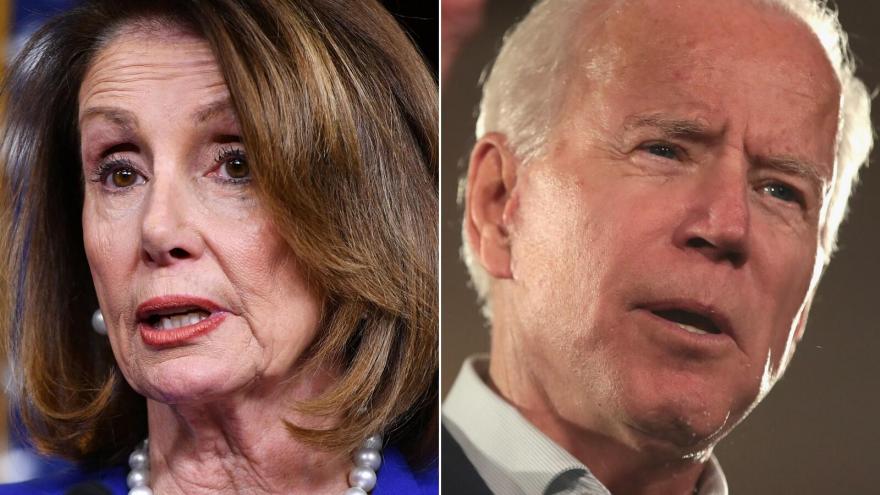 It's a critical week of negotiations for Democrats about how to move ahead with President Joe Biden's Covid relief package.

(CNN) -- It's a critical week of negotiations for Democrats about how to move ahead with President Joe Biden's Covid relief package.

It will play out behind the scenes and ultimately have far bigger impact on Biden's legacy, test his ability to manage his party's diverse coalitions and ultimately make the very first impression of whether Democrats will be able to govern with their narrow majorities in the House and Senate.

Of course the impeachment trial of former President Donald Trump will consume Congress and Washington this week.

Bottom Line: Democrats are going to be united on impeachment. The question is whether they can stay together in Biden's first big legislative push.

What to watch on Monday

The House Ways and Means Committee could unveil a summary of their portion of the Covid relief bill on Monday. That would include their new proposal to boost the child tax credit to at least $3,000 per child.

The places to watch

There are two critical areas where Democrats are beginning to show deep divisions in how they look at the policy of the coronavirus relief bill. On a macro level this is a fight about how far to stretch the constraints of that special budget tool known as reconciliation. But, at a deeper level, this is a disagreement between the two wings of the Democratic party: those who hail from rural and swing states where progressive politics are hard to defend and where Biden's victory and narrow Democratic majorities are seen as an opportunity for bipartisanship and those who represent reliably blue states where not fighting to raise the minimum wage to $15 an hour could result in a primary challenge and where Biden's victory is seen as a mandate.

No issue has revealed this dichotomy more clearly than the $15 minimum wage. It's a policy that progressives have been fighting for years. It's an issue Sen. John Hickenlooper, a moderate from Colorado, even campaigned on. But, it's an issue that Sen. Joe Manchin, a Democrat from West Virginia, has already come out against.

Over the weekend, Biden conceded that the provision probably wouldn't even make it through the strict scrutiny of reconciliation. And Manchin's not the only Democrat who has been outspoken in caucus calls about raising the minimum wage to $15 an hour overnight.

But, it's not clear that not even trying to jam it through is an option for the Budget Committee Chairman Bernie Sanders. Sanders has made it clear that the $15 is a key priority and Senate Majority Leader Chuck Schumer is operating with no room for error as he needs all Democrats to back a plan in order to pass it through the Senate.

The income threshold for $1,400 checks

The question of who should be eligible to receive $1,400 stimulus checks has become one of the bigger sticking points of these negotiations. Democrats in the House had been operating under the assumption that the Biden administration wanted the income threshold cut.

It seemed like the one area of compromise between Democrats and Republicans, who had made their case to Biden last week in their private Oval Office meeting, that the income threshold was far too high. But, over the weekend, things started to shift. One Democratic aide told CNN the Biden administration began signaling that they may not want to change the income threshold after all and key Senate Finance Committee Chairman Ron Wyden of Oregon came out last week against lowering the threshold.

It's another place where we are beginning to see that Democrats having the majority of the House, the Senate and control of the White House doesn't guarantee that writing this Covid relief bill is going to be easy.

While the Senate impeachment trial gets underway Tuesday at 1 p.m. ET, the House committees are aiming to finalize their legislative text and mark up their sections of the coronavirus relief bill by the end of the week. The House Ways and Means Committee, which has broad jurisdiction over the Covid-relief bill, could unveil their portion of the bill as soon as Monday. The markup is expected Wednesday and Thursday. Education and Labor will hold their mark up Tuesday. Several other committees will mark up their portions of the bill on Wednesday. These are noteworthy events even as they will likely get lost in the drama of impeachment.

The goal is for all the committees to pass their portions out of committees and send it to the Budget Committee by February 16, where the larger bill can be packaged together, passed out of Budget and put on the floor the following week. It all sounds easy until it isn't.

It's important as we move through this process to remember the lessons from Republicans' repeal and replace the Affordable Care Act debacle in 2017. That effort, which started in January 2017, took months. In the end, the votes never materialized when the Senate voted in July. It turned out there was more support for the campaign slogan of "repeal and replace" than there was GOP agreement about what a new health care plan would be.

As multiple Democratic aides have pointed out to me, giving people $1,400 checks is far easier than taking away a benefit. But, it's not unfair to say that it's always easier to agree in principle that Americans need another Covid relief package than it is to decide exactly what those needs are. Both the moderate and progressive wing of the Democratic party are going to see the next several weeks as a test of how they can influence legislating in the future. And, you can expect that this fight is seen as a proxy for how the next two years will unfold. Any wing of the party can derail this effort. It takes a handful of progressives in the House or a single moderate in the Senate. There isn't room here for folks to dig in. And if anyone decides they will, the entire effort could crumble.