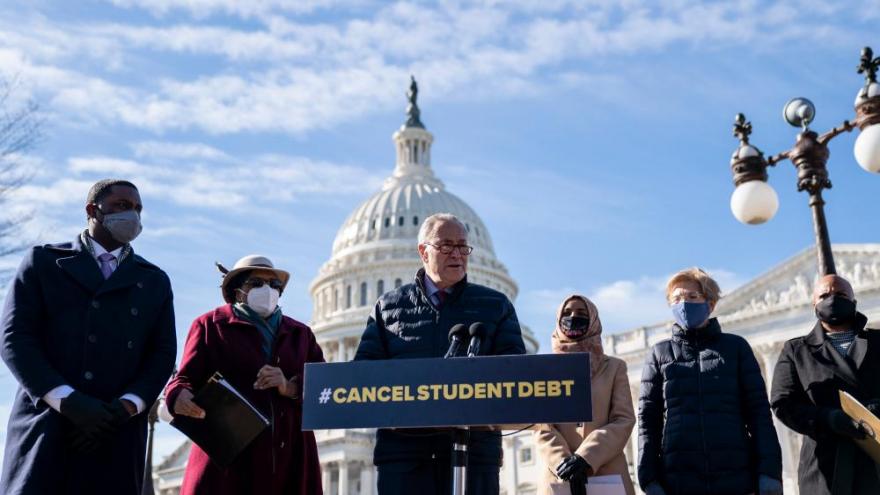 Senate Majority Leader Chuck Schumer of New York and Sen. Elizabeth Warren of Massachusetts led a group of more than 60 other Democrats in asking the President in a letter sent June 23 to push back the restart date for student loan payments, warning it could "create a significant drag on our economic recovery."

Senate Majority Leader Chuck Schumer of New York and Sen. Elizabeth Warren of Massachusetts led a group of more than 60 other Democrats in asking the President in a letter sent Wednesday to push back the restart date, warning it could "create a significant drag on our economic recovery."

As of now, federal student loan borrowers will have to resume payments on October 1 after an unprecedented 19-month suspension.

The freeze was initially put in place by Congress and then extended by both the Trump and Biden administrations.

How much borrowers have saved

Borrowers' balances have effectively been frozen since March 2020. Interest stopped adding up, saving the average borrower about $2,000 over the first 12 months -- and collections on defaulted debt have been on hold.

Biden earlier suspended collections on defaulted student loans made by private lenders, which had previously been excluded from the protection.

The interest pause alone has provided $72 billion in relief.

RELATED: Student loan payments are suspended. Here's how to make the most of it

The benefit is even more significant for those who work in the public sector and may be eligible for loan forgiveness after 10 years. They are receiving credit toward those 10 years of required payments as if they had continued to make them during the pandemic, as long as they are still working full time for qualifying employers.

Both the pause on payments and the interest waiver are automatic but apply only to federally held loans. That covers roughly 85% of all federal student loans, including those known as direct federal loans and PLUS loans that parents have taken out on behalf of their children. It excludes some federal loans that are guaranteed by the government but not technically held by it. Generally, those were disbursed prior to 2010.

Since taking office, Biden has canceled about $1.5 billion in debt for borrowers who were defrauded by their for-profit colleges. The forgiveness process for those borrowers has been in place for years, but cancellations came to a halt during the Trump administration under then-Education Secretary Betsy DeVos, who attempted to change the rule.

But Biden's actions don't go far enough for some of his fellow Democrats, including Schumer and Warren, who have urged him to cancel $50,000 in student debt per borrower.

Biden, who said during the presidential campaign that he would support canceling $10,000 per borrower, has repeatedly resisted the pressure since taking office, arguing that the government shouldn't forgive debt for people who went to "Harvard and Yale and Penn."

As of now, he has directed his education secretary, Miguel Cardona, to write a memo on the executive branch's legal authorities to cancel debt. It would be an unprecedented move, but a memo from lawyers at Harvard's Legal Services Center and its Project on Predatory Student Lending says the Department of Education has the power to do so.

Biden did not include a student debt cancellation provision in his proposed $1.8 trillion American Families Plan, which calls for making community college free and expanding Pell Grants for low-income college students.