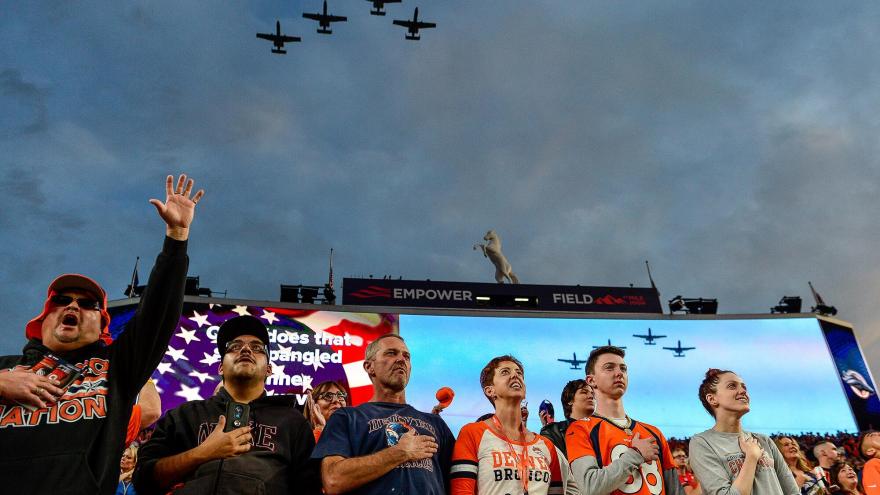 The Denver Broncos will allow a limited number of fans into the stadium starting with the team's second home game.

(CNN) -- The Denver Broncos announced Tuesday that a limited number of fan can attend home games at Empower Field at Mile High beginning with their second home game on September 27.

The Broncos join six other NFL teams that are allowing spectators. Each team has its own capacity limits in place, and some have different start dates for when fans will be allowed into the stadium for games. The other teams are the Cincinnati Bengals, Cleveland Browns, Dallas Cowboys, Indianapolis Colts, Jacksonville Jaguars, Kansas City Chiefs, and Miami Dolphins.

All current Broncos season ticket holders will automatically be entered into a weighted lottery based on priority number for single-game tickets and parking passes with an on-sale date within the next week, according to the team. Seats will be sold online in groups of one to six tickets.

Fans will be separated into sections to limit exposure between fans. The sections will have a maximum of 175 people in accordance with the outdoor event guidance. Each group of fans will be asked to use concession and restroom areas located closest to their section.

Fans will be required to wear masks and practice social distancing while on stadium grounds. No tailgating or congregating will be allowed in parking lots, concourses or the stadium bowl.

The Broncos listed several safety enhancements at the stadium, including mobile/cashless technology, touchless restrooms and improved air purification systems. More than 500 hand sanitizer stations have been installed throughout the stadium as well.

All staff working on game days will go through a health screening (questionnaire and temperature check) and are required to wear personal protective equipment at all times, according to the team.

Unlike the NBA and NHL, the NFL will not be playing inside of a bubble and teams will travel to different cities to play opponents. MLB has already played through a large portion of its regular season, but all games have been played without spectators.

Major League Soccer has returned with teams traveling to host cities to play games. Most games are being played mostly without fans, but some teams, like Dallas and Orlando, are allowing a limited number of spectators if allowed by local regulations.

The Broncos open their season on Monday, September 14, at home against the Tennessee Titans. The team then travels to Pittsburgh on September 20 and then return to play at home before the limited number of fans on September 27.