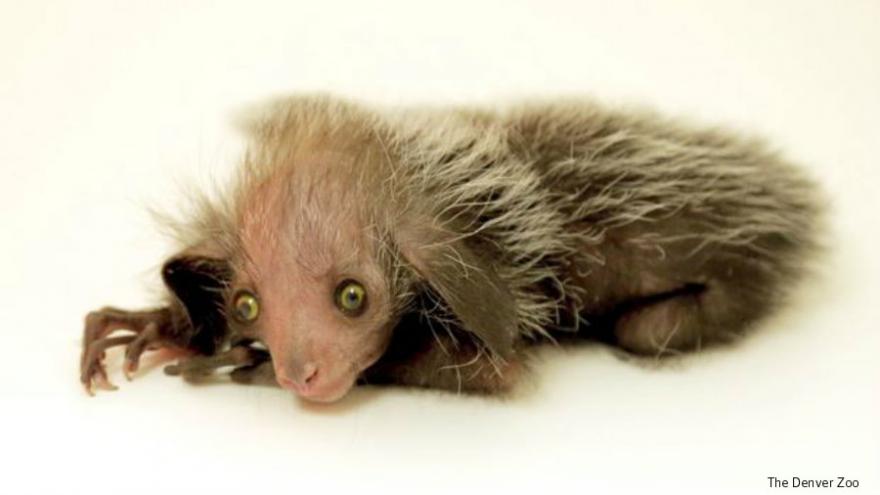 DENVER (KCNC-TV) -- A new baby born at the Denver Zoo is among the rarest — and hardest to see — animals in the world. There are only 24 in seven zoos in the United States — and no one knows how many are living in the wild.

The new baby, named “Tonks”, is an elusive type of nocturnal lemur called an aye-aye. Aye-aye are classified as Endangered on The IUCN Red List of Threatened Species™ and native only to remote parts of Madagascar.

“They are one of the most distinctive looking animals on the planet due to a number of unique adaptations, including coarse dark hair, long bushy tails, rodent-like teeth, piercing eyes and skeletal hands that feature extra-long middle fingers with hooked claws,” zoo officials said in a statement.

Aye-ayes are born weighing just a few ounces and reach up to 5 pounds as adults, according to zoo officials. They can live up to 20 years.

Tonks was born on August 8 to mom Bellatrix and dad Smeagol, officials said.

Despite her some what scraggly appearance, officials say Tonks is healthy and thriving now.

“However, her first days were worrying for Denver Zoo’s animal care staff and veterinarians,” officials said.

“We noticed that Bellatrix wasn’t showing typical mothering behaviors, so we decided to step in to give Tonks some supportive care,” said Lead Primate Keeper Becky Sturges. “We provided 24-hour care for the first week and had to teach Bellatrix how to nurse, but now she is nursing well and Tonks has gained a lot of weight. Now we’re just monitoring them to make sure things continue to go well.”

Tonks is currently in the aye-aye exhibit in Emerald Forest with Bellatrix and Smeagol, but guests shouldn’t expect to see her anytime soon — she’ll remain in her nest box for at least a couple more months before she’s exploring on her own and easily visible.