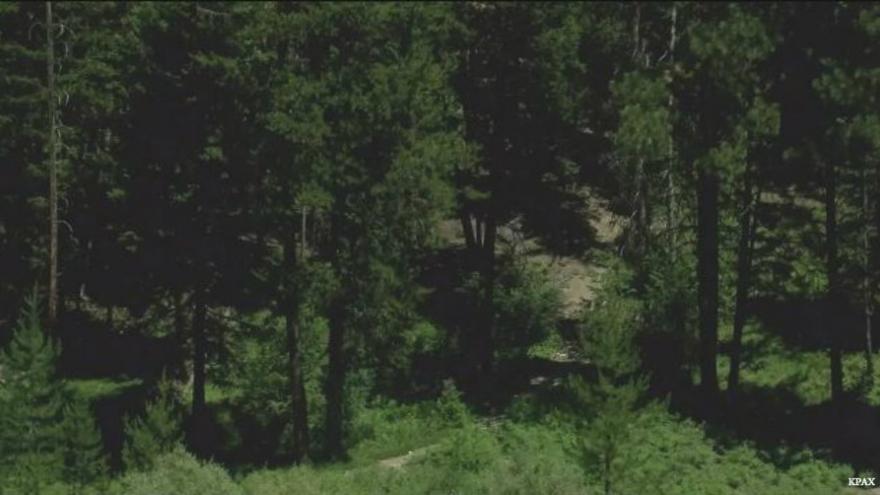 (CNN) -- A sheriff's deputy who found a baby partially buried but alive in the mountains of Montana over the weekend says he lost his composure when he found the infant -- and had just been on the verge of giving up hope the boy could be rescued.

Ross Jessop, a Missoula County sheriff's deputy, was scouring a wooded area in the western part of the state for the 5-month-old boy with other officers early Sunday, after a man told deputies the baby might be buried there.

It is unclear whether the man is related to the child. He was arrested and is accused of two felonies.

By around 2 a.m. Sunday, the officers had been searching for the baby for more than six hours in the cold night in Missoula County.

"All night long, I was preparing myself mentally to find a dead baby. ... I was angry, kind of, at the time," Jessop told HLN's Mike Galanos on Tuesday afternoon. "I was losing my faith ... that the baby was even alive."

On a whim, he said, Jessop and another officer walked uphill from where they had last seen some debris.

When they were about to crest the hill, they paused to tell other officers by radio where they were.

"And during the break in communications, we both heard the small whimpering of a child," Jessop recalled.

The officers found the infant facedown under a pile of sticks and debris, clothed only in a wet and soiled onesie, a statement from the sheriff's office said.

Jessop said he was overcome with joy.

"I was so overcome with emotion that my cop instincts and my cop training ... went away," Jessop said. "I just wrapped that baby up just like a father would any child in need."

"I have three kids myself, and I think without a question that hearing that little baby the other night brought to me more joy than even my own children coming into this world," he said.

The child has minor scrapes and bruises, but is in good condition, according to CNN affiliate KPAX. The baby was placed in the custody of the Montana Child and Family Services Division.

Jessop, at a news conference Tuesday afternoon, said when he picked up the child the baby had a sparkle in his eye. The deputy gave him a few kisses. The child was too fatigued to cry, the deputy said. The baby was cold and seemed distressed so officers draped a coat around him.

"He settled in pretty good. He was coughing a little bit, he actually coughed up a few sticks out of his mouth," Jessop said.

The sheriff's office said it believes the baby had been there for at least nine hours.

The child had been in the care of Francis Carlton Crowley, 32, on Saturday, according to the sheriff's office statement. That night, deputies received calls reporting a man who was acting strangely in the Lolo Hot Springs area.

As deputies headed to the scene, additional calls came in saying the man was threatening people and saying he had a gun, the statement said, and was reaching in his pockets.

Crowley left the area before deputies arrived, but they learned that the baby who was supposed to be with him hadn't been seen for hours, the statement said.

Crowley returned to the hot springs and was apprehended by police, the statement said. As deputies tried to question him, Crowley appeared to be under the influence of drugs and was not making sense to officers, it said.

Crowley made statements to officers saying the baby was possibly buried in the mountains, authorities said.

Crowley has been charged with felony assault of a minor under 36 months and felony criminal endangerment, according to a probable cause affidavit. He was scheduled to appear in court on Tuesday, KPAX reported.

It was not clear if Crowley has been assigned an attorney as of Monday, according to the Missoula County attorney's office.

Crowley is a fugitive from Oregon, according to Dylan Arthur, executive director for the parole board in Oregon. Crowley was under post-prison supervision for several counts of burglary and one count of criminal mischief.