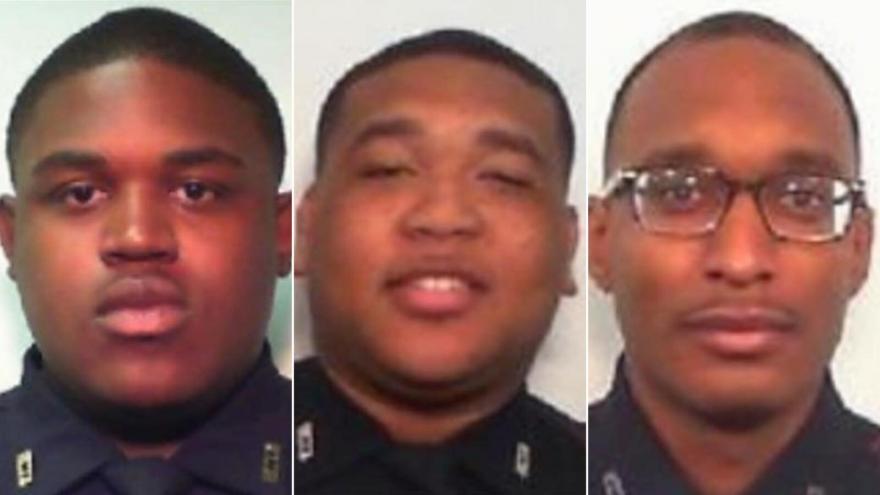 A gunman reportedly "came out of nowhere" and fired on Deputy Kareem Atkins and two other deputies while they were trying to detain someone.

(CNN) -- A Texas deputy who was fatally shot outside a Houston bar had just returned from paternity leave, an official said.

Deputy Kareem Atkins, 30, leaves behind a wife and an infant who's a few months old, said Constable Mark Herman of the Harris County Precinct 4.

A gunman "came out of nowhere" and fired on Atkins and two other deputies while they were trying to detain someone early Saturday. The two deputies -- Darryl Garrett, 28, and Juqaim Barthen, 26, -- were injured, Herman said.

Garrett was in ICU after he was shot in the back and underwent surgery, Herman said in a Facebook post. Barthen rushed to the parking lot to help the other two deputies, and was "immediately shot and immobilized," he added, without going into further detail.

"Deputies Atkins, Garrett, and Barthen are true law enforcement heroes that were cowardly ambushed while serving and protecting their community," Herman said.

The shooting happened around 2:15 a.m., after at least two of the Precinct 4 constable deputies -- working an extra job at 45 Norte Sports Bar -- went outside to address a disturbance, authorities said.

"It turns out it may have been a robbery they were intervening in ... probably unknown to them at the time," Houston police Executive Assistant Chief James Jones said.

While the two deputies were trying to detain a suspect they had on the ground, another person "came from around a car with a rifle and basically shot them right there." The shooter "came out of nowhere," Herman said.

The third deputy "hears gunshots ... runs out there, and when he does, he doesn't even draw a gun -- he's shot," Herman said.

Earlier, Jones, the Houston police official, said all three deputies had been shot from behind.

Investigators are still searching for the shooter, and believe he's a man in his early 20s. "We hope to have a suspect in custody soon," Herman said.