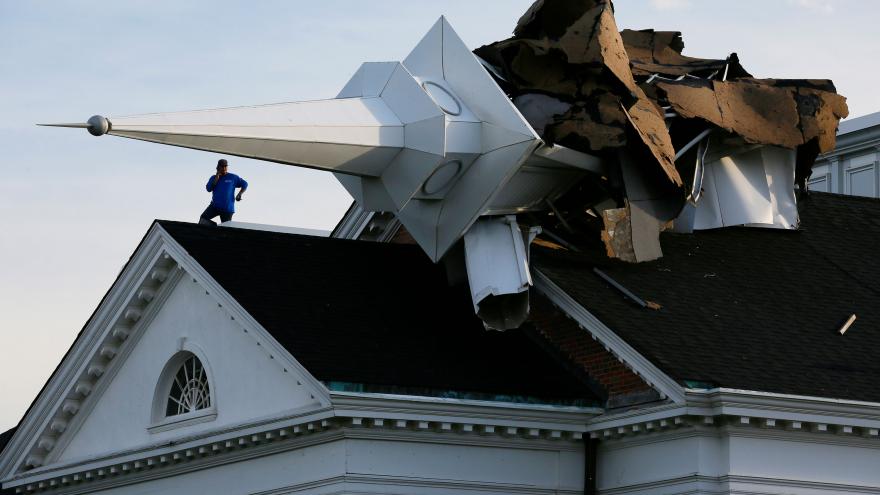 Originally Published: 11 AUG 20 04:25 ET
By Madeline Holcombe and Theresa Waldrop, CNN
(CNN) -- A line of severe storms that ripped through the Midwest, leaving almost 1 million customers without power in Iowa and Illinois alone, dissipated Tuesday as it headed toward the Southeast.

Arkansas and other parts of the Southeast will see showers, but nothing like what the system unleashed Monday. Midway, Iowa, saw gusts of 112 mph, stronger than anything registered during Hurricane Isaias.

Many in Iowa and Illinois woke up Tuesday to widespread wreckage.

The storm flattened cornfields, Jennifer Pickering told CNN. It sounded like a train and felt like it took the breath out of her body, she said.

Boards were blown into her brother's house, where she was staying, she said. Broken windows and howling rain pressurized the home so much they could not open doors, and she found her sister-in-law in bed covered in sheets of broken glass with boards flying around her.

"I honestly thought at times we were going to die," Pickering said.

The storm system is classified as a derecho, and it has far exceeded the criteria of winds in excess of 58 mph and damage spanning at least 250 miles.

Winds reached more than 100 mph as the storms moved through Iowa and Illinois. More than a million customers in the two states were without power Monday night, according to PowerOutages.us. Tens of thousands of outages were also reported in Indiana and Missouri.

A total number of injuries has not been reported, but more than 450 storm reports were made -- 95% of which were wind reports.

Those numbers are expected to go up as the storms, though considerably weakened, push southeast.

Cedar Rapids, Iowa -- where the National Weather Service reported wind gusts over 90 mph -- enacted an overnight curfew because of the damage.

"There is devastating property damage to homes and businesses," the city government wrote in an advisory to residents Monday. "Trees and power lines are down throughout the city, making many major roads impassable."

The curfew will be in place from 10 p.m. to 6 a.m. until further notice, and local transit service in the city has been suspended through Wednesday.

About 50 people were hospitalized with storm-related injuries around Cedar Rapids, according to the police department. Electrocution from downed power lines continues to be the main concern.

The storms are part of what the NWS's Storm Prediction Center called a "particularly dangerous situation."

A derecho can produce destruction similar to that of a tornado, but the damage typically occurs in one direction along a relatively straight swath. The term "straight-line wind damage" sometimes is used to describe derecho damage, the center said.

Toppled power lines sparked numerous fires, the Chicago Fire Department tweeted Monday, and according to a tweet from the NWS in Chicago, power lines blocking roadways, downed trees and debris can be seen across much of northern Illinois.

Outside of Iowa City, a family came to the aid of the driver of a semi truck they said had blown over on Interstate 80.

Michelle Turney, her husband and her son helped the driver out of the truck and kept him in their pickup while they waited for paramedics and police, she said. Her husband kept the man talking to help him relax.