Derecho with 100 mph winds moves across the Midwest, bringing down trees and power lines in Chicago 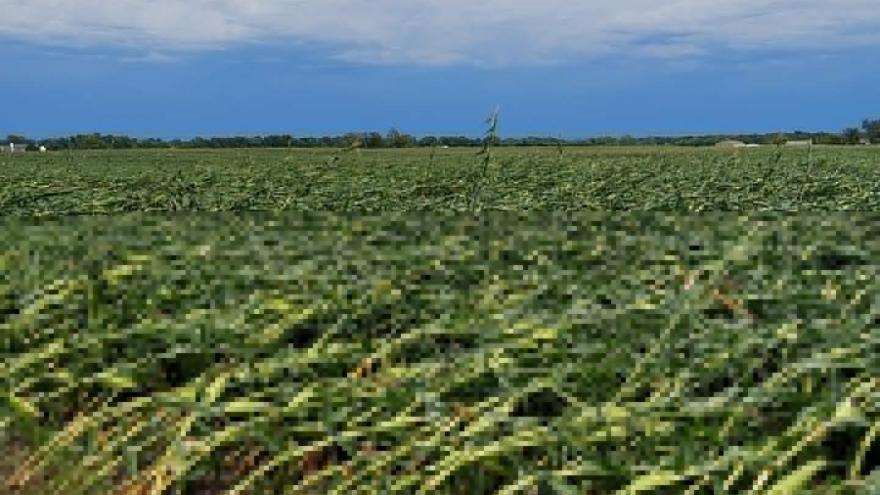 The storms produced winds of more than 100 mph in some cases as they moved through Iowa and Illinois.

"Numerous fires from power lines that have come down and remain energized," the Chicago Fire Department tweeted Monday afternoon.

"Much of northern Illinois has pockets of damage with downed trees, debris, and powerlines blocking roadways," the National Weather Service in Chicago tweeted.

It's unclear whether there were any injuries.

More than a million homes and businesses in the Midwest are without power, including a third of all of customers in Iowa.

The wind was so strong when the storm passed through Perry, Iowa, it blew pieces of boards from other buildings into the walls of a house. The boards narrowly missed people standing inside, Jennifer Pickering, who was at her brother's house when it happened, told CNN.

"It was crazy," Pickering said. There was "so much pressure in the room with the window broken, we couldn't get the door open at times to try and get the dog out. I honestly thought at times we were gonna die."

The severe weather cleared out of Chicago by Monday evening and was stretching from Michigan and Indiana to southern Illinois and eastern Missouri, near St. Louis, CNN meteorologist Taylor Ward said, adding, "The threat will continue to push east, and the storms will slowly ease as we head later into the evening and overnight period."

There were more than 300 severe wind reports -- of gusts more than 58 mph -- by Monday evening, starting in eastern Nebraska on Monday morning and going to Indiana by the evening, according to the Storm Prediction Center, Ward said.

The storms are part of what the National Weather Service's Storm Prediction Center called a "particularly dangerous situation."

Tornado warnings were in effect west and north of Chicago Monday afternoon.

The storms are part of a derecho that was moving out of Iowa into northern Illinois, toward Chicago, and that prompted the Storm Prediction Center to issue a PDS thunderstorm watch through 7 p.m. CT Monday.

A wind gust of 106 mph in Marshall, Iowa, was reported as the storm passed through.

"A derecho producing widespread damaging winds, some of which should be intense, is expected to persist and expand east from Iowa into parts of the Midwest through this evening," the Storm Prediction Center said Monday.

A derecho (pronounced similar to "deh-REY-cho") is a widespread, long-lived wind storm associated with a band of rapidly moving showers or thunderstorms.

A derecho can produce destruction similar to that of a tornado, but the damage typically occurs in one direction along a relatively straight swath. The term "straight-line wind damage" sometimes is used to describe derecho damage, says the SPC.

This storm complex is within the same area that is also under a moderate risk (level 4 of 5) for severe storms. The SPC upgraded this risk level Monday afternoon because of the formation of the derecho. The risk area included over 13 million people.