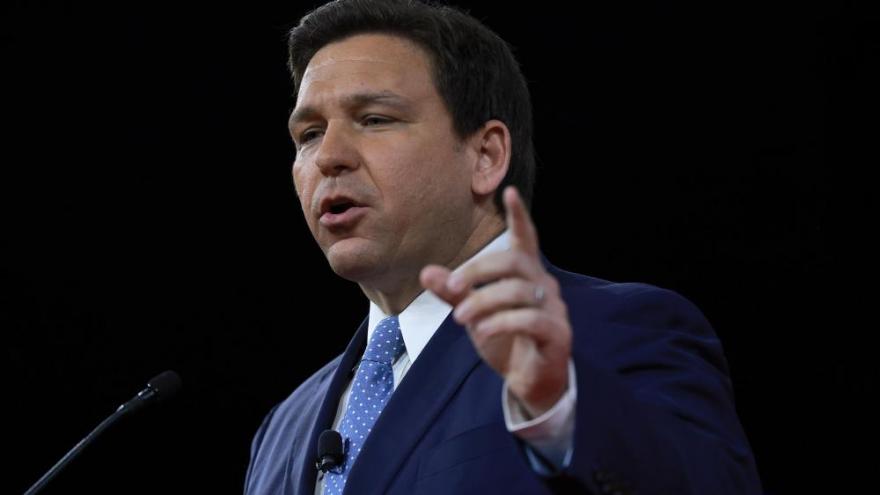 Florida Gov. Ron DeSantis claimed that the NCAA is "perpetuating a fraud" and declared University of Virginia freshman and Florida native Emma Weyant the "rightful winner" of the race.

(CNN) -- Florida Gov. Ron DeSantis waded into fresh controversy on Tuesday with a proclamation honoring the collegiate swimmer who recently placed second to University of Pennsylvania swimmer Lia Thomas, the first transgender athlete to win an NCAA Division I title.

The Republican governor, already embroiled in a fight with Disney over the state's so-called "Don't Say Gay" bill, claimed that the NCAA is "perpetuating a fraud" and declared University of Virginia freshman and Florida native Emma Weyant the "rightful winner" of the race.

Weyant had finished about 1.75 seconds behind Thomas, who has come to personify the ongoing discourse on trans women's participation in sports and the balance between inclusion and fair play.

"The NCAA is basically taking efforts to destroy women's athletics," the Republican governor said in a news conference. "They're trying to undermine the integrity of the competition and crown someone else."

The NCAA currently requires trans women athletes to have one year of hormone replacement therapy (HRT) to be cleared to participate in women's sports. Thomas said she started HRT in May 2019 and came out as trans that fall, and the NCAA has approved her participation in the women's field.

Tuesday's proclamation comes against the backdrop of DeSantis' showdown with Disney over the controversial Florida bill that would ban classroom instruction about sexual orientation and gender identity before fourth grade. A day after Disney CEO Bob Chapek publicly condemned the legislation -- which DeSantis has said he will sign into law -- the Florida governor ripped Disney as a "woke corporation" to a room of supporters.

Unlike past GOP leaders, DeSantis has been unmoved by corporate pressure or threats of economic boycott over divisive policies. Rather, he has gained a national following by leaning into fights, no matter who is on the receiving end -- a strategy that was on full display Tuesday as he entered the debate sparked by Thomas' win in the women's 500-yard freestyle event.

"In Florida, we reject these lies and recognize Sarasota's Emma Weyant as the best women's swimmer in the 500y freestyle," he said in a tweet.

While sex is a category that refers broadly to physiology, a person's gender is an innate sense of identity. The factors that go into determining the sex listed on a birth certificate may include anatomy, genetics and hormones, and there is broad natural variation in each of these categories. For this reason, critics have said the language of "biological sex," as used in DeSantis' proclamation, is overly simplistic and misleading.

A 2017 report in the journal Sports Medicine that reviewed several related studies found "no direct or consistent research" on trans people having an athletic advantage over their cisgender peers, at any state of their transition, and critics say postures like DeSantis' will only add to the discrimination that trans people face, particularly trans youth.

Still, the debate over the inclusion of transgender athletes, particularly women and girls, has become a political flashpoint in recent years, especially among conservatives.

So far this year, Iowa and South Dakota have approved legislation banning transgender women and girls from participating on sports teams consistent with their gender at accredited schools and colleges. And last year, Alabama, Arkansas, Florida, Mississippi, Montana, Tennessee, Texas and West Virginia enacted similar sports bans, infuriating LGBTQ advocates, who argue conservatives are creating an issue where there isn't one.