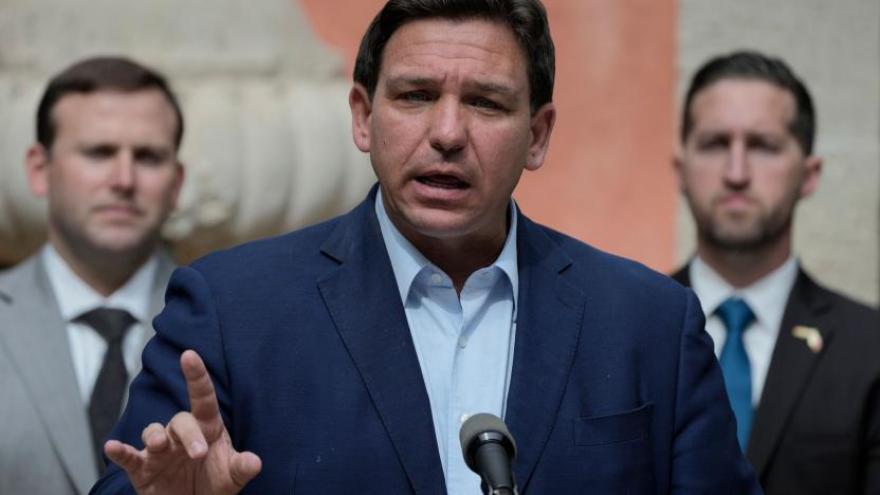 (CNN) -- Florida Gov. Ron DeSantis escalated his weeks-long feud with Disney on Tuesday, challenging lawmakers to eliminate the special status that allows the entertainment company to operate as an independent government around its Orlando-area theme park.

In a bombshell announcement dropped just hours before lawmakers returned to Tallahassee for a special session to finalize new congressional maps, DeSantis changed the agenda for the week to also include a review of "independent special districts that were established prior to November 5, 1968." That would include the Reedy Creek Improvement Act, passed by the Legislature in 1967 to help establish Walt Disney World.

A bill filed by a Republican lawmaker soon after DeSantis' announcement would dissolve Disney's special district on June 1, 2023.

DeSantis also wants lawmakers to eliminate a carve-out for Disney in a state law that allows people to sue Big Tech companies for censorship. A federal judge has blocked the law but Florida is appealing the ruling.

The move against Disney is the latest fallout over a controversial measure that bans schools from teaching young children about sexual orientation or gender identity.

DeSantis, a Republican widely seen as a potential 2024 presidential contender, signed the bill into law in March over the objections of Disney, Florida's largest private employer. Walt Disney Company CEO Bob Chapek announced the company would stop making political donations in Florida after decades of contributing generously, mostly to Republicans, including DeSantis.

After DeSantis' signing, Disney said in a statement that its "goal" was to get the law repealed or see it defeated in the courts.

DeSantis said Disney "crossed the line" with that statement, and suggested in late March that the company's "special privileges" could be lifted. One Republican state representative said a group of Republican lawmakers were meeting to discuss a repeal of the Reedy Creek Improvement Act.

The Reedy Creek Improvement District covers Disney's properties near Orlando, allowing the theme park to manage land within its foundries and provide its own public services, such as fire and police services.

DeSantis announced his move against Disney on Tuesday to a crowd of supporters in The Villages, a sprawling retirement metropolis built by Republican developers in Central Florida that also benefits from a special district.

Disney did not immediately respond to a request for comment.