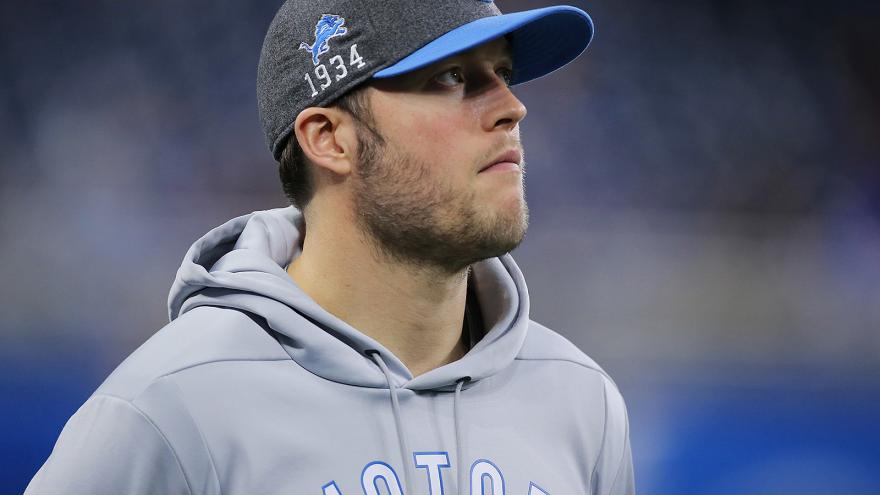 (CNN) -- After a false positive Covid-19 test put Matthew Stafford, quarterback for the Detroit Lions, on the NFL's Injured Reserve/Covid list, life has been terrible. And his wife blames the NFL.

That's according to an Instagram post made by Kelly Stafford, the quarterback's wife, who called the past four days following the false positive "somewhat of a nightmare."

"I have been losing my mind because of how my Family has been treated since my husband was put on COVID-IR," Kelly Stafford wrote. "Even after we knew it was false positive, our school told us they were not allowed back, I was approached in a grocery store and told I was 'endangering others,' my kids were harassed and kicked off a playground, I was told I needed to wait in my car when trying to pick up food, and people closest to us had to get tested just so they could go back to work."

All this, Kelly Stafford says, happened after Saturday, when the Lions placed Matthew Stafford on the league's Reserve/Covid-19 list. The team removed him from the list Tuesday.

The NFL has said being placed on the list doesn't mean the player has Covid-19, just that they may have tested positive or is quarantined after being in contact with an infected person.

But after the family's experience following the false positive test, Kelly Stafford says she wants the league to change -- saying it should be "absolutely positive" a player has Covid-19 before making the news public.

"I don't blame these scenarios on any of the people directly involved.. I understand where they are coming from," she wrote, referring to the treatment her family received. "But I do blame the @NFL. I blame the @NFL for not holding themselves accountable. These are people's lives and livelihoods that are in those results in THEIR test sites. Maybe we should be absolutely positive a person has covid before releasing that info to the world."

Matthew Stafford has not publicly commented on the incident, and the NFL did not immediately respond to a request for comment Tuesday.