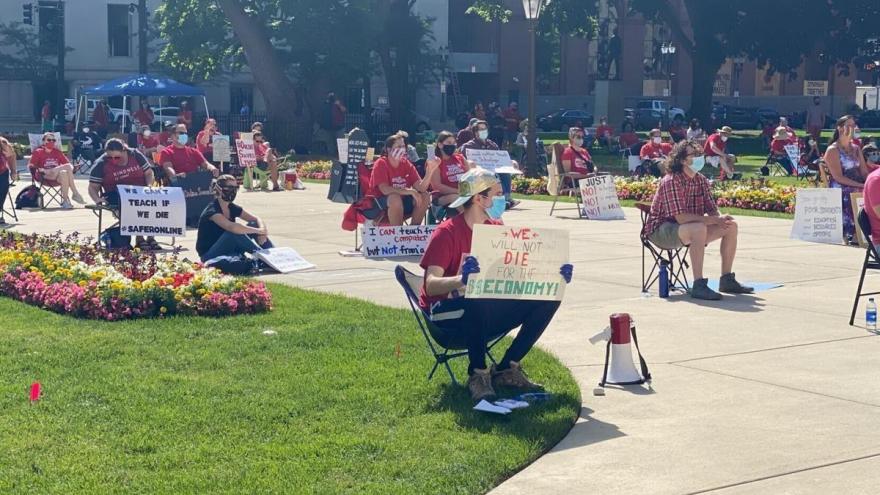 Teachers participate in a rally at the Capitol on August 6, 2020 in Lansing, Michiigan. (File photo)

(CNN) -- The union representing teachers in Detroit has voted in favor of a potential strike to push school officials to make changes to the district's reopening plan.

The Detroit Federation of Teachers, which represents teachers in the Detroit Public Schools Community District, announced Wednesday that 91% of its members voted to authorize the union's leadership to launch a "safety strike" in the future.

Negotiations between the union and Michigan's largest school district began after school officials approved a reopening plan in July.

After it was approved, teachers argued that in-person learning would put their health and their students at risk due to the ongoing coronavirus pandemic.

Terrence Martin, the union's president, said Wednesday in a virtual news conference that more than 80% of his members want to teach only online classes.

Wednesday's vote is not "a work stoppage," the union said in a statement, adding that members have agreed to teach and work remotely.

In a series of tweets on Wednesday, the school district said 75% of its 51,000 students are planning to start the school year completely online while 25% prefer in-person classes.

The district noted in a separate tweet that "Teachers Have Options. No Teacher is Required to Teach Face to Face."

"Conversations with DFT have increased over the past week and we are both bargaining in good faith. The reopening process is very hard, on multiple levels, but we will get this right for our students, families and employees," Vitti had tweeted earlier on Wednesday.

Students are set start the upcoming school year on September 8.