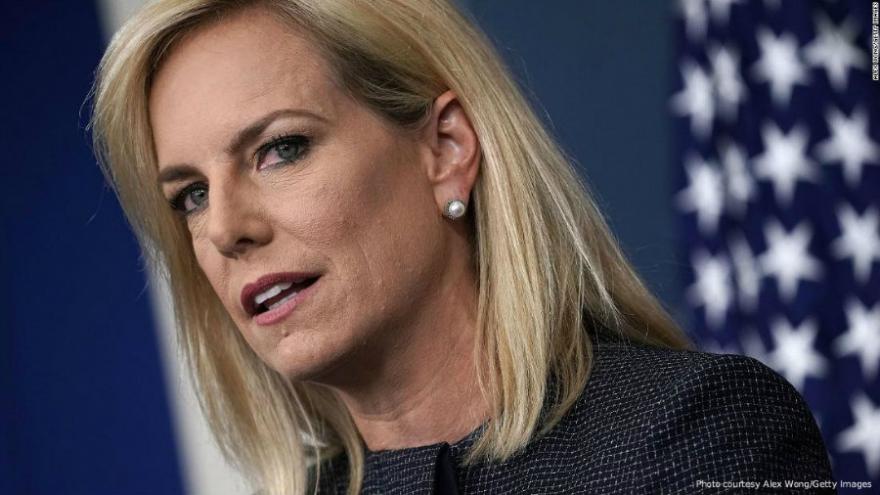 (CNN) -- Homeland Security Secretary Kirstjen Nielsen said Tuesday that the Trump administration plans to comply with and appeal a federal judge's recent decision to temporarily block the government from denying asylum to those who cross the southern border between ports of entry.

"We will follow all laws and judicial rulings, but we will also be appealing it as quickly as possible. I have no doubt that we will be successful," Nielsen said during a news conference on the US-Mexico border in California.

"I am deeply disappointed and troubled by the 9th Circuit ruling yesterday. As we have seen time and time again, these open-border advocacy groups venue here in the 9th Circuit, and obtain temporary injunctions that are far outside the judicial mainstream," Nielsen said, referring to the area where the district court that made the ruling is located.

"Let me be clear: This court, from a chamber in San Francisco, has replaced the President's judgment with regard to the fully delegated authority to determine what is a true national security threat to our nation's sovereignty. This is a dangerous ruling and, given last year's Supreme Court ruling on this issue, will undoubtedly be overturned," she continued.

Monday's court decision came after the Trump administration announced a policy earlier this month barring asylum for immigrants who enter outside a legal checkpoint.

Tigar, whose court resides within the 9th US Circuit Court of Appeals, said the policy '"irreconcilably conflicts" with immigration law and the "expressed intent of Congress."

"We're going to have to look at that," Trump said, adding that "the 9th Circuit is very unfair."

Speaking to the media in California on Tuesday, Nielsen also addressed reports that troops sent to the border earlier this fall will be leaving.

"There's some missions that parts of the military have completed, so what you are seeing is a movement of forces, but as I said earlier, I have spoken with (Defense) Secretary (Jim) Mattis directly and I have no doubt that they will continue to partner with us in this mission until it's resolved," she said.

Asked for clarity on a timetable for the military's completion of their mission on the southern border of the U.S., Nielsen said, "I spoke to Secretary Mattis just this morning. I have no doubt that DoD will continue to be our partners in this mission until it is resolved."

Nielsen, speaking about migrant caravans moving through Mexico, claimed there are more than 6,200 individuals "camped out south of the US border in Tijuana" and more than 3,000 caravan members in Mexicali. Nielsen also claimed that "these two groups, combined with other caravans making their way through the Northern triangle and Mexico will result in approximately 8,000 to 10,000 migrants amassing along our southern border."

Without offering proof, Nielsen claimed that the US "identified over 500 criminals to include known gang members contained in the flow of the caravan," and that caravan organizers "have been pushing women and children to front of the caravan in hope law enforcement will not engage them."

She added, "This is particularly dangerous given the unusual propensity for violence we have seen in this caravan. The assaults on border police in multiple countries and use of incendiary devices. This is not an organic flow of migrants. "