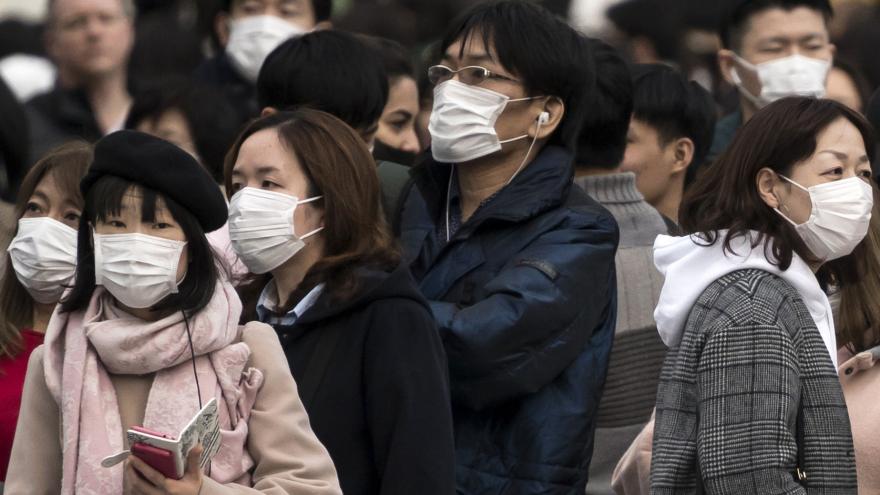 (CNN) -- Passengers who have tested negative for the novel coronavirus began disembarking from the stricken Diamond Princess cruise ship Wednesday, with some expected to transition to shoreside facilities and others to board chartered flights, according to the ship's captain.

These are the first passengers to leave the vessel following a 14-day quarantine period, not including those undergoing treatment on shore for the virus and the more than 300 Americans evacuated over the weekend and now in quarantine at two US bases.

A total of 545 confirmed cases of the virus have been linked to the ship during its quarantine in Tokyo Bay, with 88 new cases confirmed on Tuesday. One new case was confirmed on Wednesday -- a Disaster Medical Assistant Team male doctor in his 30s who went onboard the ship.

Passengers over 70 years old who have tested negative are likely to be the first to exit the ship. The disembarkation will take several days. Once passengers have left the ship, they will not be allowed back on board.

"Well, it goes without saying that after our extended journey together, we will be sad to see many of you go," the ship's captain Stefano Ravera said on Tuesday. "The strength and the togetherness that you have shown over the last few weeks has been incredible."

Japan's efforts to institute quarantine measures aboard the Diamond Princess may have slowed transmission on land, but the disembarkation has sparked wider concerns, with some pointing to a potential breach of public safety as more passengers test positive for coronavirus after leaving the ship.

The US Centers for Disease Control and Prevention (CDC) commended Japan's quarantine measures but said they may not be sufficient to prevent transmission among individuals in the ship.

"The CDC believes the rate of new infections on board, especially among those without symptoms, represents an ongoing risk," it said in a statement released Tuesday.

"To protect the health of the American public, all passengers and crew of the ship have been placed under travel restrictions, preventing them from returning to the US for at least 14 days after they have left the Diamond Princess."

Other experts have also raised the alarm. A Japanese infectious disease specialist who visited the quarantined cruise ship alleged there is inadequate infection control onboard.

"Inside the Diamond Princess, I was was so scared ... there was no way to tell where the virus was ... bureaucrats were in charge of everything," said Kentaro Iwata, an infectious disease specialist at Kobe University in a YouTube video published Tuesday.

Japan has stepped up efforts to contain the spread of the novel coronavirus after an uptick in cases nationwide sparked concern among the public and cast a shadow over the economy and Tokyo's preparations to host the Summer Olympics.

The country's health ministry issued guidelines on Monday for people experiencing symptoms similar to the coronavirus in an effort to to prevent worried citizens from inundating hospitals by providing them with specific hotlines to call.

People who are feeling lethargic, experiencing shortness of breath, or who have had a temperature of 37.5 Celsius or higher for four days should call nationwide healthcare centers that are in charge of responding to the outbreak, the health ministry advises.

A total of 613 cases of the virus, officially called Covid-19, have been confirmed in the country -- the largest outbreak outside China, including the hundreds of cases from the Diamond Princess.

On Friday morning, cases unrelated to the ship stood at 31, but by Wednesday that number had risen to 68 following a spike in cases across the country in the past few days. An elderly woman in Kanagawa prefecture is the only person in Japan to have died of the virus.

The guidance comes as Japanese Prime Minister Shinzo Abe held a meeting with medical experts over the weekend and Japan's health minister warned on Sunday that the nation is "entering a new phase" in the coronavirus outbreak.

"We want to ask the public to avoid non-urgent, non-essential gatherings. We want the elderly and those with pre-existing conditions to avoid crowded places," health minister Katsunobu Kato said Sunday, after a discussion by a panel of experts. They said Japan was still in the early stages of infection.

Kato said that as it would be difficult to track the source of the infections, Japan could see a rise in cases. He stressed that it was important for medical facilities to prepare themselves in advance to tackle a potential spread of the infection in Japan.

The coronavirus has spread from Wuhan, the epicenter of the outbreak in central China, to more than 25 countries, killing 2,005 people and infecting more than 75,000 people.

Face masks have become scarce in Japan since early February. Amid the shortage, an old tweet from the Tokyo police's department's disaster countermeasures division from August 2019 that provides instruction on how to make a DIY mask gained renewed chatter online as people turn to increasingly creative measures to protect themselves.

Japan has already started to take a number of precautions to overcome and prevent the spread of the virus.

Two Japanese airlines -- All Nippon Airways and Japan Airlines -- announced a reduction or suspension of flights to mainland China due to the coronavirus outbreak on February 4.

On Monday, the Japanese Imperial Household announced it would cancel next weekend's public birthday celebration for Emperor Naruhito over fears that large crowds could encourage the spread of coronavirus.

The Tokyo Marathon will also only be open to elite athletes due to public health concerns about the novel coronavirus, according to an announcement by event organizers on Monday. So far, Tokyo 2020 Olympic organizers have asserted the preparations for the Games, which are due to officially begin on Friday, July 24, will continue.

More Japanese companies are adopting the practice of encouraging their employees to work from home to prevent exposing them to the virus on congested public transport and in offices.

Japanese telecoms giant NTT is thelatest to join a slew of firms encouraging their employees to telework in a bid to protect its workers from the virus.

Earlier in February, Japanese e-commerce giant Rakuten told employees who had recently returned from China to work from home for two weeks, according to public broadcaster NHK. The incubation period of the virus is believed to be 14 days.

Amid fears over the coronavirus outbreak, speculation is growing around the affect it will have on Japan's tourism industry and economy.

This year, Japan's popular destinations have seen a slump in tourist numbers as China announced a ban on outbound group travel as part of its battle to stop the spread of the coronavirus outbreak in January.

That particularly affected Japan, which had approximately 9.6 million visitors from China in 2019 -- accounting for a third of foreign tourist expenditure in the country.

Japan has struggled to recover from three recessions in the past eight years. It has also absorbed a sales tax hike and grappled with the aftermath of Typhoon Hagibis, a powerful storm that hit the country last fall.

There are concerns the virus could push the country into another recession.

The world's third-largest economy shrank 1.6% in the fourth quarter of 2019, according to a government estimate released Monday. The decline from the third quarter is the biggest contraction since 2014.