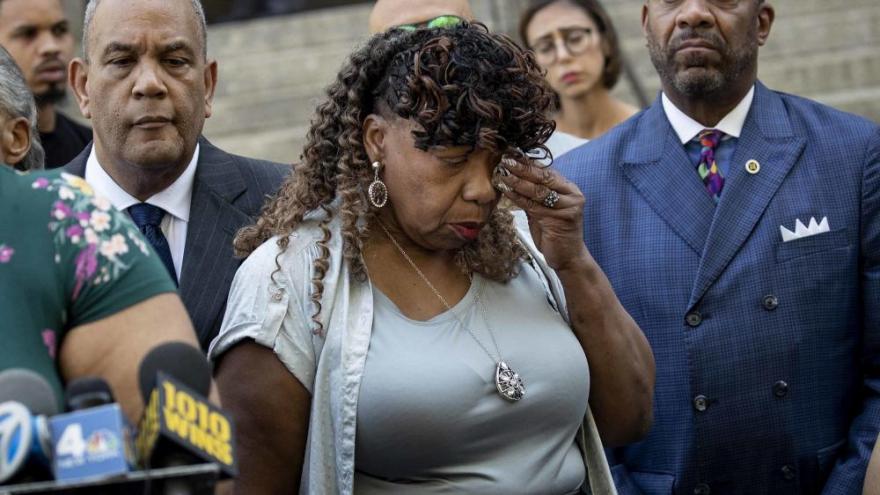 Gwen Carr, mother of the late Eric Garner, after meeting with federal prosecutors who announced last year they would not bring charges against NYPD cop Daniel Pantaleo in the death of her son.

(CNN) -- A review of newly obtained disciplinary records of the former police officer who held Eric Garner in a chokehold before he died shows the officer had seven misconduct cases investigated against him in the five years before Garner's 2014 death.

The release of the records comes on the heels of the New York State legislature repealing a law known as 50-a, which shielded police disciplinary records from being viewed by the public for years.

"I'm so glad for the transparency," Garner's mother, Gwen Carr, told CNN Tuesday. "I just think going forward we shouldn't have to fight and wait five years to get the disciplinary records of the police officers who recklessly kill."

Cellphone video shows Daniel Pantaleo, a White New York Police Department officer, maintaining a chokehold as Garner, who is Black, is taken to the ground in Staten Island, crying out, "I can't breathe." Police were trying to arrest Garner, 43, because he was allegedly selling loose cigarettes illegally.

Pantaleo was never criminally charged in Garner's death. The officer was fired in August 2019 after an administrative judge overseeing a police department disciplinary trial found him guilty of using a chokehold on Garner.

During Pantaleo's trial his disciplinary records were not allowed to be released publicly due to the shield law. The decision made by an NYPD judge in his trial was also sealed because of the law.

One case that the CCRB substantiated was from an incident in 2011 where Pantaleo allegedly abused his power when conducting a vehicle stop and search. It resulted in Pantaleo receiving "instructions" as a penalty, according to the disciplinary record.

Another substantiated case against Pantaleo from 2012 alleged that he abused his power when stopping and searching a person. That case resulted in a departmental disciplinary trial where Pantaleo was found guilty and was penalized by having to forfeit two vacation days, according to the disciplinary record.

CNN has reached out to Pantaleo's attorney for comment on the release of his disciplinary records.

CCRB Chair Fred Davie in a statement to CNN praised grassroots organizations for fighting to change laws to make records like these accessible to the public.

"For too long, New York Civil Rights Law Section 50-a made it virtually impossible for civilians to know anything about NYPD misconduct in their communities," Davie said. "The repeal of 50-a is a major step toward bolstering public confidence in the disciplinary system, allowing for more comprehensive reporting about police misconduct, and ultimately, changing the dynamic between police and civilians for the better."

The disciplinary history that was released to CNN only shows complaints filed to the CCRB. CNN has also requested Pantaleo's full disciplinary history, as well as the NYPD trial judge's full decision in Pantaleo's disciplinary trial, which The New York Times previously obtained. The department has received "a significant number" of requests for disciplinary records, which it now needs to redact as required by the Freedom of Information Law, said NYPD Detective Denise Moroney.

"The Department is making every effort to do this as quickly as possible," Moroney said in a statement to CNN.

Pantaleo filed a lawsuit against the city of New York in 2019 over his firing. His attorney, Stuart London, told CNN at the time of the filing that all of Pantaleo's contact with Garner "were appropriate and taught in the academy."

Carr, who sat through Pantaleo's disciplinary trial, has long decried the lack of transparency in not being able to see the disciplinary history of any of the police officers who were involved in her son's death.

"Immediately after my son was murdered we knew none of this about the officer," Carr said, referring to Pantaleo.

Carr said through the help of police reform advocacy groups she was able to learn about Pantaleo's history piecemeal, as people who had been allegedly abused by him came forward.

Because of what she slowly learned about Pantaleo's history, she pushed for a departmental trial for five years, she said. The city delayed holding a disciplinary trial for Pantaleo while waiting for the Justice Department to make a decision on whether it would charge Pantaleo.

Carr was further emboldened to continue pushing for justice for her son after Pantaleo's disciplinary records were leaked to the progressive news website Think Progress in 2017.

Garner's last words, "I can't breathe," is a phrase that has become a chant protesters use to decry deaths of Black people at the hands of police, including George Floyd, who was seen with a Minneapolis Police officer kneeling on his neck for nearly nine minutes before he died in May. All four former officers involved in Floyd's killing face charges.

And over the weekend, a New York City man appears to have been held in a chokehold by another NYPD officer, who has been suspended without pay. The interaction was caught on video and happened less than two weeks after lawmakers placed chokehold bans at the state and city level.

"Even though we change laws we have to heal hearts and change minds in order for this to work," Carr said. "All the law changing is not going to work unless the superiors hold the officers' feet to the fire and really enforce these laws."