Disneyland reopens after being closed for more than a year 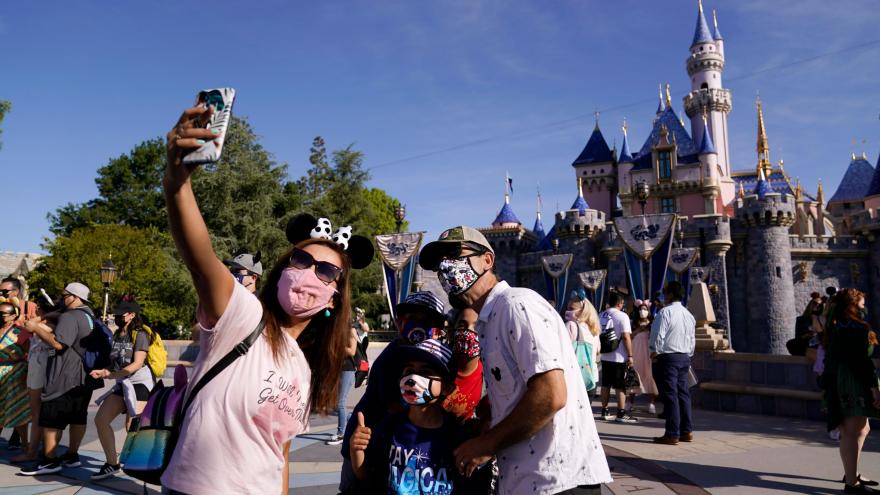 A family takes a photo in front of Sleeping Beauty\'s Castle at Disneyland in Anaheim, Calif. on April 30. The iconic theme park in Southern California that was closed under the state\'s strict virus rules swung open its gates April 30 and some visitors came in cheering and screaming with happiness. - Jae Hong/AP

(CNN) -- Disneyland reopened Friday after being closed for more than a year, but many health safety protocols will continue to be enforced.

The theme park in Anaheim, California closed on March 14, 2020 because of the Covid-19 pandemic and announced its plan to reopen in March 2021.

The park's capacity will be significantly limited to comply with California's health safety requirements and promote social distancing, according to a Disneyland press release. In addition, "Until further clarification from the state, only California residents are allowed to visit the Disneyland Resort theme parks, in groups no larger than three per household," a company press release states. Disneyland is also implementing a new reservation system that requires guests to secure tickets before entering the park.

Although Disney World and other Disney parks have been able to reopen recently, the months of closures led to big layoffs, with the company shedding more than 32,000 employees. Disney's resort unit had employed more than 170,000 workers globally, but the company has not released updated numbers since the layoffs.

Disneyland's unions have pushed California Governor Gavin Newsom to reopen the parks. Earlier this year, a group of California state assembly members also proposed a bill aimed at speeding the reopening of Disneyland and other large theme parks in the state.