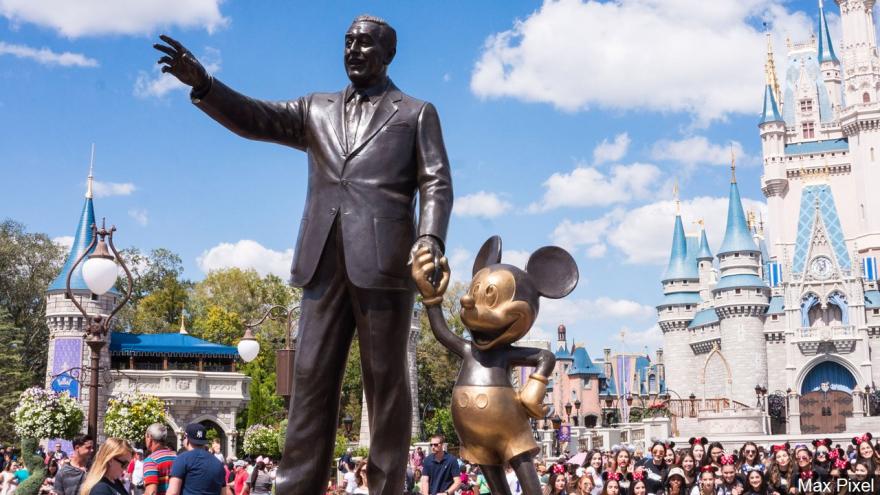 (CNN) -- In a sign that veganism is making its way into the American mainstream, Disney announced Tuesday that plant-based food options will be added to every dining location in their US theme parks.

More than 400 vegan dishes will be available at quick-service and table-service restaurants in Orlando, Florida's Walt Disney World in early October, followed by Anaheim, California's Disneyland in spring 2020.

It's a major undertaking: There are more than 602 places to eat at The Walt Disney World in Orlando and Disneyland Resort in Anaheim, California, most of them uniquely themed to a theme park land or hotel.

Soon each one will have a themed vegan option to match, such as the Star Wars-inspired "Tatooine Two Suns Hummus" in Disney's Hollywood Studios in Orlando, or "Le Fou Festin" at the Be Our Guest Restaurant at Disney's Magic Kingdom, also in Orlando.

The new additions extend beyond park walls: every dining location inside Disney's 36 Orlando and three Anaheim hotels will also get vegan options. They include "Carrot Gnocchi" at The Turf Club Bar and Grill at the Saratoga Springs Resort & Spa and "Cauliflower Tacos" at The Wave of American Flavors at Disney's Contemporary Resort.

From the "Chili-Spiced Crispy Fried Tofu" at Animal Kingdom to "Eggless Florentine" on Main Street U.S.A., Disney is being careful to call the items "plant-based" and not "vegan." That's because the exact definition of what qualifies as vegan has long been a moving target.

To help guests easily spot the plant-based plates, Disney is marking each menu item with a new green leaf logo.

However, the company did say that all of the items "are made without animal meat, dairy, eggs or honey," meeting the broadest definition of vegan cuisine.

There are few places less hospitable for vegans and vegetarians than theme parks, where the standard fare is burgers and dogs. They are among the biggest sellers at Disney World, which serves 10 million burgers, 6 million hot dogs and 1.8 million pounds worth of its iconic turkey legs every year.

The scarcity of plant-based meal options, plus the difficulty in identifying them, has led Disney's vegan fans to create their own online survival guides.

Paris and Hong Kong have plant-based options, too

There are plant-based food options at the international parks, including "Risotto-style Spelt with Mushrooms" at Disneyland Paris, "Pan-fried Vegetables with Plant-based Dumplings" at Hong Kong Disneyland, or "Caramel Mix Nuts Banana Cake" at Shanghai Disney Resort.

But the plan to include a vegan option on every Disney menu is, for now, a US initiative.