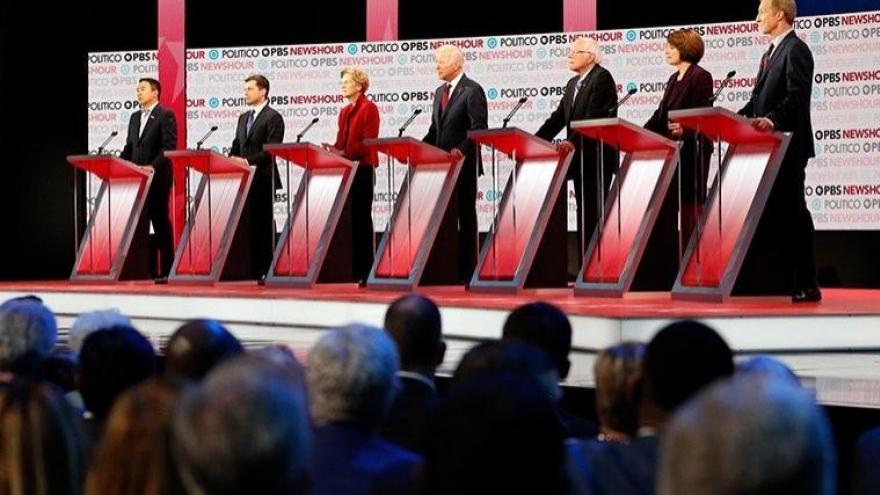 Seven Democrats met onstage December 19, 2019, in Los Angeles for the final debate of the year.

(CNN) -- The Democratic National Committee on Friday raised the bar for presidential candidates to qualify for the January primary debate in Iowa.

In order to participate in the January 14 CNN/Des Moines Register debate, candidates will need to meet one of two polling requirements in addition to a fundraising requirement.

The announcement comes the day after the sixth Democratic debate, which featured the smallest and least diverse field of candidates so far in the race. The DNC has been raising the thresholds for the debates, slowly shrinking the field of Democrats on the high-profile debate stages.

Last week, nine Democratic presidential candidates signed a letter to DNC leaders urging them to consider changing the debate qualifications for the January and February debates in order to increase access to the stage.

The letter argues the increasing thresholds have resulted in candidates -- specifically candidates of color -- being prematurely cut out of the race. The appeal was for the DNC to return to previous criteria that allowed candidates to qualify for the debates by either meeting a polling threshold or a donor threshold.

A spokeswoman for the DNC, Xochitl Hinojosa, said in a statement in response to the letter that the DNC "has led a fair and transparent process and even told campaigns almost a year ago that the qualification criteria would go up later in the year - not one campaign objected."

"The DNC will not change the threshold for any one candidate and will not revert back to two consecutive nights with more than a dozen candidates," Hinojosa said.

Campaigns for New Jersey Sen. Cory Booker, former Housing and Urban Development Secretary Julián Castro and Hawaii Rep. Tulsi Gabbard said they hit the fundraising threshold for the December debate, but did not have the required number of polls to make the stage.