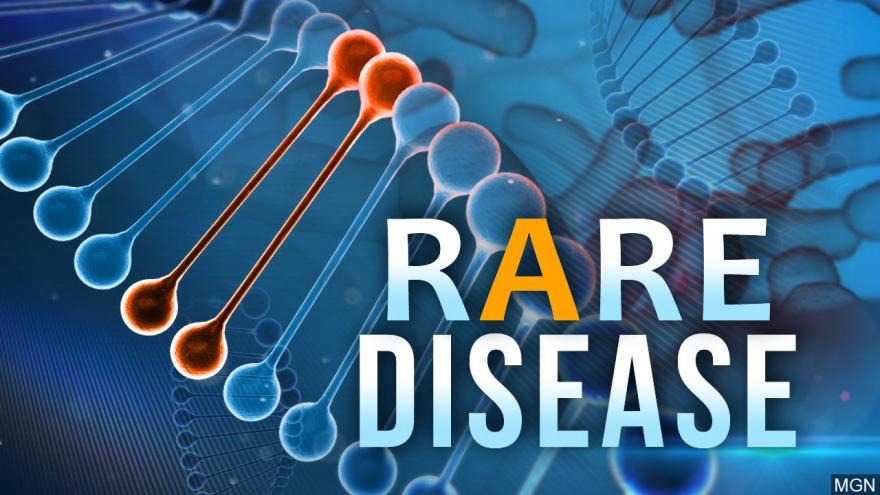 (CNN) -- Dannie Hawkins dreamed for her precious baby nephew, Ja'Ceon Golden, to experience the simple joys of childhood -- swimming in pools during the summer, going to birthday parties, playing in parks filled with people, having a pet -- without risk.

Yet because of his illness, going outdoors and into crowds of people would put him at serious risk of deadly infections, and so Hawkins accepted that as Ja'Ceon's reality -- until now.

Kristin Simpson, as any mother would, wished for her baby son, Omarion Jordan, to grow into a healthy boy who could venture outdoors and not live at risk of getting gravely ill.

Ja'Ceon and Omarion were both diagnosed as infants with a rare genetic disorder called X-linked severe combined immunodeficiency or SCID-X1.

Severe combined immunodeficiency or SCID refers to a group of rare disorders caused by mutations in genes that influence the development and function of important immune cells. Infants born with SCID may appear healthy but are highly susceptible to severe infections -- so much so that a common cold could kill them.

Due to Hollywood's fascination with the disorder, many people might think of SCID as the disease featured in the 1976 John Travolta film "The Boy in the Plastic Bubble" or the 2017 movie "Everything, Everything," featuring Amandla Stenberg.

Yet some common misconceptions about the condition have been portrayed on the big screen, and living in a plastic bubble or locked inside your home -- as in those movies -- has never been a standard treatment for the disease, according to the Immune Deficiency Foundation.

A bone marrow transplant is typically used to treat SCID early in life, before an infection can happen, and transplants in the first three months of life have the highest success rate. Transplants from matched siblings are preferred, but if there is none, a parent or unrelated donor may step in. Although transplants are life-saving, they often only partially restore a patient's immunity.

Now, it turns out that there is another way to treat the disease -- and doctors are calling this new therapy a "cure."

A team led by researchers at St. Jude Children's Research Hospital in Memphis developed an experimental gene therapy that involves harvesting bone marrow stem cells from a child with SCID-X1, inserting the normal gene that is missing in these patients into those cells, and then infusing them back into the child so the cells repopulate and restore the immune system.

It's complicated but raising eyebrows in the medical field.

There are several types of SCID, based on which gene defect is involved; mutations in the IL2RG gene on the X chromosome cause X-linked SCID or SCID-X1, which primarily affects infant boys. The condition probably affects at least 1 in 50,000 to 100,000 newborns, according to the US National Library of Medicine.

If it's left untreated, a child with SCID-X1 rarely would live beyond their 2nd birthday, physicians say. In the United States, all newborns are screened for SCID.

"From a physiological point of view and from a 'quality of life' for these patients, this is a cure. The question will become, will it be a durable cure? Will it last 10, 20, 50 years for these children? And only time will tell," Dr. James Downing, president and CEO of St. Jude Children's Research Hospital, said Tuesday.

"This is the first time we've seen a total reconstitution of the immune system, which has provided the ability for these children to get out of isolation," he said. "So we're comfortable, I think, at this point stating that this is a cure. Only time will say will this be a durable, lifelong cure."

The newly developed gene therapy, performed in combination with a chemotherapy called busulfan, was described in a study published in the New England Journal of Medicine on Wednesday.

Both Ja'Ceon and Omarion participated in a clinical trial to test the therapy, and it proved successful in treating SCID-X1 in both.

"The kids are cured because, for the first time, we were able to restore all three types of cells that constitute the full immune system," Dr. Ewelina Mamcarz, first author of the study and a researcher at St. Jude, said Tuesday.

The treatment restored healthy functioning in diverse groups of immune cells, including T cells, B cells and NK cells.

"We will continue to follow these patients, but the results are just that these patients have full immune restoration with no immediate side effects," Mamcarz said.

"Because this therapy is still in the early phases of development, it's too early to estimate the overall cost, but we want it to be accessible to any and every child who needs it," she said. "Most patients require just one infusion, and because we were able to restore fully their immune system, they did not require any additional therapies, like in transplant."

When Ja'Ceon Golden was born in New Mexico in 2016, he never had the chance to go home from the hospital. His newborn screening tests showed that he had SCID-X1. When doctors told his aunt, Dannie Hawkins, about his test results, she didn't know what to think.

"I was like, 'Well, what's that?' And their answer to me was, 'Well, did you ever see the movie "The Boy in the Bubble"? And I was like, 'yes,' and they said, 'well, that's what he has.' At that moment, all kinds of things were going through my mind," Hawkins told CNN exclusively.

Hawkins, Ja'Ceon's guardian, learned more about the disorder and how to care for Ja'Ceon while he stayed in the hospital, including constantly washing her hands so as to not expose him to germs, and heating water before his baths so that the water was sterile.

Doctors then told Hawkins that she could travel to San Francisco to receive treatment for Ja'Ceon, and she was informed about the study for the new gene therapy.

In 2017, while in San Francisco, Ja'Ceon was treated for his disease. As soon as Hawkins heard that the treatment had been successful, she took Ja'Ceon outside for the first time.

"That was pretty neat, to see him smile and look, because all he could do was see the cars out the window and stuff like that, because I would put him to the hospital window so he could see people walk and cars go by," she said. "Just to see him look at the cars and just smile, it was a blessing."

In the days following, Hawkins still was nervous about whether her nephew's immune system was completely restored.

"I still had that fear of, 'what if he gets sick?' You know, because he had never been out of the hospital before," she said.

Then, "we went to a Giants game, and his immune system was able to handle that, with all of the people that were there, and that's when I realized it worked," she said.

At the game, Hawkins took Ja'Ceon, who is a baseball fan, to meet Barry Bonds, a former star player for the San Francisco Giants. Other than Hawkins and a medical professional, he was the first person to hold Ja'Ceon.

"He never knew Ja'Ceon's condition because it's not something I talked to him about, but he got to hold him, and we took pictures," Hawkins said. "That was the third day out of the hospital."

As for Omarion Jordan, he is now a Goldfish cracker-loving, joyful and healthy toddler -- but that was not always the case.

When Omarion was born almost a year ago in Indiana, the state did not test newborns for SCID, and his family was unaware of his condition. As an infant, he often faced health problems such as rashes or scaly patches on his skin, but no one knew why.

"They were kind of guessing what was wrong, like they were telling me he had cradle cap; he had eczema; he had a milk allergy," said his mother, Kristin Simpson.

"I just felt like nobody was taking me seriously at all and that it was way more serious than anybody was letting it out to be," she said.

One day, Simpson had enough. She took her son to see his primary care pediatrician, who then sent Omarion to a nearby hospital.

At the hospital, "they said he had pneumonia, he had a viral infection, he was running a fever, he was having a hard time breathing, and they just kept doing more and more tests," Simpson said. "Then I remember them telling me that he had X-related SCID."

Omarion was about 3 months old, and Simpson had never heard of the disorder.

Once Omarion was diagnosed, Simpson and his doctors made efforts to not expose him to any germs, and he was kept from going outdoors for months. Then he was enrolled in the study for the new gene therapy.

Afterward, Simpson was told that her son had been successfully treated.

"Going into this, I honestly was expecting the worst," she said.

"I was really praying for a miracle, and I think that's what happened. I don't think it's anything short of a miracle," she said. "As soon as we found out that he was healed, he was actually taking a nap, and we woke him up to take him outside, and then we were just outside all day until he fell asleep."

Ja'Ceon and Omarion were two of eight infant patients who were involved in the new study. The patients, who were an average age of 3½ months old and newly diagnosed with SCID-X1, were treated with the gene therapy.

The therapy involved collecting stem cells from their bone marrow and then using a virus as a vector to insert a healthy copy of the IL2RG gene into the patients' cells before infusing those cells back into their bodies. "The process takes approximately 10 days," she said.

"Prior to the gene-corrected blood stem cells being infused back into patients, the infants received two days of low-dose busulfan, which was a chemotherapy agent most commonly used in bone marrow transplantation, to make space in the marrow for donor stem cells to grow. The outcome has been truly outstanding for our patients," Mamcarz said.

The vector used in the therapy was an engineered copy of the human immunodeficiency virus, or HIV, but the patients "can't get infected with HIV," said Dr. Morton Cowan, a pediatrician at the University of California, San Francisco, who was an author of the study. "It originated as HIV, but it's really no longer HIV when it's inserted," he said. The virus was engineered so that its active parts were removed, making it safe to use.

"This virus is able to effectively deliver the healthy copy of the gene into the stem cells in a way that was not possible before. We believe that this type of virus is safer and more effective for gene therapy," Dr. Stephen Gottschalk, chair of the Department of Bone Marrow Transplantation & Cellular Therapy at St. Jude Children's Research Hospital and an author of the study, said Tuesday.

Such gene therapies also can come with a risk of cancer, since delivering the IL2RG gene into a patient's cells could affect adjacent genes, but Gottschalk said that the HIV vector was engineered to include insulators that block the activation of surrounding genes.

"The goal is to prevent gene therapy from unintentionally causing leukemia," he said.

All of the patients survived treatment and were doing well by an average of 16.4 months after treatment, according to the study, but more research is needed to determine whether the effects will continue as the patients grow older.

The researchers are investigating how this gene therapy could be used to treat patients of older ages and withother types of disease.

For instance, "the same vector that was manufactured here at St. Jude is currently being used at National Institutes of Health to treat older children who had an unsuccessful bone marrow transplant," Mamcarz said.

"We are exploring other immunodeficiencies, but also this vector could be potentially used to treat sickle cell disease, which is a life-threatening blood disorder that is very common worldwide," she said.