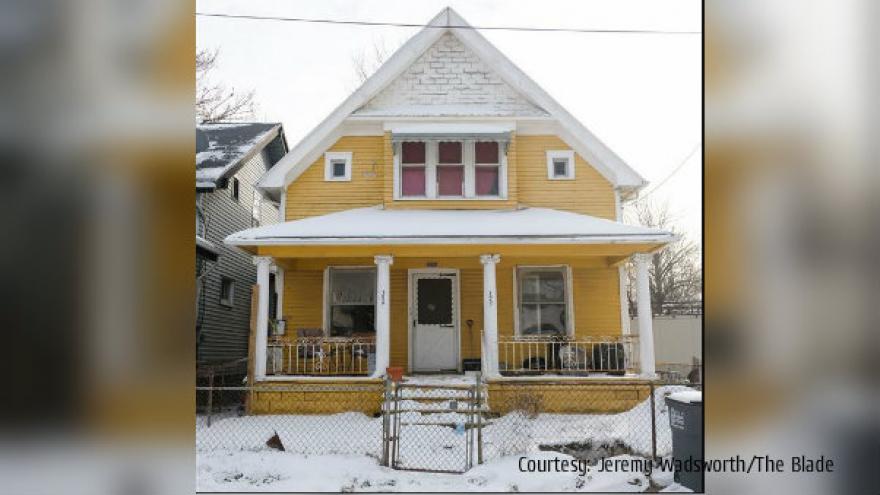 Toledo, Ohio -- The Toledo Area Humane Society is investigating the death of a dog in central Toledo that was found outside and “frozen solid.”

The female dog had died after curling up on the front porch of a house in the 1000 block of King Street.

“I don’t know how long she was out there,” Megan Brown, a cruelty investigator with the humane society, said. “She was frozen solid.”

Ms. Brown said an underweight male dog was inside the house. She saw him through a window and seized him that afternoon after obtaining a search warrant.

“He was visibly shivering,” Ms. Brown said, adding that his ribs and spine are prominent and the house was very cold.

Contacted by The Blade on Thursday afternoon, Victor Vallejo Sr., 40, said the dogs are his and added he was unaware of any issues. He said he last saw them two or three days ago and left them both inside. The utilities to the house were recently shut off, he said.

“I wasn’t staying there, but I was going back and forth and feeding them. They had plenty of food and water,” he said. “I’ve been staying here and there at the moment. I kind of fell on some bad times.”

He said both are American bullies. The 3-year-old female was named Nanas, while the 4-year-old male is Haze. He said he loves his dogs, paid a lot of money for them, and intended to breed them.

Mr. Vallejo said he isn’t sure how Nanas got outside.

“I don’t know how they would have got out,” he said. “Everything was locked up tight.”

Ms. Brown said neither dog had any food or water, and Nanas was in the fenced front yard. There were blankets and a pillow on the porch, which had a roof, but no shelter from the bitter temperatures.

“She didn’t appear to be in poor health, but it’s hard to tell when she’s curled up and frozen,” Ms. Brown said.

Mr. Vallejo said Nanas had gotten loose in August. Records from the Lucas County Canine Care & Control show she was taken to the county shelter by a citizen Sept. 21 as a stray. An initial medical evaluation there noted Nanas had fleas and swollen ears but seemed otherwise healthy. Mr. Vallejo reclaimed her the following day and purchased a 2017 license for her.

Mr. Vallejo said when he got her back, she had lost weight and was sick. He said he hadn’t yet been able to get her back to full health.

Nanas was seen by a canine control officer Oct. 22 running loose on King Street, but Mr. Vallejo contained her while the officer was there. He was cited for a dog running at large and has a bench warrant from Toledo Municipal Court for failing to appear for a hearing on the citation.

Ms. Brown said other than being underweight, Haze appears OK.

“He looks to be pretty good,” Ms. Brown said. “He’s sweet. He was malnourished and dehydrated, but I think he’ll be fine.”