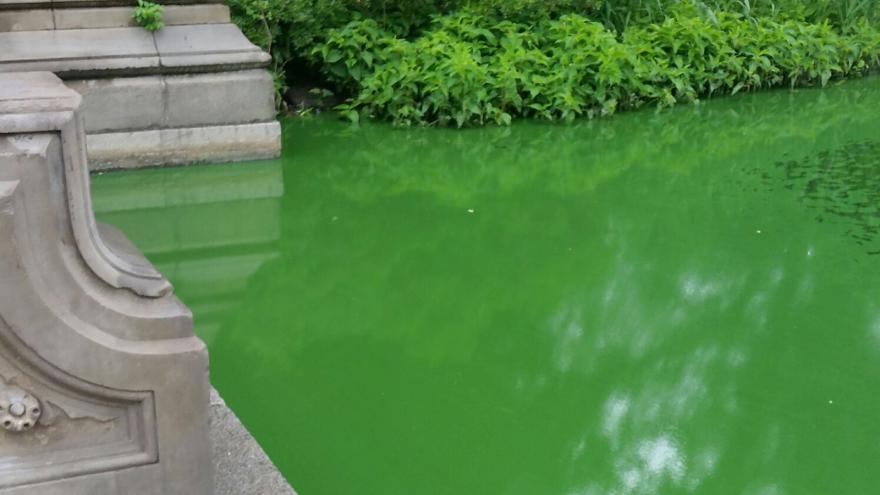 (CNN) -- As summer temperatures finally begin to cool, weary New Yorkers flock to city parks and find themselves drawn, irresistibly, to the many tranquil ponds and pools of water. Beautiful, certainly, but in some cases deadly.

Green-blue blooms of toxic algae have been discovered in three New York City parks this past month posing a threat to young children and pets, according to a state environmental website.

In Manhattan, residents are warned against the waters of Turtle Pond and Harlem Meer in Central Park as well as the pond in Morningside Park. In Brooklyn, officials caution residents to avoid the large pond in Prospect Park, though Prospect Park Dog Beach is safe for dogs wishing to splash and play and so remains open.

Known as cyanobacteria, these "primitive" photosynthetic organisms can feed off the sun to make their own energy and release oxygen and possibly toxins in the process, said David G. Schmale III, a professor at Virginia Tech.

Algae occurs naturally in water, both fresh and marine water.

However, some species produce potent toxins that can sicken or even kill people, pets and wildlife, according to the US Environmental Protection Agency. Blue-green algae and other HABs can produce different types of poisons, some that affect the liver, others the brain.

Symptoms usually arise anywhere from 15 minutes to several days after exposure and include diarrhea or vomiting, weakness or staggering, drooling, difficulty breathing and convulsions or seizures, the EPA reports. You should immediately take a pet to a vet if you see these symptoms.

Sometimes they look like foam, scum, or mats on the surface of water, Schmale explained. In some cases the harmful algae, which can be blue, vibrant green, brown or red, are mistaken for paint floating on the water.

Toxic algae frequently stink and in some cases produce a nauseating smell, yet animals may be attracted to the smell and taste of them, according to the EPA.

In particular, dogs are especially vulnerable when toxic algae contaminates water because of their tendency to drink where they play or lick their wet fur. Even dogs who avoid water may scavenge the shore where they may find -- and eat -- drying clumps of algae.

If your dog has already gotten into a harmful bloom, rinse your pet off immediately in fresh, clean water. Remember to wear gloves to protect yourself. And, if you know you've been in contact with the bloom, immediately wash with soap and water.

New York City is not alone in facing this toxic threat.

Poisonous blooms of algae have been observed in all 50 states -- in large freshwater lakes, smaller inland lakes, rivers, reservoirs and marine coastal areas and estuaries, according to Schmale.

Earlier this summer, three dogs died after frolicking in a pond in Wilmington, North Carolina, while another mutt succumbed after a swim in Lake Allatoona, Georgia. The four animals all died of the same cause: liver failure brought on by ingesting water contaminated with toxic blue-green algae.