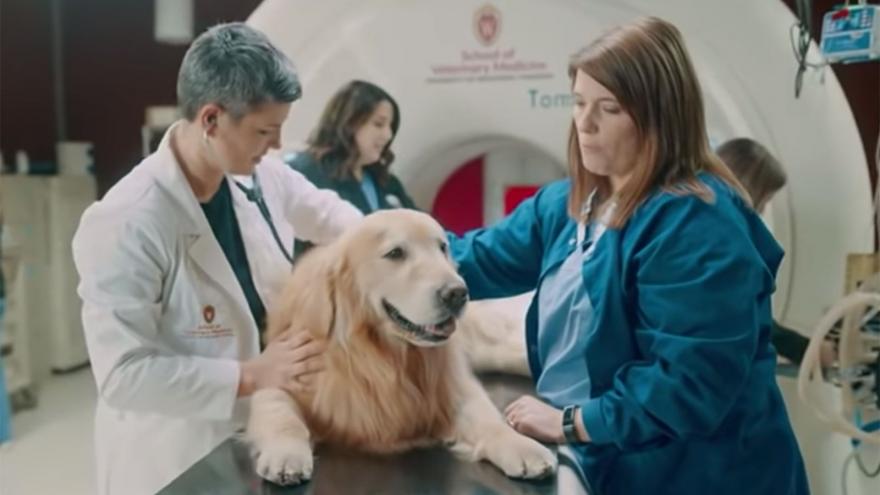 The advertisement features Scout, the cancer-beating dog. Its goal is to raise money for the University of Wisconsin School of Veterinary Medicine, which administered Scout\'s chemotherapy and radiation treatments. Credit: WeatherTech
By Leah Asmelash, CNN

(CNN) -- While tuned into the Super Bowl this Sunday, you might see an ad for veterinary research featuring a very, very good boy. That's Scout, and here's his story.

David MacNeil, CEO of car accessory manufacturer WeatherTech, found out that his golden retriever -- Scout -- had a tumor on his heart last summer. The 7-year-old dog was diagnosed with cancer in his blood vessel walls, CNN affiliate WMTV reported, and had a 1% chance of survival.

"There he was in this little room, standing in the corner," MacNeil told WMTV. "He's wagging his tail at me. I'm like, 'I'm not putting that dog down. There's just absolutely no way.'"

So MacNeil took Scout to the University of Wisconsin School of Veterinary Medicine, where the team put him through chemotherapy and radiation to attack his tumor.

Now, that tumor is almost gone.

MacNeil was so happy about the result, he wanted to let everyone know -- and raise awareness about cancer in dogs.

So, the CEO bought a $6 million advertisement that's set to air during the Super Bowl.

The 30-second ad features Scout going through treatment and running through the WeatherTech facilities. At the end, viewers are shown a link where they can donate to UW's veterinary school.

When asked by WMTV why he didn't donate money directly to the school, MacNeil said he wants viewers to show their support through donations.

Mark Markel, dean of the School of Veterinary Medicine, praised the advertisement.

"This is an amazing opportunity not only for the University of Wisconsin-Madison and the School of Veterinary Medicine, but for veterinary medicine worldwide," Markel told WMTV. "We're thrilled to share with Super Bowl viewers how our profession benefits beloved animals like Scout and helps people, too."