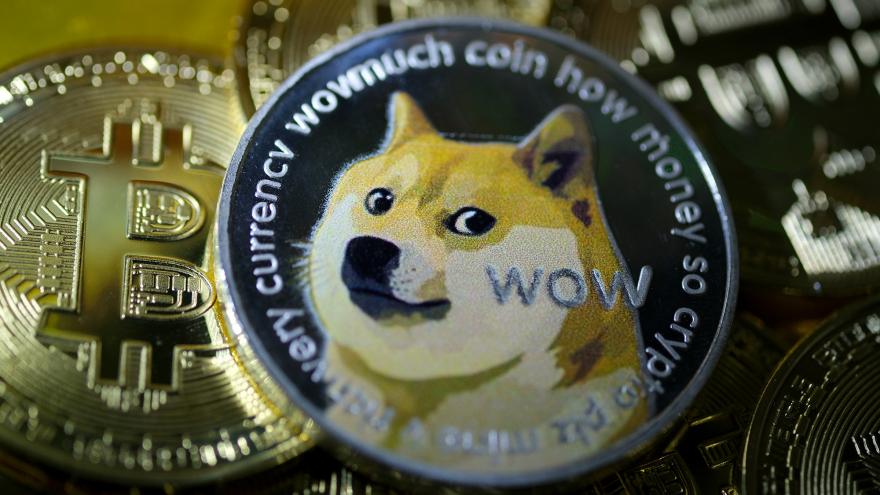 Robinhood is having to explain why users faced issues trading a popular asset, Dogecoin, a cryptocurrency on its platform. - Yuriko Nakao/Getty Images

(CNN) -- Robinhood is again having to explain why users faced issues trading a popular asset on its platform this week.

This time, the asset in question is Dogecoin: a cryptocurrency (which was created as a joke in 2013) popular among Redditors and with Tesla CEO Elon Musk that surged to all-time highs this week.

Late Thursday, as Dogecoin rallied past 25 cents for the first time, high demand put "extreme pressure" on Robinhood's crypto trading systems, the company said in a blog post Friday. As the platform was processing orders, "one of our systems failed, which brought down our crypto order system." Within an hour, the system had recovered save for some "intermittent issues," and everything was fixed within two hours, Robinhood said.

But more investors wanted in, and the crypto kept climbing Friday, hitting an all-time high above 40 cents. That caused Robinhood to experience further "sporadic crypto order failures and delayed notification for some customers," it said.

Dogecoin is up around 468% since last Friday and more than 6,000% since the start of the year, according to CoinMarketCap. On Friday, trading volume of the asset rose nearly 300%.

The issues prompted swift backlash from Robinhood users, reigniting concerns about retail investors' access to equity markets. In late January, Robinhood was criticized for temporarily restricting buying of GameStop and other "meme stocks" during a Reddit-fueled trading frenzy (though the reason behind those restrictions was different from the Dogecoin issues).

"Robinhood is trying to slow the #dogecoin community down [shake my head]," one user tweeted Thursday evening, along with a screenshot that appeared to be from the Robinhood platform saying "Dogecoin trades may not execute right now."

Another wrote: "Robinhood is doing that thing again where they keep normal everyday people from becoming millionaires," another person said on Twitter of the trading issues.

The Dogecoin drama is just the latest PR headache for Robinhood, which is being sued by Massachusetts securities regulators who say the platform has failed to protect its system from outages and disruptions, among other claims. In response, Robinhood has defended efforts to bolster its system.

Robinhood sought to reassure customers in its Friday blog post, but it also warned that more issues could arise.

"As one of the few platforms where customers can purchase Dogecoin, our platform is right at the center of this surge," Robinhood said, adding that it rose to the top of the Apple App Store's top free apps list Friday. "Our teams are working around the clock to provide you with the highest level of service possible, and as interest in crypto continues over the weekend, we may continue to see intermittent service interruptions."