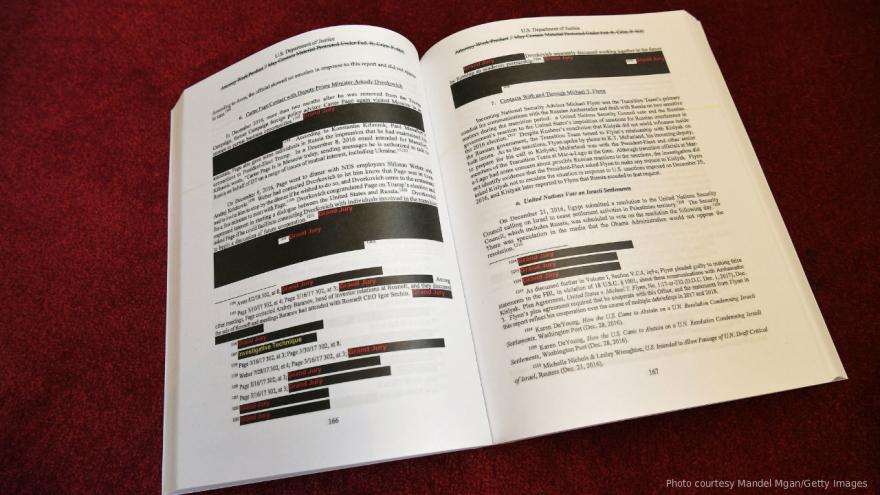 (CNN) -- The Justice Department said Tuesday it agrees that a federal court in Washington can make public lists describing potentially hundreds of miscellaneous court actions, like search warrants, used in the Mueller investigation.

The department asked for three weeks to make redactions on "a few entries" because of ongoing law enforcement efforts, and a judge said she would give the agency that time.

CNN had asked the court to make the lists public. The unsealing would not necessarily reveal the details of the court filings, but instead give the public a broader overview of how, when and for what Mueller was going to the federal court to gather evidence.

Mueller said in his final report that his team had received almost 800 search, seizure and communications warrants from federal courts in the investigation, yet his office wouldn't give more detail. It's still unknown exactly how many of those were approved by judges in federal court in DC.

Chief Judge Beryl Howell of the DC District Court has shown the government three lists of unknown length that give limited information about these matters. It is possible that the lists will reveal how often Mueller approached technology and communications companies for access to information -- with the targets of many of the warrants not named in these lists.

"The government has reviewed the sealed lists of docket information filed on this docket by the Court, and expects to have no objection to the public release of the vast majority of that information," wrote the US Attorney's Office in DC, which has taken over several of the cases opened by Mueller.

"However, there are a few entries on the lists that the government may request be redacted from a public release to protect ongoing law enforcement interests. Accordingly, the government respectfully requests that the Court permit the government to propose a very limited set of redactions to the sealed lists of docket information on or before June 18, 2019."

So far, some search warrants used in Paul Manafort's and Michael Cohen's cases have been made public by federal judges after other requests from CNN and other news outlets.