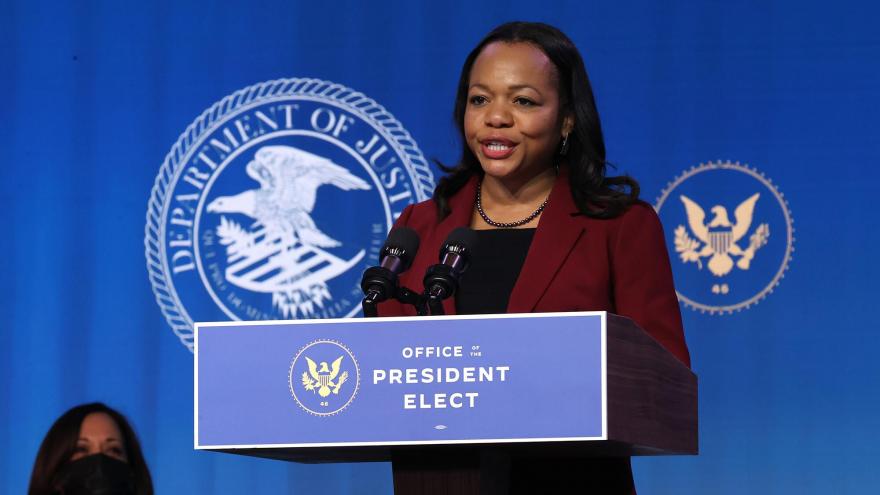 Kristen Clarke, President Joe Biden's nominee to lead the Justice Department's Civil Rights Division, heads to her Senate confirmation hearing on April 14 as a groundswell of supporters says there's an urgency for Clarke to take office and lead the team of federal prosecutors to address recent allegations of unconstitutional acts across the country, including police killings of unarmed people of color.

(CNN) -- Kristen Clarke, President Joe Biden's nominee to lead the Justice Department's Civil Rights Division, heads to her Senate confirmation hearing on Wednesday as a groundswell of supporters says there's an urgency for Clarke to take office and lead the team of federal prosecutors to address recent allegations of unconstitutional acts across the country, including police killings of unarmed people of color.

If Clarke, 45, is confirmed, she would be the first Black woman to lead this division since its inception in 1957.

But Clarke will first have to make it through Wednesday's Judiciary Committee hearing, which could be filled with questions from members that could resurface controversial moments that go back as far as her undergraduate years at Harvard University where she co-authored an article that compared the genetics of Blacks and Whites and as the leader of Harvard's Black Students' Association where she invited an anti-Semitic author for a speaking engagement.

Clarke reportedly confronted both situations over 25 years ago by apologizing for giving the author a platform and explained after the article published that she did not share those views. But, in recent months when right-wing news outlets resurfaced the article to denounce her nomination, she has met with several Jewish organizations and reiterated to the Union of Reform Judaism that "she erred" in her decisions.

A possible attack on Clarke's past -- that has nothing to do with her body of work as a professional -- comes after Vanita Gupta, Biden's nominee for associate attorney general, was grilled by Republican senators during her confirmation hearing about her social media on defunding the police and an op-ed she wrote in 2012 about decriminalizing drugs. Gupta apologized to the senators and clarified her stance on only decriminalizing marijuana.

Clarke may also get questioned by gun-rights advocates on the committee like Texas Sen. Ted Cruz, a Republican, for a July 2019 social media posts in which she praised the late Justice John Paul Stevens' stance on repealing the Second Amendment. Connecticut Sen. Chris Coons, a Democrat, is planning to ask Clarke about her record working in and with law enforcement, and the support she has earned from members and groups within the law enforcement community, a spokeswoman for the Senator told CNN.

Nonetheless, Dwayne Crawford, the executive director of the National Organization for Black Law Enforcement Executives, says Clarke's confirmation is timely to continue to foster the needs of law enforcement and the American people that "are not just Republican or Democratic issues."

Clarke's hearing falls in the midst of murder trial for a White former Minneapolis police officer who was seen on cellphone video callously kneeing on a 46-year-old Black man's neck for over nine minutes until his death and days after a nearby city is grappling with the fatal shooting of a 20-year-old Black man by a White police officer who allegedly mistook her service weapon for a taser.

Coupled with the raise in hate crime attacks against Asian American Pacific Islanders and multiple mass shootings, civil rights groups have been calling for diverse leadership in the Justice Department to tackle these issues after the last administration was practically mute.

The Justice Department has routinely engaged in pattern-or-practice investigations in an effort to reform excessive force, biased policing and other unconstitutional practices by law enforcement. But in 2018, then-Attorney General Jeff Sessions signed a memo sharply limiting the use of consent decrees -- the court-approved deals between the Justice Department and local governments to map out changes for law enforcement institutions.

In written answers to the Senate Judiciary Committee in February, before his confirmation, Attorney General Merrick Garland wrote: "Consent decrees are sometimes appropriate to enact a shared goal. These agreements are not one-sided. The Justice Department has been given these tools by Congress and I believe it is important that the Department consider all tools at its disposal when tailoring resolutions."

Crawford says Clarke has the "pedigree and experience" to head the Justice Department's Civil Rights Division because she "has been in the trenches" and "has done the work" with civil rights issues while in her current role as the president of the Lawyers' Committee for Civil Rights Under Law.

As a first-generation born American with parents who immigrated from Jamaica, West Indies, Clarke's legal career began at the Justice Department which has allowed her to travel across the country into communities like Tensas Parish, Louisiana, and Clarksdale, Mississippi, she said in her opening statements that were released on Tuesday.

"Our nation is a healthier place when we respect the rights of all communities. In every role I've held, I have worked for and with people of all backgrounds -- regardless of race, national origin, religion and disability status," Clarke wrote. "I've listened deeply to all sides of debates, regardless of political affiliation. There is no substitute to listening and learning in this work, and I pledge to you that I will bring that to the role if confirmed."

On behalf the Lawyers' Committee, Clarke has publicly denounced the nominations of Supreme Court Justices Neil Gorsuch and Amy Coney Barrett in 2017 and 2020, respectively. The committee submitted statements that expressed their concerns of the abilities of Gorsuch and Barrett to "fairly interpret and apply civil rights laws" at the time their nominations were up for consideration before the Senate Judiciary committee. The Lawyer's Committee has also held White supremacy groups like the Proud Boys accountable by filing a lawsuit against them for defacing a historical Black church in Washington, DC.

Pending Clarke's confirmation, Garland announced on March 30 launching a 30-day "expedited review" to figure out how the Justice Department can "deploy all the tools at its disposal" to combat hate crimes across the country.

Regarding the allegations of antisemitism that Clarke may face from Senators, dozens of Jewish organizations including the URJ, where Rabbi Jonah Dov Pesner is a representative of their social justice office, have endorsed her nomination and denounced those who may weaponize antisemitism to stop her nomination.

In Clarke's previous role as the head of the New York State Attorney General's Civil Rights Bureau, she launched their Religious Rights Initiative that ensures religious freedoms for employees. The program provides Jewish workers the flexibility to observe the Sabbath.

Pesner who is also the director of the Religious Action Center of Reform Judaism says in a statement to CNN that "Kristen Clarke will be a strong leader at DOJ [the Department of Justice] helping defend and strengthen civil rights...at this crucial moment."

Pesner says "now, just months after a historic election when Americans voted in record numbers, systemic racism contributes to a climate in which some lawmakers are emboldened to further suppress and silence the voices of Voters of Color and other marginalized groups, as Georgia's new law will do and other states are trying."

Ultimately, Crawford says that all of Biden's Justice Department nominees "need to get confirmed as quickly as possible" to put the Civil Rights Division's relevance to work by defending everyone's rights. The Senate votes for Gupta and Lisa Monaco -- nominee for deputy attorney general -- are pending.