DOJ to ask Trump-appointed US attorneys to resign 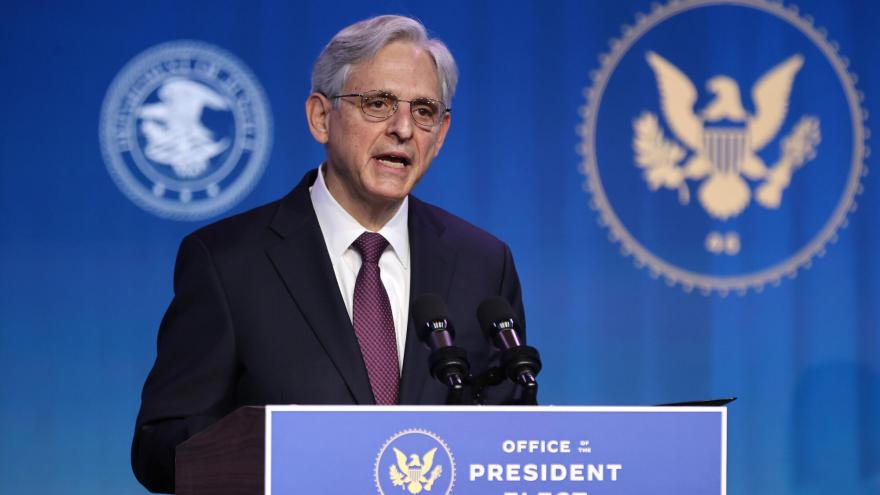 US Appeals Court Judge Merrick Garland is the President's nominee to lead the Justice Department.

In a call Monday night, acting Attorney General Monty Wilkinson asked Delaware US Attorney David Weiss to remain in office, where he is overseeing the tax probe of Hunter Biden, President Joe Biden's son. John Durham, appointed as special counsel by former Attorney General William Barr to reinvestigate the origins of the Trump-Russia probe, will also continue his work, but he is expected to resign as US attorney in Connecticut, the Justice official said.

The resignation request is expected to apply to 56 Senate-confirmed US attorneys appointed by Trump.

Justice officials have scheduled a call with US attorneys around the country to discuss a transition that is expected to take weeks. The Justice official didn't say when the resignations would take effect.

The changeover of US attorneys is routine, but is often fraught with political overtones. In 2017, then-Attorney General Jeff Sessions asked 46 Obama-appointed US attorneys to submit their resignations. A handful were allowed to stay on for a brief period, but most had to leave immediately.

Distrust of Trump-era appointees led the Biden administration to appoint a career Justice Department official as acting attorney general while it waits for the US Senate to confirm Merrick Garland, the President's nominee to lead the department.

Garland's confirmation hearing was expected to begin on February 8, but it has been delayed by former Judiciary Committee Chairman Lindsey Graham who, until this week when Democrats took formal control of the Senate, opposed moving quickly on Garland's hearing.

Graham said he needs time to question Garland on current investigations and wrote a letter on Tuesday to Wilkinson urging him "not to interfere in or call off" the investigations.

Of the 94 US attorneys serving in districts across the country, 25 are serving in acting positions after some Trump appointees resigned ahead of the Biden inauguration.

Among those the Biden administration may keep for a while, according to people briefed on the matter, are Michael Sherwin, acting US attorney in Washington, DC, who is overseeing the sprawling probe of the January 6 attack on the US Capitol. Sherwin is a career prosecutor from Miami, but was installed in DC by former Attorney General William Barr, and among the options Biden administration officials have discussed is having him continue to lead the insurrection probe, perhaps from Justice headquarters, while making room for Biden's own appointee in the DC office.

Less certain is how long acting US attorneys in New York City will remain in their posts: Seth DuCharme in Brooklyn and Audrey Strauss in Manhattan.

Some high-profile US attorneys who had not resigned ahead of Biden's inauguration included US Attorney for the Southern District of Ohio David DeVillers, Utah US Attorney John Huber and Pittsburgh US Attorney Scott Brady.

Ohio Democratic Sen. Sherrod Brown had made clear to a local news outlet that DeVillers is going to be replaced and has put out a call for resumes, according to Cleveland.com. DeVillers is currently overseeing two high-profile corruption investigations involving a former Republican lawmaker and Cincinnati council members that includes a Democrat.

Huber was first appointed by former President Barack Obama and then reappointed by Trump. During his second time as the US attorney, Huber was tasked by Sessions to reexamine a previous Justice Department investigation of Democratic presidential nominee Hillary Clinton's business dealings and the Clinton Foundation. Huber ended his probe, concluding there wasn't reason to reopen the investigation, a decision that irritated Barr, according to people briefed on the matter.

Barr tasked Brady with reviewing claims related to Ukraine and the Biden family made by Trump lawyer Rudy Giuliani.

The move was initially seen by Justice officials as a way to keep dubious allegations from Giuliani -- which Barr publicly cast doubt on -- away from other Justice Department matters.

But Brady embraced the task, former Justice Department officials say, and pushed to take investigative steps that led to internal fights with the FBI and others. The status of Brady's efforts on Ukraine remains unclear.

This story and its headline have been updated with more reporting.