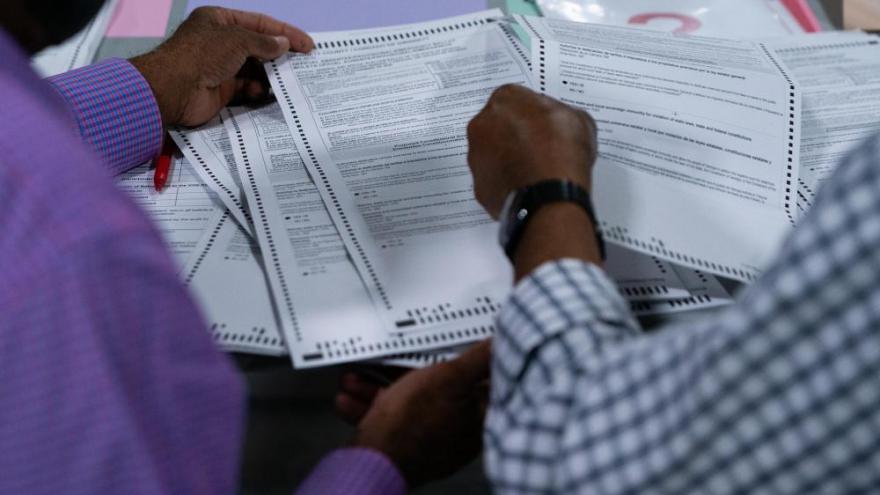 The Justice Department is launching a task force to address the rise in threats against election officials. This image shows the 2020 presidential election ballots during an audit in Lawrenceville, Georgia, on November 13, 2020.

(CNN) -- The Justice Department announced on Friday that it is launching a task force to address the rise in threats against election officials, according to a memo sent to all federal prosecutors and the FBI.

"The Department of Justice has a long history of protecting every American's right to vote, and will continue to do so. To that end, we must also work tirelessly to protect all election workers—whether they be elected officials, appointed officials, or those who volunteer their time—against the threats they face," according to the memo written by Deputy Attorney General Lisa Monaco.

Jurisdictions across the country, especially with high-stake local elections like in Fulton County, Georgia, reported receiving threats and racist taunts.

In a speech earlier this month, Attorney General Merrick Garland announced a number of steps that the Justice Department would take over the next 30 days to protect every citizen's right to vote that included doubling the staff in the Civil Rights Division.

"There are many things that are open to debate in America. But the right of all eligible citizens to vote is not one of them. The right to vote is the cornerstone of our democracy, the right from which all other rights ultimately flow," Garland said during the June 11 speech at the Justice Department's Great Hall.

The task force will include members from the Criminal Division, Civil Rights Division and the FBI to address the rise in threats against election officials. The Justice Department will also launch in the coming days a toll-free hotline for the public to use to report election-related threats.

"A threat to any election official, worker, or volunteer is, at bottom, a threat to democracy. We will promptly and vigorously prosecute offenders to protect the rights of American voters, to punish those who engage in this criminal behavior, and to send the unmistakable message that such conduct will not be tolerated," Monaco wrote, adding, "I am confident that you will meet this obligation and investigate all instances of election-related intimidation."